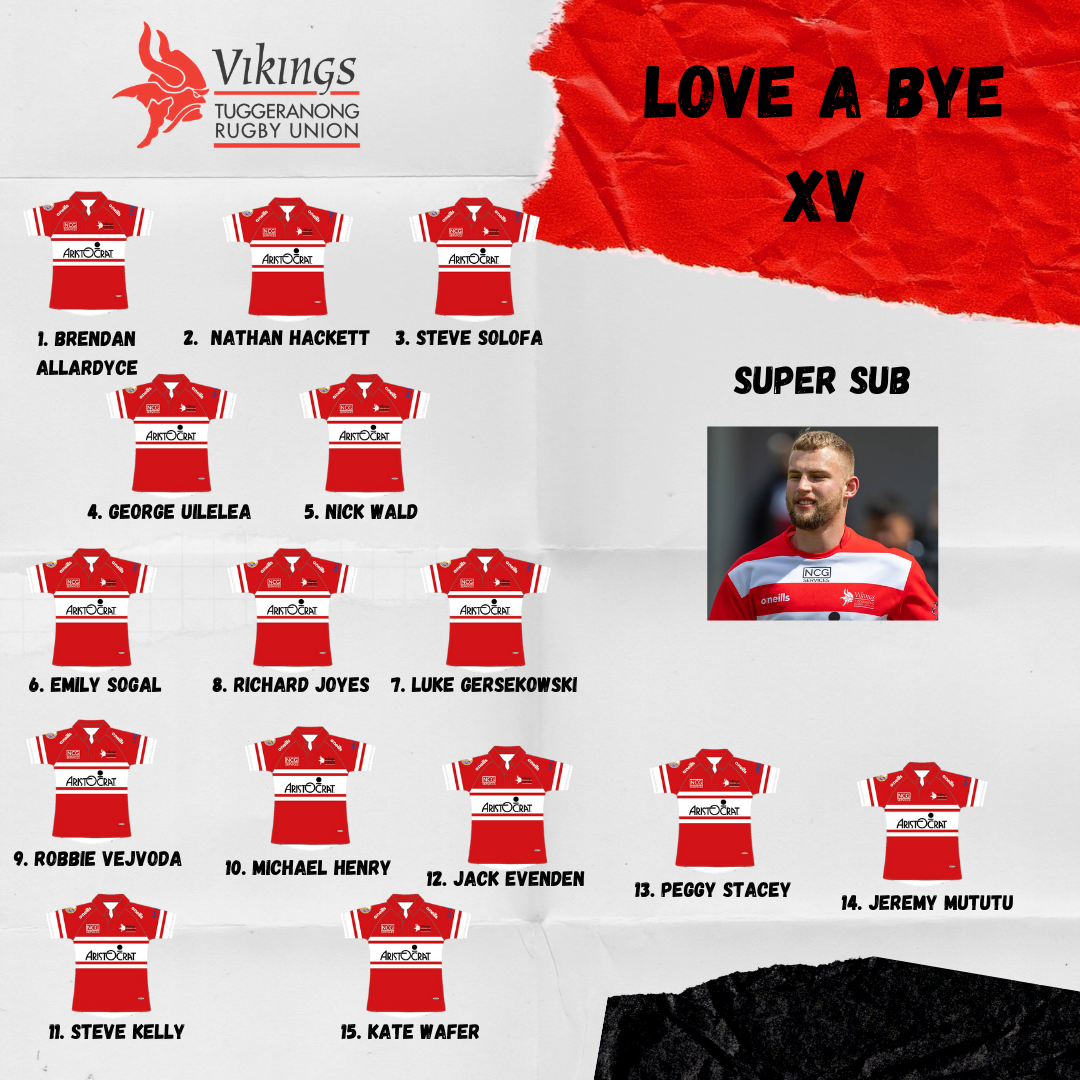 Posted at 11:04h in Uncategorized by Vikings Rugby
Share

It’s a competition Bye this weekend! No Vikings Grades will be playing, each taking a well-earned break following a testing start to the season. The Club will return to match play on the 22nd of May, when the Premier Grades face Gungahlin and the First Division and Premier Women’s jump on the bus to play Goulburn in Goulburn.

During a Bye weekend in 2019, we debuted the Love A Bye Weekend XV, to recognise those people at our great Club that just love having a mid-season break from footy. I mean, who doesn’t? Rugby gives everyone at Vikings a sense of purpose – we love seeing our mates, playing this great game and sharing in our wins and losses, but it’s always nice to kick up our feet and recuperate. We know the people selected, however, love it more than most!

We thought it was time to take a look at the team again, and select the Love a Bye XV for 2021.

Trendy is one of few to retain his spot in the Love a Bye starting side, and as the most experienced member of the group has been designated Captain. Trendy absolutely loves the Club, but he also loves his home away from home, South Coast NSW. The Pres can be found on a beach or wetting a line just about every weekend the Club has off Rugby.

Nathan is new to the Club in 2021, after having a successful stint playing for St Edmunds College. If only you could have seen Nathan’s eyes light up when he found out it was a Bye weekend. He was the first to load up his car and shoot down the coast. It has been reported he has been feverishly texting other Colts players to join him, too.

After missing all of last season through injury it has been great seeing Stevie back on the paddock in 2021. However, the amount of tape it takes to get Stevie on the field suggests that a well-earned break is in order. We know the strappers will appreciate the week off, too.

Georgie has been the king of WhatsApp and Facebook messenger groups for 3rd & 4th Grade this season, wrangling his mates to join him for post-match festivities at all hours of the day, often weeks in advance. The Bye weekend means George won’t have to worry about his mates being wrapped up playing Rugby – no excuses to hang out with him now!

You could say Waldy loves the Bye weekend because it means he gets to spend more time at the gym, but we think it’s actually all the Backs at the Club that want him to take a Bye weekend – Nick currently leads the Club as the highest try scorer. The Backs need to slow him up somehow.

Lukey G’s selection in this team reflects how valued a player he is. One more week down means one less week we have to wait to see the phenomenal talent take the field again, following his injury in Round 1. Here’s to a speedy recovery, Lukey.

Another returning player to the Love a Bye XV, Joyesy has been avoiding training like the plague in 2021. A Bye weekend gives him an excuse not to rock up on a Tuesday and Thursday, and also allows him to plan out which games he needs to participate in to play his 200th game on Hagar’s Day – a tactic not seen since Matt Wafer’s 100th in 2020.

The man must take a break at some stage. Robbie is the busiest man at the Club – he’s either calling in players to join his star-studded 4th Grade side or picking up another sponsor to join the team. We thought for his own benefit, he’d love taking the Bye weekend off.

Chic recently became a father, which is incredibly exciting. What isn’t exciting though, is leaving the warm embrace of home with his one well-behaved child, to head to a cold, wet Tuesday training where he has to look after 25 toddlers disguised as Colts. The Bye weekend gives Chic a well-earned break from a young, though extremely talented, Colts side.

Steve Kelly, an Old Boy of the Club, has recently returned as our Head of Red Army operations. The tireless worker will love having a weekend off running the Red Army, which although very rewarding is also very taxing. It also gives him the opportunity to work on creating a high definition version of ‘The Houdini’ (video here).

It must be hard for Evo carrying teams on his shoulders with his prolific goal kicking, the young Flyhalf slotting two crucial kicks in the past two weeks to give 1st Grade an edge. This man has earnt his break!

13. Peggy Stacey (Viqueen Outside Back)

Peggy has quickly become a fan favourite at the Club, her fun-loving nature an instant hit amongst the playing group. We’re led to believe, however, that she’s a fan of filming sneaky TikTok videos prior to kick off. A Bye weekend means Peggy can plan out her next viral hit.

It’s one less week that Jeremy receives the players ‘Duckhead of the Week’ jersey, given to the player with the most notorious on or off field performance on Saturday. Jeremy has held the jersey for at least 50% of its time in existence.

It has been a frustrating start to the year for injuries at the Club, something Kate knows all too well. The Bye weekend means Kathy won’t have to bounce around like a pinball at games, dealing with new and existing injuries.

The calls from our 3rd & 4th Grade players for cult hero Kaleb to be included in more select teams have been heard. The man who is perhaps everyone’s favourite person (alongside Pete Henry) finally gets the call up as the team’s Super Sub. We actually don’t think Kaleb loves Bye’s, given how much he loves Rugby, training and just being around the Club. But it’s hard to deny Kaleb a spot in this team, given how great he has been as 4th Grade’s Super Sub in recent weeks. We love your work, mate!

Who would you pick for the Love A Bye XV?