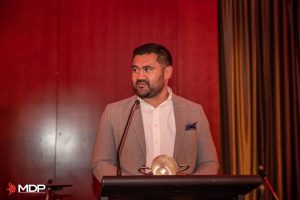 18 years. I’ve played at least a game or more a year. I’ve been in the Committee for 3 years.

I wanted to know who was behind all the shocking red training kit that was being designed and endorsed. I’ve come to the conclusion that Callum Smith should not have a say in anything regarding Vikings training and off field kit. I’ve also enjoyed giving back to the Club and the people by advocating for them from a Committee seat.

For me, it’s been easy to love the Club. From the time I arrived in mid-2000 till now, I’ve admired how the place was run. The people, life-long friendships and memories on and off the field are special to me.

All the premierships have been special but a heap of times when my girls were young, they’d call out to me and wave while I was playing. I see kids do that still at the grounds and it reminds me of them at that age. Anytime I played with Lix (Lix Lealiifano) and Mokoz (Beau Mokotupu) was always a highlight. We’d always laugh at each other or give each other grief about a missed tackle, dropped ball, crap pass. Mokoz would blow up and people would be scared, Lix and I would just laugh at him.

You were known for being an enforcer on the Rugby Field – who did you share your biggest rivalry with from another Club?

Well, I loved playing against Royals. Leading in to those games, I would always play myself in to some fitness and form knowing I wanted to play well and more often or not put a shot on. My eyes would light up when someone ran it straight at me or I saw ribs open at a ruck or maul. I won’t mention names but people from both Clubs would get in to my ear about a certain player and as much as I tried to ignore it, we’d end up in a heated argument, fight, a stray boot to the head, hands, back or groin. Good old days.