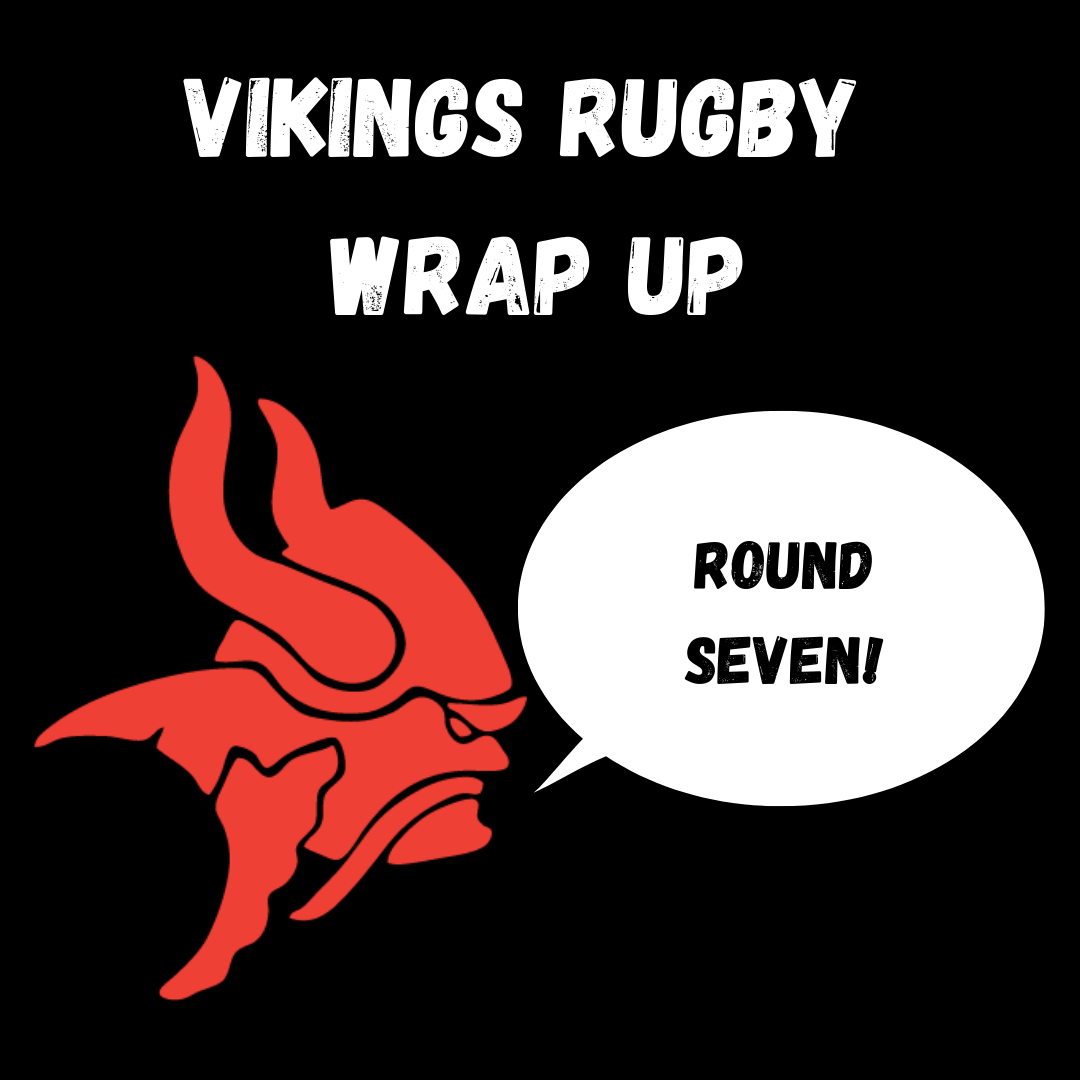 Posted at 16:21h in Uncategorized by Vikings Rugby
Share

The Vikings were out at Jamison Oval on Saturday, playing Wests Rugby Club for their seventh match of the season. The Vikings enjoyed all the spoils on the day, going 5 from 5 in an excellent display of Rugby across the Grades. Notably, 3rd Grade won their first game for the season, ensuring there were plenty of smiles all round. Take a look at the match report for each Grade below.

A largely positive weekend for our Gen Red teams, who went 3 from 5 against tough opposition. The U16 Boys continue their strong start to the season! Find out more about our Gen Red Program.

Victoria’s lock-down became 4th Grades silver lining – welcome back, Rhys Griffiths! A disciplined effort allowed the Vikings a chance to showcase Forward dominance and skills in the back line. However, it was the Rhys Griffiths and Amani Lalofau show, with a late try to evergreen Richard Joyes the icing on the cake in a good win. Rhys crossed for a hat trick of tries, while Amani kicked all four conversions. Notable from the match was some stoic defence on the Vikings line in the shadow of halftime to keep Wests scoreless, and of course, Rhys Griffiths just about carrying the team to an awesome victory. 4th Grade remain undefeated and in good knick. Vikings 28 – 5 Wests.

The Thirsty Thirds were able to come away with their first win of the year, in a hard fought game against Wests. The Vikings started a few players short, with several men absent with work commitments. Stephen Sanday, who ran onto the field 5 minutes after kick off, scored a try on his second touch of the ball to open the day for the Vikings, following some great phase play. The Red Men were next on the board, big Mitch Rainey barging over for a solid try to put the Vikings up by two scores. Wests hit back shortly after to keep in touch of the Vikings. It was an arm wrestle in the middle of the field, both teams making good ground, but neither able to break the other. Following a line break from Maleli Gadai and some good phase play, Steve Sanday crossed for his second try of the day. The Vikings took their foot off the pedal just before half time, allowing Wests to sneak in to see the Red Men into the sheds with a narrow 19-12 lead. The second half started slowly for the Vikings, and Wests took the opportunity by dotting down for a try. Not to be out done, skipper Robbie McNeill crashed over for a try of his own to extend the Vikings lead. The last 10 minutes were nerve-racking, Wests desperate for a come from behind win and several Vikings players falling to injury. With only 3 minutes left on the clock, Wests scored in the corner, the kick to come required to level the scores. Fortunately, the kick was pushed wide and the Vikings held a two point lead. With seconds remaining to play, Wests broke the Vikings defence and were hot on attack, before super-sub Rhys Griffiths came up with a crucial ruck turnover, sealing the game for 3rd Grade. An excellent result for the boys, who haven’t tasted victory in two seasons. Vikings 24 – 22 Wests.

After a few lacklustre performances, the Colties were looking to nab a crucial win to keep them in the hunt for a top 4 finish. The Vikings started well, with a brilliant eight phase passage that ended in a try to Kai Bower, the first of his hat trick for the day. It was pleasing to see the Vikings spread the ball wide to great effect, resulting in several scoring opportunities. A high penalty count against the Red Men highlighted some ill-discipline, which gave Wests some crucial scoring opportunities. As a result, the Vikings went into half time trailing their opponents. However, some great defence to keep Wests at bay several times on the Vikings line showed the character of this young team, and Coach Henry was enthusiastic and complementary of the improved effort. The Vikings responded with renewed vigour. Pacey Winger Jonty Godfrey scored two tries, and Sam Gibson bagged his first for the Club with a bustling run up the centre. Hooker Joel Leiper also crossed for a meat pie, and Kai Bower finished the scoring for the day with his aforementioned hat trick. The performer of the day was Lachie Davis, who had an outstanding work rate in close, out wide and, uncharacteristically for a Fullback, was involved in rucks and mauls to make sure the Vikings line was well defended. A special mention to Clayton Hawke and Mitch Rainey, who played a huge role in 3rd Grade’s drought breaking victory as well as helping the Colts secure theirs. Well done to the boys. Vikings 43 – 31 Wests.

The Dirty Twos, playing in the coldest game of the year, pulled off an excellent win in leg four of five against Wests at Jamison. Six tries were scored, with Nick Wald relishing a return to Lock, scoring his sixth try for the season. This was followed by Mr Dependable Josh Southwell-Nobbs, Trai ‘Daddy Bump’ Henderson, Kieran Reilly and Le Captain Brendan Le Galludec. JD Lealiifano showed the benefits of kicking practice (or was lent boots from Uncle Christian) by slotting four conversions. Cameos by Club favourite Michael Oakman-Hunt on his comeback from injury was appreciated, and Isaac Thompson directed the back line superbly. A special mention to Aedan Biliards, who in his run-on debut for 2nd Grade looked like a seasoned veteran, winning Player’s Player. 2nd Grade also welcomed back Assistant Manager Steve Peak and Travis Pula, who both contributed to the win. The Dirty Twos are one point off 1st place. Vikings 38 – 14 Wests.

The Vikings were ready to make amends for their only loss of the season against the Lions, and eager to break their drought at Jamison Oval, a venue they have not tasted victory at in three seasons.

The Red Men applied early pressure with great controlled play, allowing Nigel Ah Wong to grab a 5-pointer after five minutes, Rod Iona adding the extras. Some more enterprising play saw Jack Wright collect a well placed kick to stroll over near the posts, extending the Vikings lead 14-0. Wests were next to score and narrow this lead, however Andrew Robinson intercepting a pass to take the ball deep into the Lions territory. Stuck on his treadmill, Robbo went to deck and allowed Max Ravouvou to do the rest, the Fijian Flyer scoring his first try of the day. A penalty goal to Wests had the scoreline at 19-10 at half time.

It was all the Vikings in the second half – Max Ravouvou scored his second try of the afternoon after some great phase play, and Callum Smith crashed over not long after to put the Vikings well ahead at 31-10. Some great footy from Tom Watego allowed Pat Maka to cross for a try, and then some excellent lineout play saw James Douglas scamper over out wide. A late try to Wests and Tommy Watego sealed the scoring for the afternoon, the Red Men earning an extremely rewarding win. Vikings 50 – 15 Wests.

That’s a wrap for Round 7. A special mention to our long-time physio, Kate Wafer, who ran her last game for the Vikings on Saturday. Thanks so much for all your support over the years Kate, we wish you the best of luck for your future!

It’s a competition Bye this Saturday the 12th of June. The Vikings return to action on the 19th of June, when all Grades play the Uni-North Owls at Viking Park. Stay tuned to our social media for more information on game times! 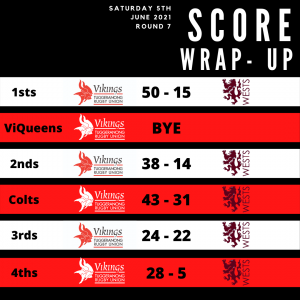