Posted at 15:29h in Uncategorized by Vikings Rugby
Share

It was a full Club day at Viking Park on Saturday, with the Vikings taking on the Uni-North Owls across the Grades. Some crucial wins saw us go 4 from 6, which included 1st Grade’s top of the table win and successful defense of the Bob Hitchcock Shield. Take a look at the match report for each Grade below.

A solid weekend for our Gen Red teams, who went 3 from 4 on Saturday, notching some big wins. Find out more about our Gen Red Program here.

Your typical game of two halves demonstrated by the 4th grade boys on the weekend, albeit with a little Rea of sunshine (brothers Harlem, Bayven and Lawrence Rea all played their first game together). The Vikings got off to a flyer with James ‘Bindi’ Erwin crossing the line two minutes into the game. From there the Vikings owned the half, Bindi dotting down for a brace with Bayven Rea and Tino Lalofau also adding to the Vikings lead. The Red Men went into halftime 24-0.

The second half was all Owls. Scoring four tries of their own and converting one brought about a grand stand finish, 24-22. Despite their second half bungle, 4th Grade held on, and Amani Lalofau kicked a penalty goal in overtime to seal victory and keep 4th Grade undefeated in 2021. The team welcomed back boy wonder Jayme Field, who had a dynamic game in the backrow, while Kadin Te Nana continues to impress with some flashy skills at Scrumhalf. 2nd Grade Hall of Famer Richard Joyes picked up the Player’s Player points and now sits five games short of 200 games for the Vikings. 4th Grade sitting pretty at 6-0. Vikings 27 – 22 Owls.

The Thirsty Thirds won the toss and elected to put the gale force wind at their back. Unfortunately, the Vikings didn’t start well, losing the ball off the kick off and then not handling the early pressure applied by the Owls, who put two quick tries on the Vikings. Hard man Jak McAlister did all he could to breath fire into the belly of the Vikings, rolling up his sleeves for some barnstorming runs, putting on huge hits and getting through a mountain of work. Though they had times of good field position in the first half, the Vikings struggling with continuity, which allowed Uni to regather possession and make their way out of danger.

In the second half, the Vikings came out strong by scoring two quick tries to put the Owls on the back foot. The Red Men’s handling issues continued, however, and Uni were able to capitalise on the Vikings mistakes several times to put the game out of reach. Vikings Billy Phimphravichith is enjoying a change of pace from Flyhalf, while Callum Roles is benefiting from another year under his belt of senior Rugby. If 3’s can start each week the way they came out in the second half, they will be a challenge for most teams in the competition. Vikings 10 – 46 Owls.

At the start of the week the Colts team were bolstered by the inclusion of three players that have featured heavily up the Grades – JD Lealiifano, Remsy Lemisio and try scoring machine Nick Wald. The addition of these players seemed to make an impact, and all played a big part in the win against Uni-Norths. Two early tries to the opposition had the team under pressure, but the Vikings responded well with tries to Jonty Godfrey and Nick Wald. Waldy then produced a great try saving tackle, running almost 70m to bring down his opponent metres from the Vikings try line. Unfortunately Nick sustained a head knock in the process and was removed from the field of play.

Some great defensive efforts saw the Vikings go into the break a few points down, but the coaching staff were happy with the improvements in the team. Tries to Kye Pearson and Remsy Lemisio in the second half put the Red Men out in front. Daryl Bailey was everywhere, and Willy Penitani put on two massive hits that sent shudders through the opposition. Chris Caruana has now strung several great games together, the young Centre only returning from injury recently. A long range penalty conversion from JD Lealiifano put the Vikings out of reach of the tough Uni-Norths outfit and denied them a bonus point. Nice work, lads! Vikings 27 – 19 Owls.

With the cold and blustery weather continuing at Viking Park, the Dirty Twos gave the Uni-North Owls a lesson in try scoring and defense. Five tries were scored by the Backs, four of those converted by Isaac Thompson. Zaccy seems to be enjoying the least frenetic pace of the Spence Cup, playing another masterful game at Flyhalf, that was highlighted by a deft kick through for Kieran Reilly to grab his second of the day. Try scoring phenomena Josh Southwell-Nobbs helped himself to his own brace, while Lachie Davis showed some filthy footwork to bambozzle the Owls defense for an excellent try.

Kerry McInerney had a welcome return to the field and a full shift at Flanker, and Big Kalvin Hemara from Colts got some game time at Prop which he seemed to enjoy. TJ Sione had one of his best games in a Viking jersey, playing like a raging bull to lead his forward pack by example. Coaches Going and Lealiifano seemed happy with the nil score by the Owls, though hard to tell as both have sub-human heart rates and rarely get excited. Big win for Vikings 2nd Grade, who have a chance at redemption next week against Royals. Vikings 33 – 0 Owls.

The ViQueens were looking to replicate their excellent win against the Owls in Round 3. In a great day for Women’s Rugby, Club stalwarts Emily ‘Seabomb’ Sogal and Lou Bush-Taliai played their 50th game for the ViQueens, an excellent achievement for two revered players at our Club. On the other end of the spectrum, the ViQueens welcomed debutants Samara Afele and Taylah Grady, while two former players in Monique Henderson and Caitlin Fazey donned the jersey once again. The ViQueens had a tough day at the office, being down two players at half time. Despite their circumstances, the girls barred up in defense and gave everything they had to keep the Owls at bay.

Lily Hawthorn was excellent from the Wing, her development into a fine player evident in her first year of senior Rugby. Lauren Freeman had a typically tough game, as did Lou Bush-Taliai, who was determined to make an impact in her milestone match. Zoe Podmore continues to prove her worth to this side, having a commanding game from Flyhalf. Though a solid outing overall for the girls, they were unable to overcome the strength of a resurgent Uni-Norths side. ViQueens 7 – 20 Owls.

The Vikings returned from their weekend off ready to defend the Bob Hitchcock Shield, against the 2nd-placed Uni-North Owls. It was a special match for Club favourite Andrew Robinson, who marked his 100th game for the Vikings. The match had barely commenced when the Owls got on the scoreboard, thanks to a penalty kick at goal. The Vikings hit back quickly however, Tom Watego grabbing his first try of the afternoon after a well worked lineout move, 5 minutes into the game. Michael Oakman-Hunt notched his own 5-pointer in his return to 1st Grade, following some great lead up play by the Red Men. The scores were locked at 10-3 heading into half time.

Tom Watego, who had an enormous game, opened the scoring in the second half by nabbing his second try of the day, following a charge down and some controlled play by the Vikings. The Owls were able to narrow the lead with a converted try of their own, but this would be their last score for the afternoon. The Vikings took a complete stranglehold of the match; mercurial captain Seamus Smith darted over for a try in the corner to open the Vikings second half stanza. Trai Henderson was proving a handful with some bustling runs through the Centre, which allowed James Douglas to bag a meat pie of his own. Tom Hooper made a welcome return from rep duties to score next to the posts, Andrew Robinson adding the extras in touching fashion. Once the Vikings got going, there was no way the Owls were going to stop them. A well-deserved victory for the Red Men, who further extend their lead in 1st place on the ladder, and retain the Bob Hitchcock Shield. Vikings 36 – 10 Owls.

That’s a wrap for Round 8. Every Grade will make their way to Phillip Oval this Saturday to play Royals. It won’t be a day of Rugby to miss! Stay tuned to our social media and website for more information on game times. 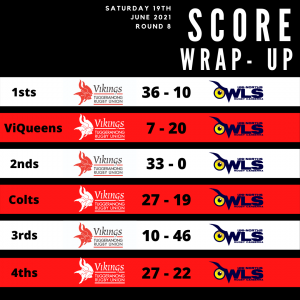