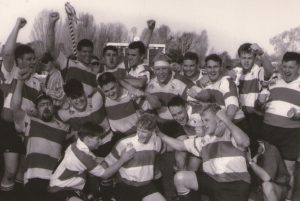 “The vision of Vikings rugby continues to be dominated by an inherent desire to offer its players the very best level of rugby”.

From humble beginnings in 1973, the Tuggeranong Vikings have developed into a rugby powerhouse, with high aspirations and an aggressive administration. Uniquely positioned in Canberra, with a large and successful licensed club organisation behind it, there has long been a commitment from the Viking’s management that players should be presented with an opportunity to play at whatever level they so desire and has also sought to develop the overall standard of the ACT representative competition for the benefit of players from all clubs.

In the early 90′s this meant that a large number of the Club’s home grown stars such as Joe Roff, Craig Sweeny, Dean Zammitt, Justin Harrison, James Swan, David Grimmomd, and Brenden Jones took the big step up to form the backbone of the inaugural Canberra Kookaburras, in the tough AAMI Cup Competition, and in the mid-90′s many of these players again formed the nucleus of the fledgling ACT Brumbies in the then Super 12 competition, with Roff and Harrison both going on to become long term Wallaby players and Roff in particular becoming one of the legends of the game, both in Australia and overseas.

The Club took this player drain in its stride and continues to develop and push forward the stars of the future, often to the detriment of its’ own on-field success.

In recent times this new brigade of Vikings young guns, such as Julian Salvi, John Ulugia, Frankie Fainifo, Christian Lealiifano and Joey Powell have continued to carry the torch into the arena of professional rugby with the Brumbies. The emergence of a full time sevens circuit has also provided an alternative professional pathway for Vikings players such as Jesse Parahi to forge successful careers.

The early days of Vikings rugby were spent in the Canberra Cup as Woden-Weston where they proved themselves a formidable club, with aspirations to greater heights. The A.C.T Senior Grade Competition beckoned and after strong on-field results and a sustained growth in player registrations, plans were made to enter the ‘big time’ of the ACT’s senior club competition. After a name change, a geographical relocation and the building of a small licensed Club premises the time seemed right. Enter the Tuggeranong Vikings.

The senior grades of rugby in the A.C.T Competition proved very demanding and although the Club was determined to succeed, the player depth was sadly lacking. It proved a tough initiation for those involved and provided many hard lessons both on and off the field. It is fair to say the Club was underdone and after a brief sojourn they were relegated to a lower grade competition to undergo an ‘apprenticeship’ period.

During the hiatus the Viking’s ambitious administrators made good use of their time. The licensed Club was thriving as the population in the Club’s drawing area was increasing rapidly. Rugby too was enjoying boom times as the Wallabies swept all before them. An application to re-enter the senior grade competition in 1986 was successfully lodged and players were attracted from around the globe to become part of the campaign.

Eminent rugby citizen and Wallaby forward, Tom Barker, took on the coaching role and proved a worthy choice. His work on skill development and his efforts to adopt a more professional attitude, both on and off the field, were solid foundations for the future. While the results were not outstanding, the resolve was ever present, and the renowned spirit of the Vikings was gathering momentum.

Duncan Hall took over as Club Coach in 1989 and the ‘foundations’ laid by Tom Barker were built upon by the Wallaby legend. A competitive and aggressive edge was instilled during this time and performances in the Hall years were to reach new heights.

In 1991 the First Grade team came within a whisker of winning its maiden Grand Final, going down by a point to arch rivals Royals, but the longing for victory only intensified with an absence from the Grand Final stage over the next two years.

Bob Hitchcock, Canberra’s best known coach, followed Duncan Hall in 1993 and maintained the Club’s highly competitive on-field performances. Due to ill-health Hitchcock’s stay with the Club was cut short after one year. His successor, the relatively unknown Chris Hickey, came on board for season 1994.

Armed with fresh ideas and a talented and experienced senior squad, led by former South African test captain and backrower Jannie Breedt, his charter was simple – WIN. He did not disappoint.

His creed of ‘whatever it takes’ soon echoed throughout the Club’s ranks and as his ‘underdogs’ won the First Grade Premiership, they were joined in victory by Second Grade in a dominant double against Royals in the changing of the guard.

Since that great day the Club has continued on its winning ways by securing its first Club Championship in 1995 and the same year winning the top three grade premierships. Further success in 1996, albeit in the Colt’s Grade, meant the tradition of winning was maintained and the hunger revitalised.

More premierships followed for the first grade side in 1997, ’98, ’99, 2004 and 2006 under the astute guidance of Hickey, Graham Reed, Brendan Allardyce and Baden Stephenson, as well as numerous premierships in other grades. An enduring rivalry with a resurgent Queanbeyan Whites was established with a memorable after the siren victory in the 2009 decider, with coach Glen Christini putting his own stamp on the club in this era.

The establishment of the V ikings Rugby Academy in 2011 has laid the platform for sustainable success, with local players increasingly forming the core of premiership teams in 2011 and 2012 (under Dan McKellar), 2013 and 2014 (under Brad Harris) and 2016 (under Tim Sampson).

The advent of Brumbies rugby in Canberra has heightened the need for an increased standard of competition for more players. Regular pre-season fixtures against Sydney and Brisbane teams have allowed the club to maintain contact with clubs in these ‘big brother’ competitions, with memorable victories over Sunnybank and Sydney Uni in 2012 highlighting the quality of Vikings rugby. The advent of a post-season National Rugby Championship in 2014 has also given numerous players the opportunity to graduate from Vikings to the Canberra representative team.

Today the playing depth of the Club is at an all time high. With a vast junior organisation and a strong operational base staffed by a full-time Rugby Manager, a Director of Coaching, a Development Officer and a medical and support staff that is the envy of fully professional clubs many times our size.

The Tuggeranong Vikings firmly believe that they have built an organisation capable of accepting and rising to the challenges of the next level of rugby – whatever they may be.