Posted at 15:30h in Uncategorized by Vikings Rugby
Share

All Vikings Grades had a game on Saturday, our Premier Grades playing at Phillip Oval against Royals, while our First Division boys took on ADFA at Dowsett Field. It was a largely positive day for the Club, as we went 3 from 6. Take a look at the match report for each Grade below.

Our Gen Red Teams had an awesome weekend, winning 4 games and drawing 1. You can find out more about our Gen Red program by clicking here.

Our 4th Grade boys got things underway at Dowsett Field, taking on ADFA. The Vikings started like a house on fire, racing out to a 14 – 0 lead after 10 minutes. As with 4th Grade’s conditioning block on a Thursday evening, they quickly ran out of steam, and were unable to add to their lead heading into halftime. Some great defence kept ADFA at bay, however. A slow start to the second half allowed ADFA to score first after the break, but this was the last time the Vikings opponents would cross the line, as the Red Men ran in the next three tries to seal victory. The ageless Richard Joyes made a welcome return, scoring a brace of tries, while Rowland Mateyawa continues to be a huge influence on this 4th Grade side. Vikings 4th Grade remain undefeated to start the year. Vikings 33 – 5 ADFA.

The Thirsty Thirds played their first game of the year, after a very long preseason. The Vikings started the game by receiving the kick off, ADFA putting plenty of pressure on in the first 5 minutes of the match. Flyhalf Jayden Macken, going for an exit kick, strained his hamstring and was carried off, James ‘Bindi’ Erwin coming on as an earlier than expected replacement. Despite missing their playmaker, the team worked their way down the paddock through strong and direct running, the Forwards doing the tough stuff to set up Maleli Gadai for the first try of the season. ADFA hit back quickly, a lapse in defence allowing them to score a try in the corner. A yellow card to the Vikings had ADFA scoring again, and took them into the halftime break with the lead. The Vikings had dominated possession and territory throughout the half, however, and were unlucky with several missed scoring opportunities. The talk remained positive and the boys were keen to get back into it. The second half started like the first, the Vikings coming out of the gates quickly. However, Khalil Waiariki-Wilson was given 10 in the bin, and ADFA capitalised by scoring another two tries with the Vikings down to 14 men. The injection of reserves revitalised the Vikings, and the team started steam-rolling their opponents. The scrum was dominant and the backs were like battering rams. Super Sub Kaleb ‘Cadbury’ Dalla Costa was charging into the cadets with fury, spurring his side on. After being awarded a penalty try and getting right back into the thick of the game, the Vikings had a lineout close to the ADFA line, which was won superbly by Cadbury. The Red Men bashed their way across, but unfortunately it was too little too late, the Vikings going down. A great first game for the boys, none the less. Vikings 21 – 26 ADFA.

A slightly disjointed start for the Colties, who lost backrowers Nick Wald and Daryl Bailey through promotion to 2nd Grade and illness, respectively, on the morning of match day. Hooker Joel Leiper made the switch to No. 8, an unfamiliar role, and Francois Le Grange was given a late call up from 4th Grade to join the Colts bench. Despite these wholesale changes, the Vikings Colts had a good afternoon at Phillip. Once again, the warm up was not up to standard and this was reflected in the Vikings first half performance. Joel Leiper scored a brilliant try to keep the Vikings in touch, but the Colties would need to lift their intensity if they were to take victory from Royals. A halftime spray from Coach Henry seemed to jolt the team into action, Tommy Lachlan scoring a great individual try to get the Vikings back into their groove. A yellow card against the Vikings put them under pressure once more, but they responded well and kept the intensity high. Some great individual efforts from Josh Story and Ethan ‘Trai Jr’ Makaua-Farani kept momentum on the Vikings side. A second try to Joel Leiper and one to Josh Story allowed the Vikings to keep their strangle hold on Royals, who barely touched the ball in the final 20 minutes of the second half. A late try to Lachie Davis well and truly sealed victory for the Red men, who sung a stirring and enthusiastic rendition of the Club song in the change rooms. Vikings 33 – 19 Royals.

As with the Colts, the Dirty Twos had their preparation disrupted slightly through some last minute team changes. They would lose their first game of the season against a very willing Royals side, who will provide some entertaining matches for the remainder of the season. It was a tight tussle between the two sides in the first half, neither team able to break the other, and some handling errors costing the Vikings vital field position. The beginning of the second half saw the Vikings click into gear, taking the lead and looking like a dangerous team with ball in hand. However, some key lapses in defence and a shifting of momentum allowed Royals to take control of the game, and the Vikings 4 tries were not enough to see out Royals 5. JD Lealiifano scored 16 of the Vikings 26 points, continuing his great run of form. Nick Wald kept up his try scoring form, dotting down for another 5 pointer and Captain Chin grabbed one himself. A welcome return from Bailey Goymer-Peak, Trai ‘Daddy Bump’ Henderson and Travis Pula added some extra flair to the Vikings that they will appreciate in the weeks to come. 2nd Grade head into the bye looking forward to their match with the Eagles on the 22nd of May. Vikings 26 – 31 Royals.

After a hard fought win over the well drilled Uni-North Owls the week previous, the assignment of taking on the 2020 Premiers, Royals, wasn’t any easier for a ViQueens side who were still battered and bruised. The game started off slow, both sides building some solid passages of attack. Handling errors and discipline marred the ViQueens advance, and would be a running theme for the remainder of the match. Captain Tayla Stanford continued her excellent form, with dominant running and skillful offloads, however she was taken from the field 15 minutes into the match with a hamstring injury. At the halftime break, the only thing separating the two sides was 2 points, with Royals taking the lead 7 -5 after sustained pressure following a Vikings yellow card. The second half was a war of attrition, the ViQueens injury toll continuing to rise which resulted in the girls playing with only 12 players for the remainder of the match. Molly Carr was solid throughout the game, making crucial tackles and running the team out of trouble. Sharon Waihape, who gets younger with every game, outplayed her daughter Zali while Livinia Samoa was a human highlight hitting machine. Livinia’s introduction, plus Milika (Mil) Tuinakauvadra to the ViQueens ranks lifted the group, Livinia’s bone crunching tackles and Mil’s strong ball carries impressing Coach Petersen and Sinclair. Mil unfortunately was taken to hospital due to injury, but we are happy to report that she is recovering well and in good spirits. The ViQueens were unable to overcome the loss of their key players, and will welcome the Bye week break to ease the toll of injury. ViQueens 10 – 12 Royals.

As is typical between these two sides, the 1st Grade match was a highly anticipated one, and it did not disappoint with a come from behind victory for the Red Men to savour. Royals opened the scoring after 2 minutes of play with a penalty goal, but the Vikings were quick to respond through the boot of Jack Evenden who leveled the scores. Royals, however, had all the momentum from this point on, skipping out to a commanding 22 – 3 lead with less than 8 minutes remaining in the first half. Some smart backline play saw flying Fijian Max Ravouvou cross out wide to get the Vikings their first try of the match, but they still had plenty of work to do if they were going to take victory in this grudge match. The Vikings came out in the second half determined to lift their pace and power across the park, and it wasn’t long before 1st Grade starting debutant Liam Bilston was able to plunge over to bring the Vikings within 7 points of their rivals. With Cameron Holt and Jack Wright leading the way in the forwards and Andrew Robinson continuing his stellar form out in the backs, the Red Men were well and truly back in the contest. With the clock ticking down, Tom Watego, who had been destructive with ball in hand all game, was able to crash over after some great lineout play. Jack Evenden converted from the sideline to tie things up 22 all. A penalty goal allowed the Vikings to take the lead for the first time in the game, only for Royals to tie it up again with a penalty kick of their own. Some controlled play and great teamwork close to the line resulted in Nigel Ah Wong plowing over for a converted try to complete the comeback win, the Red Men earning their break next weekend. Vikings 32 – 25 Royals.

That’s a wrap for Round 4. The entire Club has a Bye this Saturday, and will enjoy a week’s break after an arduous start to the year. 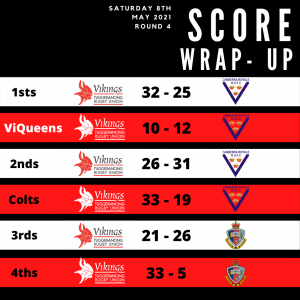