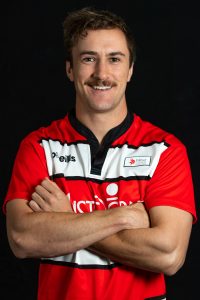 Rugby Position: Outside Back

Games Played for the Vikings: 86

I have been playing for the club for the last 7 years, since finishing school in 2012. I joined the committee at the end of 2019.

Callum Smith (the former CC) was forced to flee the country, and the chance to be more involved with off field activities.

The quick formed mateships and sense of belonging, and the culture that emphasizes high standards and improvement.

Too many to count, but a couple of favourites would be:

– Trips away. Bathurst 2013 will always hold a special place.

– Grand finals and accompanying celebrations/mourning that would follow over the weekend.

Your family has a rich and successful history with the Club – Michael Henry, Pat Langtry, James Dimmock and even Pete Henry. What kind of legacy do you hope to leave with the Vikings?

I don’t know about leaving a legacy behind, but I want to contribute in a way that enables younger players at the club, particularly colts aged players, to have similar enjoyable experiences with Vikings that older players and staff afforded me when I arrived.

As for the family remark, that’s a mixed bag of names you mentioned. I hope that I can finish on the right side of the ‘proud’ vs. ‘disappointment’ line for my family. I will let you decide which side of the line those names are currently at.