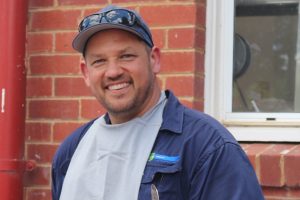 Rugby Position: I’ve played every position in the forwards and several short lived cameos in the 3rd Grade backline.

Games Played for the Vikings: 82

I’ve been involved with the Club since 2001 as a player, manager, coach, sponsor and Committee Member.

A passion for the Club, players and members.

Vikings is a great family club to be involved with. I have made many life long friends through the involvement with the club both as a player, manager & supporter.

Making my 1st Grade debut for the Club at the young age of 29 & winning multiple 4th Grade Premierships in a row (3 I think from memory).

You’ve had various roles at the Club as stated above – you’re now an avid supporter who attends just about every Vikings game. Which current player are you looking forward to watching in 2019 and why?

Luke Gersekowski and Cooper Taekata. I had a big part in getting Luke to the Vikings after leaving St Edmunds College after Year 12 and I have had Cooper working with me since April 2018. Both are great young men and I have enjoyed watching them start off in Colts and progressing to make their 1st Grade debuts.