Posted at 17:50h in Uncategorized by Vikings Rugby
Share

Beautiful weather welcomed all grades, as they took on old foes Canberra Royals at Phillip. It marked the final regular season games for First Division (3rd & 4th Grades) and the second last regular season game before the final series begin. The competition was fierce. Take a look at the match report for each grade below.

What a fine day for rugby! Sunshine & lollipops.

The victory over Royals featured 9 individual try scorers with Jayme Field bagging his usual double. Amani Lolofau, John Totini & Semisi Quloa shared the spoils with kicking duties. The final score of 69-15 wrapped up a great season for 4th Grade, who have won 12 from 12 and head into the finals as minor premiers. Details for the upcoming finals series to be confirmed and shared ahead of the weekend. Well done 4’s!

Last game of the regular season for 3rd grade last weekend, with a tough hit out expected from the second placed Royals team it was going to be an uphill battle from the start.

The game started well with good defence and a strong forward pack, Vikings were able to get the first points via a penalty goal from Maleli Gadai. Royals pounced on a dropped ball a few phases after the restart and their slick backline scored the first try.  Not long after Royals found a chink in the defence and exploited it to get a quick second try.

Both teams battled hard in the boggy ground, the Viking forwards provided a good platform for the backs whilst Royals slick backline were relentless in their attack. Despite the Vikings powerful scrum pushing Royals all over the place they were un able to capitalise and just before half time Maleli Gadai got shown the cheese for an apparent tackle on “suspicion” . Royals then went on to score late in the first half. And go into the break 21-3

Despite being down by 3 tries the Vikings came out strong in the second half and with the and looked like there was a massive change in momentum. Royals again got a try though some good draw and pass but Vikings weren’t worried. The scrum came into its own and the power of the Vikings forwards showed with a magnificent display of power and finesse to get a push over try to Callum Roles from 15m out!  The forward dominance continued and the backs reacted well to the pressure from the Royals backline it was a good arm wrestle for the major part of the second half.

With 25 mis to go Vikings suffered from a moment of ill discipline and lost a player to a red card send off. But this didn’t stop the Vikings unrelenting pressure in the scrum. With a man down they again drove the Royals back and Jordan Kilcoyne nabbed a great half back try.

There were a couple of missed opportunities which would have brought the score closer.  Despite going down 26-15 the Vikings showed they are ready for the challenges ahead in next few weeks of finals footy.

The Colts match was a very disappointing affair. The referee did not have a feel for the game and made some dubious calls especially at the scrum but the Vikings should have been able to overcome those hurdles but were let down with poor discipline. Vikings started well with a great try to Joel Leiper but then dropped their concentration and let the opposition score two very easy tries. The Colts had a big opportunity with a penalty 5m out and a dominant scrum that would have definitely pushed over for a score near the posts but instead we engaged in niggle with the opposition and the penalty was reversed and the opportunity lost. Remsy Lemsio had some barnstorming runs and scored a good try and had another disallowed. There was also some good backline movements, one that resulted in a try to Chris Caruana. We put Royals on the back foot with a few well-placed kicks from Captain Ryan Hoare and kept applying the pressure but then received a penalty and lost all that momentum. In the end each it was 4 tries a piece, Royals converted 3 and Vikings converted 2, with Royals winning 26 – 24 and relegating Vikings to 4th place

First v Second on the table game at Phillip District and after a pretty dour 70mins Vikings 2nds were able to claim first spot on the back of a 17-12 win!

Led from the front by Captain Taekata we scored 3 tries to Royals 2. Try scorers were Nick Wald, Travis Pula and another great halfback snipe by Reece Chin. Travis’s try was a gem as it went thru several hands to get to him. JD Lealiifano had a strangely quiet day off the tee, only converting one try.

The Boys will need to up their gears come finals time as we went a wee bit quiet in the 2nd half prompting a rare show of emotions from Coach’s Going and Lealiifano.

Looking to keep up the winning momentum against the Eagles next Sat out at Nicholls as well as claim the minor premiership!

The clash with old foes Royals at Phillip District was the chance for the Vikings to get back into the winner’s circle after a run of outs and maintain it’s standing at the top of the ladder.  Vikings were first to score after a scintillating break by Rod Iona and support play by Kieran Reilly which led to a great try to the Kitchie Navuso in the corner, with evergreen Isaac Thompson landing a great conversion to take the score to 7 Nil.  Royals struck back with a converted try of their own in what was turning out to be a tight and bruising contest before a penalty goal saw the Redmen take 10 to 7 lead at half time.   Another penalty goal extended the lead to the Vikings before Kieran Reilly grabbed a smart try after showing great strength and determination to dive over in the corner.  Royals hit back immediately to score from the kick off and added a penalty goal to take the score 18 to 15 to set up a grandstand finish with 5 minutes remaining.  With the last play of the game and with the great work from a scrum pushover the line for Tom Hooper to claim a 5 pointer for the Redmen to run out winners 23 to 15.

That’s a wrap for Round 14. This Saturday, the Premier Men’s teams head across to Nicholls Enclosed to play Gungahlin Eagles, our ViQueens head up the highway to face Goulburn, also in the last regular season game. 3rd & 4th Grade will start their finals campaign this Saturday at ADFA, game times for all grades below; 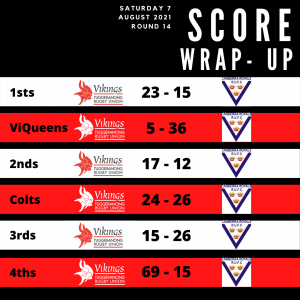