Posted at 15:20h in Uncategorized by Vikings Rugby
Share

With a late forfeit and rescheduling, only our Premier Men’s teams took the field on Saturday to celebrate our annual Hagar’s Day. Both our U18 Boys Gen Red teams also played, both winning their respective matches. Although it wasn’t 1st Grade’s day, Colts and 2’s got important wins with only two games remaining in the regular season.

Thanks again to all the old boys who joined us for Hagar’s Day and the post match festivities!

Two wins, a loss and a draw were the results for our Gen Red teams over the weekend. Find out more about Gen Red Program by clicking here.

The Colties gave Wests a headstart, the opposition scoring in the 3rd minute of the game and then again 15 minutes in. The Vikings bounced back with a good try to Jonty Godfrey and then another to Remsy Lemisio, after a well worked move off the lineout and a great pass from Kai Bower. The Vikings went into the sheds tied at 14 all.

The Red Men knew that their opponents had some big boppers that would run out of puff, and the plan was to do so by playing some expansive footy. Ryan Hoare and Jonty Godfrey, both on limited minutes, stated that they felt great and requested another 10 minutes of play. It was a great decision, with Ryan Hoare making his impact by scoring 3 minutes into the second half. Willy Penitani added to the scoring not long after following a massive drive that resulted in a try. Josh Davis then pounced on a Wests error at their line out, and the Vikings chipped a kick through for Aedan Billiards to recover in the Wests in-goal, a cracking effort by the young Scrumhalf to get to it first and score.Willy Penitani had another great game, with some bouldering runs in attack and strong defense.

The Vikings recognised that they still leak points and will need to work on their defense and communication in the final two games of the season and then into the finals. Vikings 40 – 26 Wests.

The Dirty Twos got their season back on track, defeating Wests at Viking Park 19-7. A major feature of an otherwise dour match was the appearance of everyone’s favourite Bro, Richard Joyes, in his 200th game for the Club in front of, appropriately, a crowd of old boys enjoying Hagar’s Day. Joyesy had a pearler of an outing, culminating in sharing the Player’s Player vote. The other player to share the PP was Joel ‘Baby Face’ Leiper, who stepped up for his first start in the senior Grades. Try scorers were Joel Leiper, Joshua Southwell-Nobbs (of course) and JD Lealiifano. JD and Isaac Thompson shared the goal-kicking. The lads now look forward to next week, when they try to knock off competition front runner Royals. Vikings 19 – Wests 7.

The Vikings returned to Viking Park following a two-week break, to celebrate Hagar’s Day against an in-form Wests team. The match was a bruising and tough encounter, and the Vikings would eventually succumb to a very determined opponent. The first half was very much an arm-wrestle between both sides, with some crunching defense and spirited attack by the Red Men. Nigal Ah Wong was able to crash over for a try 5 minutes before half time to take a slim 5 -0 lead.

The lead was further extended 10 minutes into the second half after Andrew Robinson made an excellent break, and scooted away to score a great try in the corner. Unfortunately, It was Wests who would do all the scoring following this, touching down for two converted tries and a penalty goal to take control of the match 17 -10. The Vikings had one last opportunity in the dying stages to level the scores, but weren’t able to break the Wests line. The loss was further compounded for the Red Men with several injuries to key personnel. The team will no doubt regroup before another fiery match against Royals at Phillip Oval, and look to cement their position on the ladder heading into finals. Vikings 10 – 17 Wests.

That’s a wrap for Round 13. We have a full Club Day out at Phillip Oval this coming weekend against Royals. Stay tuned to our social media and website for more information on game times. 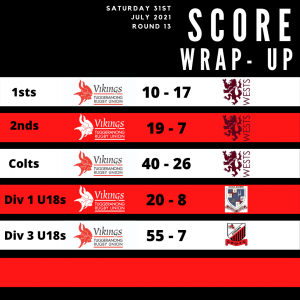