Posted at 16:03h in Uncategorized by Vikings Rugby
Share

All Vikings Grades barring 3rd Grade played some footy on the weekend, the Club going 4 from 5 as we celebrated our Canberra BMW Ladies Day. It was another excellent Saturday weather-wise, the Club welcoming over 150 women to Viking Park. It was a great day overall to be a Viking!

Our Gen Red teams kicked off their season on Saturday as well, with some positive results across the board. You can find out more about our Gen Red program by clicking here.

4th Grade kicked off proceedings at Viking Park and were ready to rumble, having played two friendly matches in the lead up to their Round 1 contest. Captain Siaosi Fakalolo ran out for his 100th game for the Club, an excellent achievement for a loyal Viking. A slow disjointed start saw the Owls take a 12-0 lead after 15 mins of play. Some strategic replacements and a dominate forward pack put the Vikings back in the match, but the Redmen still went into the break trailing 12-5. Inspired by Siaosi’s 100th and a stirring speech by Coach Vejvoda, the Vikings scored 3 tries to take an unassailable lead. The Owls were able to nab a late try for a bonus point, but it wasn’t enough to steal victory from the Vikings. Backrowers Joel Morris, Dan Uilelea and centurion Siaosi Fakalolo dominated the match for the Redmen, putting the boys in the winners column to kick off the year. Vikings 24 – 17 Owls.

During the warm up, it was mentioned by the coaches that the energy of this young Colts side was down, and that they needed to pick up the intensity before a big game against an undefeated Uni-Norths team. Unfortunately, the Colties couldn’t quite get out of their funk, and had a tough day at the office on Saturday.

The Vikings started great, with a well-constructed try to Kai Bower who continued his try scoring streak. The message went out from the coaches box to keep applying pressure, but it seemed that the Vikings expected things to happen, and thought the win would just come. From this point on, the players were out enthused, missed crucial tackles and dropped their standard around the set piece. The Vikings weren’t providing enough support to the breakdown, costing them valuable field position and allowing the Owls to convert pressure into points. The Redmen had some great passages of play that resulted in tries to Jonty Godfrey and Josh Story, but they weren’t able to hold off the onslaught from the Owls. To their credit, the Vikings remained in the game with 15 mins to play, trailing only by one score. However, as was the theme in the match, the Owls capitalised on some Viking mistakes and scored two late tries to seal victory. This Vikings Colts side has so much potential, but will need to head back to the drawing board and apply themselves at training to earn their wins. Vikings 17 – 38 Owls.

The players were the first to admit that they needed to be better, and when asked to give their votes for player’s player they choose not to do so, the points going un-allocated.

Playing on Field 2 so that our ViQueens could get a prime time slot on Field 1 for Ladies Day, the Dirty Twos went about their business and maintained their unbeaten run. With some fresh faces from 3rd Grade bolstering the side, the game started slowly under a hot sun. However, it wasn’t long before the flood gates opened and the Vikings started scoring tries. Prop Liam Bilston notched a double before succumbing to heat stroke, while Nick Wald was business as usual with another try in as many weeks. Two 3rd Grade regulars in Robbie McNeill and Eddie Waqa enjoyed the spoils of the match with a try a piece, and last season’s top try scorer Tupou Lolohea crossed for his own meat pie after an industrious game. JD Lealiifano and Jayden Macken combined to add the extras for the Vikings. A special mention to Tommy Watego, who after being unshackled from the depths of the front row was dynamic across the field – picking up the Player’s Player vote for his efforts. A good day for 2nd Grade. Vikings 36 – 17 Owls.

Our ViQueens were given a prime time slot on Field 1 to celebrate our Canberra BMW Ladies Day. Despite taking victory against the Owls in their last trial match, they knew that they’d have their work cut out for them with points on the line. The game was played mostly in the middle of the field, a tug of war of who would score first and break the other. The Owls were the first to cross the line, converting a try after running around the ViQueens backs. Up front, the forwards were putting on bone crunching shots to the delight of the crowd. Captain Tayla Stanford had another damaging game, continuing her barnstorming running from the backline and then eventually from the front row. Recently returned Michaela Leonard had a great day at the line out for the ViQueens, and was at just about every ruck to support her team mates. Nicole ‘Germ’ Wheatly was a welcome return to the ViQueens line up on-field, although her presence off-field has never faltered. Germ found a new home in the front row, helping the ViQueens to scrum the Owls out of the match. New recruit Makayla Morris was hands down the best player on the field, however, constantly finding and creating holes for the ViQueens to attack through. Mak also scored one of the ViQueens two tries. The ViQueens earned their celebration at Ladies Day following the match, putting on a spectacle and proving that they will be a force in 2021. ViQueens 12 – 7 Owls.

With the Autumn sun continuing to bathe Viking Park and its large Ladies Day crowd, 1st Grade’s clash against the undefeated Uni-North Owls proved to be a test of endurance, after playing a man down following a red card just before half time. The Vikings were the first team to score after a deft Rodney Iona kick for Kieran Reilly was pounced on, Rods adding the extras. The Owls hit back with a try of their own at the 15 minute mark, with the match turning into a real arm wrestle. Captain Andrew Robinson continued his strong start to the year with some great work out wide, along with Max Ravouvou who had some great hits mixed in with his high work rate. After being camped on the Vikings try line for a long period of time, the Owls managed to plunge over for a try, taking a slender 10 – 7 lead heading into the break. The Vikings drew level with a penalty goal early in the second half, with Reece Chin providing some great go forward and Pat Maka making his presence felt across the park. The Owls managed to grab the lead again with a converted try, the clock reading just over 10 minutes to play. After some concerted pressure from the forwards, JD Lealiifano surged over for a converted try to lock up the scores again with just over 5 minutes left to play, setting up a grandstand finish. With no time left on the clock, the gallant Redmen showed patience and maturity to build 20 phases of play to draw a penalty. Iceman Jack Evenden calmly stepped up to slot the winning field goal, securing victory for the Vikings. An awesome way to cap off an excellent day. Vikings 20 – 17 Owls.

And that’s a wrap for Round 3. The Premier Men’s and Women’s head out to Phillip Oval next weekend to take on the old foe Royals, while the First Division boys head to Dowsett Field to play ADFA. Stay tuned to our social media for more information on game times! 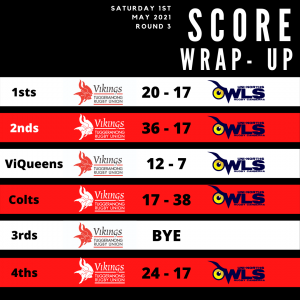