Posted at 16:01h in Uncategorized by Vikings Rugby
Share

This week, we look back to the birth of our Junior Vikings Rugby Club in 1979. Words from Club Founding Father John McGrath…

Promotion in 1976 to Premiership Club status in the ACT brought with it certain responsibilities.  Of prime importance was to develop the code not just at the Senior level in the Tuggeranong Valley; but also and with equal priority schools and junior rugby. Some effort was made in 1977 to field teams in junior age groups.  However, in 1979, Premiership Clubs were required to submit annual reports to the Union on goals set and achieved in order to retain Premiership status.

Vikings analysed various junior development models and satisfied ourselves that Royals by far had the best.  Basically, they had formed autonomous junior clubs clustered around geographically linked suburbs, eg. Magpies Junior Club catered to Garran/Hughes/Swinger Hill.  Each club had their own committee and reported as an affiliate of Royals Juniors and through it the Seniors.  They supported this with the employment of a Development Officer.  It is worth noting that some clubs paid lip service to the development role and as time past they either folded or amalgamated with other clubs.

Vikings Seniors set out to adopt the Royals model and enhance it where it thought necessary.

At this point in the story we have to bring in the Kiwi factor.  With the endeavour of boosting our playing stocks we advertised in New Zealand for players.  A number responded bringing their families with them.  All ended up quite committed to the Vikings Club cause. The likes of Charlie Shore, Barry Murphy and Kenny Leggoe served in one capacity or another with the Club and proved strong advocates for a Junior Club.

The guys were concerned about starting a Junior Club administered by a faltering, in playing terms Senior Club which was in a parlous financial position and had the responsibility of a licensed club hanging around their neck.  Their concern was that the Juniors would be so successful that the Seniors would prioritise their funding using money raised by the Juniors.  They wanted to form the Junior Club using its own constitution.

Charlie and I had many animated discussions about this; but ultimately the Seniors conceded.

A committee was formed to develop an appropriate constitution.  This brought in another character of some note Bill Stephaniak.  Bill was an all round good bloke, a popular player with both Royals and at times Uni; was employed with the Crown Prosecutor’s Office and provided some legal credibility for the Committee.

As it turned out for the purposes of savings significant dollars on having a solicitor develop a constitution they decided on plagiarising the Seniors one amend it as they saw fit and then seek legal opinion on the wording.   Bill chaired the inaugural meeting in February 1980 which saw the constitution adopted and Charlie Shore elected President.  Around the same time the Licensed Club employed Bill Milward as its first Development Officer responsible for schools rugby and asset for the Junior Club ‘to use.

As a postscript to the formation of the Junior Club, I’m pleased to admit we had it wrong.  The Vikings Junior Club has and is one of the most successful Junior Clubs in Canberra, consistently registering the most number of players each year.  The majority of their youth players have transitioned seamlessly into the Senior ranks as talented and well prepared athletes. 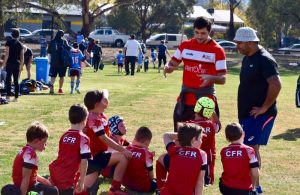