03 Jun Vikings Rugby Round 9 Wrap Up

Posted at 14:54h in Uncategorized by Vikings Rugby
Share

In Round 9 the Vikings Premier Grades and 1st Division sides returned to Viking Park, while the ViQueens travelled to Griffith Oval to take on Easts. The Club hosted it’s annual Sponsor’s Day for all of our valued partners and sponsors, treating them to a great spread of food and several cold beers – a massive thank you to all the sponsors that came out and enjoyed a day at the footy! The Club also celebrated Indigenous Round with a Welcome to Country and traditional smoke ceremony performed pre-1st Grade. A huge thank you to Paul House for conducting the ceremony.

It was a scoreathon in 4th Grade, both Vikings and Wests enjoying a game of running Rugby (we say ‘enjoyed’ conservatively in this Grade – I’m sure at the time it was very much unappreciated). The Vikings drew first blood, but were unable to capitalize on an early lead, allowing Wests to outpace the clock in scoring as they fell behind at the half 28-19. Some good composure by old heads Cameron Shaw, Andrew Dickson and Papa Riley Banks put the Vikings back on track in the second term, as they began to claw back and run in a number of excellent tries.  Papa Banks had a welcome return for 4th Grade at Scrumhalf, directing the forwards well and allowing Chewy and Cameron Shaw to dictate the game out wide. The two tales that continue to be told to this writer, however, come from two instances in the game that involved young Mitch Bowden – the first detailing an ugly fend he received from a Lomu-esque winger and a 50m try he scored in the corner after outpacing a Wests prop – quoted as ‘the definition of running on a treadmill’. A great come back by 4th Grade to snatch the victory. Vikings 50 – 33 Wests.

Another rough game for 3rd Grade, who had a disappointing loss at the hands of Wests. In an uncharacteristically quiet game for the Vikings, Wests were able to get the upper hand in several positions around the park through their big and mobile forward pack. The opportunity to win was there for the Vikings – Tim ‘T-Mac’ Macarthur was everywhere, constantly hitting rucks to secure possession. Bryce Taotua showed off his signature footwork and had some flashes in attack. Matt Wafer ceased his joke-thievery for one round and was solid for the forwards in attack and provided a calming presence. As has been the case for the Thirsty Thirds in 2019, they have struggled to close out their games and will need a massive effort in the final two months of regular season Rugby to reach the finals. But they won’t be jumping the gun just yet – it’s back to the drawing board for 3rd Grade as they have a bye this coming week and will look to reset. Vikings 17 – 38 Wests.

The ViQueens faced the newly formed Easts Women’s team, after a long two weeks off of Rugby. The girls started the match on the back foot after allowing Easts in early, the ViQueens taking their time to get into the match. It was the forward pack who picked up the pace, going hard at Easts defence to take back momentum. Sharon Waihape was excellent, as was the forward that scored the only two ViQueens tries – unfortunately no one was able to recall the try scorers name, only that she reminded everyone at the after-match function that she had played for the Brumbies Super W team. The backline, led by live wire Rhianna Burke, showed some razzle dazzle that would lead to the ViQueens tries and their eventual lead, however, the girls were unable to hold out the game and let Easts back in with only seconds to go. A special mention to several of the new girls at the Club, who’s game play is steadily improving thanks to their efforts at training. Vikings 10 – 12 Easts.

The Colties were back to the dominating Rugby they have grown to be known for, after two rather quiet weeks for the group. The Vikings were hot in attack from the get go, the stacked backline running rings around their opponents from Wests. Tom Brewer had a cracking game at Outside Centre, showing strength and speed to get over the advantage line and then some on several occasion. Jy the Jet Clarke was finally unleashed, the fastest Rugby player in Canberra having a field day out on the Wing. Most impressive was the Vikings defense, which held Wests to only one score. Although a relatively young Colts side, the Vikings are showing a maturity and understanding of the game beyond their years, smashing it up at set-piece time and controlling the flow of the game superbly. Although not all their victories will come so easily, Coach Kydd and Foster have this group set on a great trajectory. They will continually to thrive right through to August. Vikings 45 – 7 Wests.

The Dirty Twos continued to show why they are one of the best teams at the Club, annihilating their opponents with another huge score line. It was easy going for the Vikings, who weren’t phased by several late changes to their side. The majority of the Vikings tries came from big breaks from the electric backline, however, the support play around the ball carrier and at rucks was superb and allowed the Vikings to capitalize on their opportunities. Max Ravouvou and Dean Wilson were at their usual best, leading a backline that combined for 9 tires. Jeremy Mututu had possibly his best game in Vikings colours, touching down for a hat trick of tries on the Wing. The forwards were efficient and damaging, too – Michael Henry had a huge game at Hooker, while Izaak Weston brought his recent 1st Grade experience back with him in a great game from Openside Flanker. The Dirty Twos are in red hot form. Vikings 71 – 5 Wests.

The 1st Grade match was highly anticipated, given that these two sides had drawn 47 all in their previous encounter. Prior to the Bye last weekend, the Vikings had demolished Easts by 60 odd points, so they were looking to take this form into the match. As part of Indigenous Round, a Welcome to Country, traditional smoke ceremony and digeridoo playing was hosted pre-kick-off, thanks to proud Ngambri and Ngunnawal man, Paul House. The Vikings, spurred on by the support of their Sponsor’s, ran in two quick tries at the start of the match to lead 14-0. The Vikings never looked back from this point, keeping momentum and packing on points. The game was characterized by the effort of the forward pack – facing a Wests pack that has intimated the competition in the past, it was the Vikings who flexed their muscles, winning the scrum, line out and ruck in a crucial match up. Angus Allen had a Man of the Match performance, a feat more impressive when you remember that Gus started the year on the sidelines after two ankle surgeries. Colt-aged Cooper Taekata had a great game at Lock, making the most of his opportunities in 1st Grade and really earning his stripes. Ryan Lonergan was again one of the best on ground, adding 24 points to his already hefty season points tally after kicking 7-from-7. But the real hero of the day was Professor Ben Pratt, who after joining the front row from the bench put in a masterful display at Prop to get the wood on a former Super Rugby player. This was a really positive performance from the Vikings, who like the side in 2018, are finding their form at the right time of the competition. Vikings 49 – 21 Wests.

That’s a wrap for Round 9. This weekend the Premier Grades head out to Phillip for our first match up against old foe Royals for the year, while 1st Division and the ViQueens have a bye. Stay tuned for game times later in the week! 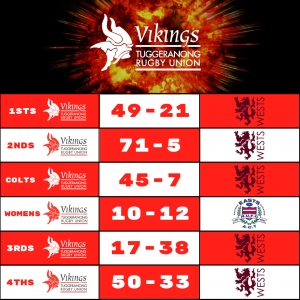