14 May Vikings Rugby Round 6 Wrap Up

Posted at 00:34h in Uncategorized by Vikings Rugby
Share

Not a great weekend for the Vikings, who went 1 from 6 with all Grades split across three locations. Despite the results, there was some good Rugby played – Gungahlin, Hall and Royals proving to be tough opponents.

4th Grade capped the only win of the day for the Vikings, thanks to the inclusion of some old heads who ran amuck. It was a game of two halves for the Vikings, who relished playing downhill with the wind in the first half, opening a large score margin. Andrew ‘Chewy’ Dickson unfairly led the point scoring again, possibly feeling threatened by 2nd Grader Jayden Macken having a solid crack at his record. Omar Ramsden pulled on a Vikings jersey for the first time in a year and had an excellent game in the mid-field, while Robbie McNeill made light work of Hall at the set piece. Hall began to claw their way back into the game in the second half, taking advantage of a tiring Vikings outfit. However, a determined defensive effort saw the Vikings hold out the match with a couple of late tries included – important to note that Grant Lukins was one of those try scorers. Vikings 38 – 17 Hall

Foreword: a massive thank you to all the 4th Grade players that stuck around to play 3rd Grade. 60% of the 3rd Grade side had played a full game of 4th Grade prior to running on to the field, and despite the score line, full credit to the boys who played their hearts out.

Another tough game and tough loss for 3rd Grade, who found themselves depleted of playing resources once again. Despite this, it was a valiant effort from Viking’s rag-tag team – everyone pretty much stuffed by the final siren. Dan Uilelea and Justice Henderson were excellent in their return from injury, the backrow duo combining once more to threaten Hall on both sides of the ball. Andrew Talaina complemented the two from No. 8, leading the chat and keeping everything positive in a tough day at the office. It can be easy to write a team off by looking at the score line, but 3rd grade were all class given the circumstances and showed a lot of heart on Saturday. Vikings 0 – 61 Hall

This was the ViQueens first hit out of the season after having the bye in Round 1, and despite only fielding 13 players the girls put up a strong fight. It was the veteran ‘Queens that took the lead, with a relatively new squad turning up for the 2019 title defence. Remi Wilton took the form that had her selected for the Brumbies Super W side into the weekend, scoring the ViQueens only try and controlling the pack well. She was joined by fellow Brumby Peta Cox and Sharon Waihape, both returning ViQueens who had solid games to give the girls every chance of winning. Bec Giles impressed in her first game for the Club, leading the tackle count and earning Player’s Player. Although they didn’t get the chocolates this weekend, the ViQueens will continue to be bolstered by the likely return of several key players, as well as provide opportunities for the new girls to shine. The ViQueens enjoyed their first run around and will only improve from here. ViQueens 5 – 7 Royals

A slow start from the Vikings cost them on Saturday, but there were still glimpses of the Colts team that was undefeated up until this point. Gungahlin started well, putting the Vikings on the back foot in the first half. The Colties had several issues at the set piece that Gungahlin exploited in what was a very physical game. The Lock pairing of Tom Hooper and Zac Bursey was solid, Zac only fresh from Ireland and Tom only recently returning from injury – watch this space for bigger things from these two boys in 2019. Kieran Reilly was electric on the Wing once more and Hunter Davis had a good game at Inside Centre. The second half was a better effort from the Vikings, who started to find their shape and gain some footing in the match. But it was a little too late for the Vikings, who lamented a quiet first half. Not the best game from this team, but still a strong showing and a game they will learn from. Vikings 10 – 26 Gungahlin

This was a tough contest for 2nd Grade, who faced an Eagles side that had bettered them only just in Round 1. The Dirty Twos did well to build phases and retain possession, however, they were unable to convert on several occasions or gain significant field position. Gungahlin would then counter against the weary Vikings and drive them back into their own territory, scoring on several times. However, the Vikings defence overall was solid, particularly given the size of the Gungahlin forward pack. Turi Hides relished his promotion from Colts to 2nd Grade, having an outstanding game on the Wing that earned him Man of the Match honours. Michael Henry steered the side well from Hooker, while Trai Henderson continued his impressive run at Inside Centre with another barnstorming performance. The score line of this game reflected the effort in defence by both sides. Unfortunately, the score wouldn’t favour the Vikings, who still put in a valiant effort. Vikings 11 – 19 Gungahlin

Following on from 2nd Grade, 1st Grade too had a tough, tight contest against a big Gungahlin pack. The defence in the first half was outstanding by the Vikings, who kept the Eagles at bay and through the boot of Isaac Thompson, sent them back into their own half several times successfully. The Vikings set piece struggled in the first half, giving Gungahlin an advantage on both feeds. However, despite the issues at scrum time, Sione Taula had a mammoth game, putting in work and easily topping the list for carries. So much for retirement. As has been their issue in the past 2 rounds, handling errors plagued the Vikings, which allowed Gungahlin to score consecutive tries in the second half and put the Vikings well behind on the scoreboard. But 1st Grade wouldn’t die wondering, putting in a final stanza to steal victory. Ben Pratt’s addition at Prop proved valuable as the set piece woes were flipped, allowing the backline to play off a platform and make some inroads. Joe Langtry was great on both sides of the ball, having some probing runs in attack and proving rock solid in defence. The ‘never say never’ attitude of this Vikings side showed again on Saturday, as they closed the gap to bring the score to 26-25. With the ball in possession after the final siren, a slight mishap at the lineout saw another handling error cost the Vikings, with the game between these two teams once again finishing tight. Vikings 25 – 26 Eagles.

A special thank you to Liam Warcaba who was present on Saturday to award the Roman Warcaba Cup, a trophy contested for annually between Vikings and Gungahlin 1st Grade in memory of a great mate. Congratulations to Gungahlin on claiming the Cup in 2019.

And that’s a wrap for Round 6. Next week, both Premier Grades and 1st Division will return to Viking Park to play Easts, while the ViQueens will be taking on Wests. Stay tuned to our website for more information on game times! 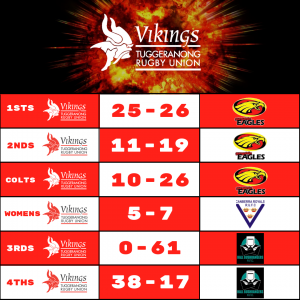