10 Jul Vikings Rugby Round 14 Wrap Up

Posted at 13:57h in Uncategorized by Vikings Rugby
Share

There were important match ups for all Grades over the past weekend, as the race to the finals heats up. The Premier Grades and 1st Division sides took on Royals out at Phillip Oval and keeping with tradition, the rivalry between the two sides made for some entertaining Rugby. The ViQueens travelled to ANU North Oval to face the Uni-North Owls in a top of the table clash. Just like the weather forecast on Saturday, the Vikings had a mixed bag of results, bagging crucial wins in 1st Division and the Women’s division but suffering tough losses in Premier 1st & 2nd Grade.

In their first encounter all the way back in Round 1, Royals got the better of the Vikings in 4th Grade. Having not dropped a game since Round 2, the Vikings were looking for redemption, with the added bonus of a win keeping them in firm sight of a Major Semi-Final appearance. The Vikings were slow to start, letting in an early try after some passive defence. They were able to quickly take hold of the momentum from this point on, though, thanks to the formidable front row of Nick Cushan, Colin Montgomery and living legend Geoff Adam providing some real go-forward at scrum time. Beau Mokotupu controlled the game superbly, even having several nice touches himself. Manteena Player of the Year Grant Lukins bagged himself a hattrick, placing him 2nd behind Tayla Stanford for most tries by a forward in 2018. It was a great game to watch from 4th Grade, who played smart, simple footy to put their opponents away, 32-17.

Similar to 4th Grade, the Thirsty Thirds had a narrow loss in their previous encounter with Royals. This match had a lot of weight in it, too, given the fact both teams were separated only by 1 point on the ladder. The Vikings were bolstered by several players returning from injury and Premier Grade duties, making an impact on the match early. Featuring a formidable forward pack, 3rd Grade steamed up field with some well structured footy, the backs using the platform set by the forwards superbly. Matt Wafer featured in his second lengthy line break this year, having a destructive game at prop. His front row partner Tom Carney was solid around the park, too, and for the first time in his Rugby career gave away less than 3 penalties in a match. Although they conceded two late tries to cap off the match, the damage was already dealt by the Vikings, giving them a convincing victory, 31-19.

The ViQueens squared off against the Uni-North Owls in a top of the table clash. The previous encounter between these two teams had resulted in a nail biting 5-0 victory to the ViQueens and this match was shaping to be incredibly similar. The consistency of the ViQueens preparation has really shown – the team still looking sharp after a great season that has seen them undefeated. The ViQueens took first points within 10 minutes of kick off, the impressive Tayla Stanford bulldozing her way over the line after some quick ruck ball. Tayla had an outstanding game – she would later set up the second try after a line break from half way to put Kahlee Adams over the line. Tayla then dotted down for the third try after some great phase play from the ViQueens, extending her lead as the club’s highest try scorer. The Owls wouldn’t die wondering, however, staging a come back in the second half to close the gap 15-10. After a tense few minutes following the final siren, the ViQueens defence held the Owls at bay to cap off the victory, 15-10.

The Colties continue to play some great Rugby, taking another impressive win on Saturday against Royals. Featuring another strong squad from 1-15, the Colts quick ruck ball allowed the backline to really open up and play some expansive footy. Nic Marshall was best on ground for the Colts, as he continues to impress in the no. 13 jersey since shifting from the wing. It was also an eye catching performance from Lachlan Lonergan, who started in his first game for the Club since returning from injury – keep an eye on this kid! The Vikings were first on the board after a well placed box kick from Seamus Smith to Jy Clarke for a try. Royals hit back quickly with a try of their own, but the Vikings forward pack continues to prove too much for their opponents, as they scored a brilliant try off the back of a line out. From this point the Vikings continued to mince their opponents, amassing an unattainable score and strengthening their finals chances. The Colts’ team cohesion has been the highlight of the squad this year and is really showing in their game play, with an even split of forwards and backs tries on Saturday. The forwards played with a lot of confidence while the backs showed their maturity with some great direction and control. Watch out for this team come finals. Vikings 40 – 13 Royals.

An opportunity missed for 2nd Grade, who have now suffered two defeats in a row. The recipe for a victory was there for the Dirty Two’s, who featured a big forward pack and a dominate backline. The Vikings allowed Royals in early, conceding a try off the back of a scrum which Royals built their momentum from for the entirety of the match.  When playing simple, direct footy, 2nd Grade looked threatening – player’s like Pou Ahomee, Trai Henderson and Jayme Field provided opportunities off the back of their go forward ball, but the moments were lost from offloads that went to ground, loose carries up front and slow support to the break down. It’s not panic stations by any means for 2nd Grade, who have the tools to succeed – in this writer’s opinion, all they need is a little cohesion, motivation to play and a desire to chip in for the 1%ers. The Vikings will look to improve on this result, eventually falling to Royals 26-5.

An exciting match awaited in 1st Grade, in this top of the table clash for Vikings and Royals. Vikings were contesting for the Bob Hitchcock Shield and a vital win that would extend their lead at the top of the table. Luke Gersekowski was a late call up for his starting 1st Grade debut, after Angus Allen suffered an injury in the warm up. Lukey G had a monster of a game, earning Player’s Player for his efforts. Royals were first on the board, building phases in the Vikings half before a line break saw the home side dot down under the sticks. The Vikings would continue to mount pressure, defending superbly before taking the ball down field and earning a penalty, Brendon Taueki slotting the kick from in front with ease. The Vikings would strike again just before half-time, the backline making great use of the forwards drive and set piece to take the lead 10-7. Tensions were high in the spirited affair, several Vikings players locking horns with their Royals counterparts to add some spice to the match. Brendon Taueki scored his second just 5 minutes into the second half, giving the Vikings a 15-7 lead. But Royals would hit back with two quick tries of their own, taking the lead 19-15 after maintaining the Vikings attack and building pressure from their own attack. They Vikings came agonizingly close, but would fall to Royals, 19-15. The Vikings remain a top the ladder and must continue to win games to keep their distance on Royals and claim the minor premiership.

And that’s a wrap for Round 14. We play our final home game this weekend against Wests on the 14th of July – stay tuned to our social media for game times! 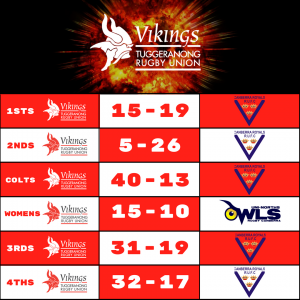