This week is a very special game for the Vikings as all grades are playing against the Gungahlin Eagles at home. But 1st grade will be playing for the Roman Wacarba Cup.

Roman “Wacca” Warcaba joined Vikings Rugby in the very early 90s as a front row forward. Already an established prop, Wacca was a long serving member of the Royal Australian Navy and reached the rank of Warrant Officer. Wacca was a long time servant of Navy Rugby and the Australian Services Rugby Team and toured to many varied and exotic locations in his Navy career. There was a rugby story for every occasion…not only about the game in some far off location but also a colourful account of the social events that followed.

He provided a hard edge to scrummaging across the lower grades and provided great experience and composure during many finals series. He was unforgiving and always played the game in the spirit intended. He was also a strong advocate of developing young props as they came into the Club to ensure that they were not only able to hold their own but to also dominate their opposite number at scrum time and around the paddock.

Wacca moved into coaching at the end of his playing days predominantly as an Assistant Coach. Any Head Coach could be assured that the forward pack was well drilled and mentally tough. He was very popular amongst those with single digits on their backs due to his uncompromising attitude to working hard on the training field and then celebrating successes appropriately as a result. In 2006 whilst coaching Reserve Grade, Wacca came down with what was originally diagnosed as the flu. It would not leave him and further tests identified that he had developed leukaemia. It was leukaemia that would eventually claim his life on 16 June, 2007, a day Vikings hosted Wests at Viking Park. His funeral was held at St Christopher’s in Manuka. The Cathedral was full to capacity with serving and retired military personnel as well as a plethora of those rugby people who knew or knew of Roman. A fitting tribute to a man held in such obvious high regard.

Vikings and Gungahlin have a long history of close and hard fought games. Members of both Clubs saw this as an opportunity to celebrate the spirit of Roman’s love of rugby by playing for the Roman Warcaba Cup. This is the 9th anniversary of the Cup and each year, Liam Warcaba has been on hand to play a special part in the day, and today he once again joins the Club to present the Cup to the winning Captain 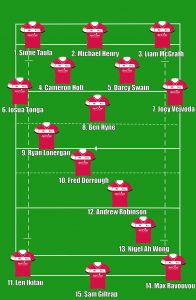