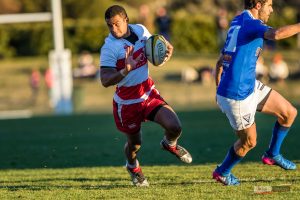 4th Grade kicked off Hagar’s day with a star studded line-up taking the field against traditional rivals Royals. Whilst the most notable inclusion has been covered in depth by the mainstream media, I think it’s fair to say that there were plenty of people heartened to see Christian running around again. Robbie Vejvoda is certainly licking his lips about getting his hands on him for 3rd grade’s push to the finals. In terms of the 4th grade game itself, the tone was set from the first try when the ball went through 2 sets of Lealifano hands before reaching Dickson’s, at which point it was tucked snugly under the arm of the 200 gamer and deposited over the try line with a number of Royals defenders reduced to spectating duties along the way. The final score of 88-0 reflected the side’s dominance, although the presence of some illustrious ring-ins did assist in blowing it out.

3rd grade hung on 21-14 in another hard-fought contest, with Jack Howard’s kicking from the tee ultimately proving the difference. Riley Banks had another busy day sniping from halfback, adding a try to his tally for the season, while Mitch Lonergan emptied his tank again. Whilst the side will be frustrated by its inability to hang onto the ball and penchant for getting on the wrong side of the referee, they will be pleased to have been on the right side of the score sheet and will be looking forward to this week’s clash with Goulburn.

Thanks to Trendy for the following: With some players missing due to niggles or higher grade commitments the Colts called on their extended squad and the 68-7 result highlights again the depth and quality of the 2017 crop. Vikings had a dominant scrum taking numerous tight heads and this set them up for a glut of possession, which was well used by fly-half Jayden Macken and centres Marshall and Tivalu. Despite some ambitious passing that turned the ball over too many times the colts were able to turn pressure into points with strong displays up front by Luke Corcoran, Kahlil Wilson and Isiah Tikitau and some great finishing by Riley Turner and Reuben Keane. Jack Evenden had one of his best games sharing his time between #9 and #10 and the bench came on and did their finishing job with the final score blowing out. The Colts coaches acknowledged the try scoring power and depth of the squad but realise there is still much work to do with finals only 1 month away.

Thanks to Stef for this Viqueens wrap: As per all grades, the Viqueens were up for a big match against Royals. With a few Women away they knew it was going to be hard. The game was as usual controlled by the forwards. With big hits came big tries. Royals were able to score a few points on the Viqueens through their back line but we were able to hit back with our dominant forwards to crash over the line. The game was try for try for a period but our Women were able to bring it home in the last half to put a comfortable score between the sides to hold onto their undefeated season. Final Score 29-17.

Second Grade were unfortunately not able to build on the victories of the lower grades, with a disappointing 25-17 loss giving them plenty to think about heading into an important match with Uni. With the pack outshone despite busy efforts from Callum Smith and Josh Hitchins, the backs had limited space, with Len Ikitau and Joe Langtry making the most of any ball they did receive. The side will also be keen to tighten up their discipline against a Uni side who will be happy to see this week’s clash degenerate into a shootout.

First Grade will be pretty disappointed with their showing, with the side squandering a 10-0 lead to let Royals back into the contest and ultimately being forced to chase a significant deficit by the end of the game. The bright start was once again lead by Jake Knight, who did well to recover from being decapitated to cross for the first 2 tries off a couple of well worked set piece plays. From this point on though the side succumbed to ill-discipline, with Royals kicking 3 penalties to stay in the game while Vikings lost Darcy Swain to the bin for repeated infringements. Whilst Royals 2 tries came from an intercept and another turnover, their defence was very solid in sustaining multiple phases of Viking attack and will be challenging for anyone to break down. A late pushover try was a credit to the effort of the Viking pack (with Sione Taula in particular putting in a tireless showing) and left the final score a fair reflection of the contest at 24-17.

Big thanks must go to Liam McGrath and Brendan Allardyce for organising the afternoon and evening’s old boys festivities, with special mention to Geoff Adam for his hosting work in the tent on Saturday afternoon. The club looks forward to this weekend’s fixtures, with 3s and 4s having their much anticipated bus trip to Goulburn, 1s 2s colts and Viqueens facing Uni away.