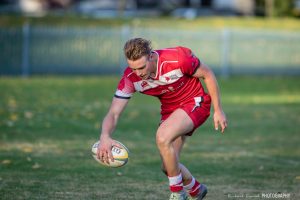 4th Grade started the day with big numbers looking to get some game time against the Hall Bushrangers. With a couple of key starters heroically fronting up on the back of questionable preparations the side was a little slow out of the blocks, with the Bushrangers very energetic in contrast. Once the cobwebs were blown out the class of the Vikings side started to shine through, with a returning Cameron Shaw proving devastating from fullback and Tim (name suppressed until he coughs up 8 years of registration fees) also enterprising if not always accurate in the centres. As the starting side began to tire (with Will Crossing in particular fading as his hangover kicked in) bench players such as Steve Niovanni and Murphy ‘Steel Fists’ Maefu took over, each crossing to seal the game 45-5. Special mention to colts players Kieran Place, Neil Mathieson and Sgt. Shultz who assisted Hall out with numbers and performed strongly against their club mates at the back end of the game.

Thirds secured an impressive 27-23 win against a strong Bushrangers outfit, with the result very much in the balance until the conclusion of the game. Riley Banks was outstanding at halfback, with his sniping runs resulting in a number of breaks and almost excusing his absence from after match proceedings. Daniel Blackmore and Bryce Tauloa also turned in busy displays, while Ben Maleganeas provided a lesson to all goal kickers with his traditional front on approach bringing a tear to the eye of the many purists in attendance. First choice kicker Will Callen, otherwise solid across the board, should be looking over his shoulder.

Colts put on their most complete display of the season in accounting for a competitive and physical Easts side 55-0. Whilst Reuban Keane picked up the players player recognition it was difficult to pick a true standout, with usual suspects like Gersekowski, Watego and Riley Turner also prominent. Coach Allardyce, missing his assistants Peterson (work) and Mokotupu (being Mokotupu) on the day, cited the effort of his pack in delivering quality set-piece ball as a key factor in determining the final result.

2nds continued the red momentum with a 76-7 victory over a feisty opponent in a match that featured a number of flash points and one old fashioned all*-in. Khalil Wilson, making his senior debut at hooker, was unquestionably the standout for the side with his accurate throwing and impressive physicality demonstrating that he was more than up to the task. Try scoring machine JP Mynehardt and Mr Fix-It Travis Pula were also solid for the side, and Trai Henderson giving his direct opponent nightmares with his footwork.

Firsts capped the day with a 79-0 victory that will have pleased everyone, especially defensive coach McNicol. Whilst the score would suggest otherwise the side was made to earn every point by a physical Easts outfit, with Ernest Suavai in particular sure to have woken up sore on Sunday after wearing a series of decent shots. Jordan Jackson-Hope (lucky to get promoted from a pretty average last showing in 3rd grade) had a day out at inside centre, profiting from the solid platform laid by his pack and the shrewd option taking of fly-half Freddy Dorrough. Unfortunately Dorrough ended the game on Jupiter after getting his head on the wrong side of a tackle, with the side facing a reshuffle against a Whites side seeking revenge on their old boys day for the one-sided result earlier in the season. Special mention to the ageless Brett Naylor who demonstrated that he’s still got it, making his first appearance for first grade in 10 seasons off the bench. Not a bad effort considering he was nursing some pretty sore knuckles and a deflated ego after his yellow card in second grade.