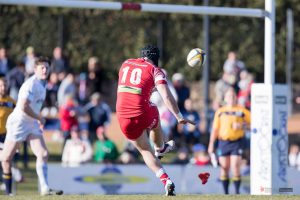 Vikings headed to Nicholls keen to build on a mixed day out against Queanbeyan the week before and make the most of a rare sunny day in Gungahlin. Unfortunately, I’d forgotten how far away Nicholls is and arrived at fourth grade with about 20 minutes to go in the game, by which time the red men were in the ascendancy. Whilst the game was pretty scrappy by the time I arrived Grant Lukins assured me that he scored a scintillating try as Vikings ran out 33-20 winners. Other highlights included a return of prodigal son Daniel Solofa (who marked the occasion with a yellow card) and Jack Howard making a tackle.

Third grade was the reverse of the fourth grade game, with Vikings going down 27-21 in a scrappy contest. Tries to Talaina, Carlos Amar and Washington Underwood and a perfect day off the tee for Nathan King were unfortunately not enough to overcome an experienced Gungahlin lineup.

Colts went down 12-10 in a game where the score belied its entertainment factor. Coaches Allardyce and Mokotupu will be very pleased with the enterprise of their side, who made numerous breaks and showed plenty of skill throughout. Unfortunately, they were hamstrung by their inability to finish and the excellent scrambling defence of the Eagles who hung on for a deserved 2 point victory. Backflip merchant Liam Bevan added ‘long-range intercept try’ to his box of tricks to give the side a late shot at a share of the points which was denied by a well struck but unsuccessful conversion.

Seconds were starting to become a bit of a concern for the club on the back of two pretty ordinary displays, with coach Grimmond’s impeccable hair in considerable danger of being torn out. An away game to an unbeaten Gungahlin was probably not an ideal place to expect to start the turnaround, but the side stood up and put in a display much more in keeping with the talent they have from 1-15, winning 29-24. A dominant scrum and a committed defensive showing laid the groundwork for what was ultimately a great team victory, with memorable try-saving efforts from the back three crucial in the final washup.

Firsts came into the game wary of an opponent that had gotten the better of them the last time they’d met and eager to maintain the form they’d displayed the week before against the Whites. Gungahlin, however, were first on the board, pouncing on an intercept after the early stages of the game had descended into an arm wrestle. The side worked their way into the contest well and had opened up a 19-7 lead at half time off the back of consistent pressure and clinical finishing. Isaac Thompson, himself excellent in a farewell appearance, orchestrated a pleasing team showing which ended in a 38-7 victory. We wish Isaac all the best, and look forward to seeing him as soon as he realises his manager was lying when he told him the AUD:Yen exchange rate is 1:1.

Premier grade and Vi-Queens are at Griffith this weekend, while 1st division teams are out at RMC. 4s, 2s and 1s will be looking to maintain the momentum and colts and 3s looking to pick some up.