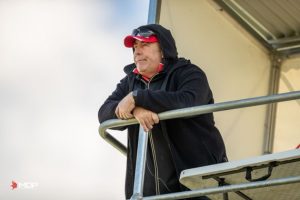 Games Played for the Vikings: I played 92 games for Tuggeranong – all in the lower grades (but proudly played in 3 x lower grade premierships, 92>94>95). I was agonisingly 8 short of 100 games due to a couple of serious injuries at the end of my career.

Started with the club in 1988, 30 years ago (but have had a couple of short breaks so I’ve been actively involved roughly 24 years).

I joined the committee most recently to bring peace to the galaxy and unite the clans.

I love the club for the comradery, mateship, sense of family, atmosphere and the high standards that drive individual and team improvement (and tours). When I started, we were rugby minnows and ran chook raffles, so the journey from easy beats to juggernauts has been fascinating. My daughters, partners, best mates, brother, nephews etc. have all had some involvement in the club over the years.

Obviously, having on-field success with great teams has been a massive highlight throughout and I have been blessed to play or coach in over 15 Grand Finals and some of the fondest winning ones include:

You’ve been a coach at the Club for a long time – who is the best player you’ve coached and why?

Very hard to single out best players ever coached but; Manny Edmonds, Christian Lealiifano, Beau Mokotupu, Tim Curran and Jake Knight in the backs and Huia Edmonds, Graeme McIntosh, Julian Salvi and Brett Naylor in the forwards were all standouts.