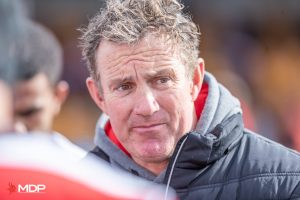 Games Played for the Vikings: 105

I’ve been involved with the Committee now for 3 years.

I enjoy the involvement in this great Club.

Good people, the best facilities, winning attitude. I have played at a number of Clubs over the years but Vikings has always been home.

Playing in the Club’s very first 1st Grade Premiership in 1994.

You’re heavily involved in the 7s program in the ACT and you yourself were an Australian 7s representative. What have you enjoyed being involved with more, the 7s or the traditional 15s?

During the winter season 15s is always the preferred sport. 7s came about initially as a pre-season competition which players used to get fit for winter. This has evolved massively in the last 10-15 years into a huge spectator sport due to the short game time. Outside 15s, 7s is a fun but tough sport usually with a lot of interstate travel.