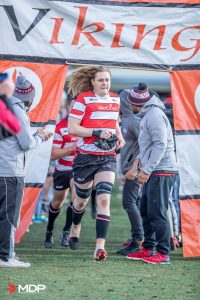 Games Played for the Vikings: 94

I’ve been at the Club for 6 years and have been on the Committee for a year.

Being Club Captain was actually thrust upon me after Josh Hitchins defected to Rugby League. Michael ‘Chic’ Henry wasn’t too keen to pick up the pieces after Hitcho’s tenure so he more or less forced me into it.

I love this Club for its mateship, culture, Grand Final weekends and it’s continual encouragement and support for you to improve as a player and a person.

I have a few favourite memories as a Viking.

So what’s the story with your long hair? What are you trying to hide?

My hair generally distracts people from my huge head.