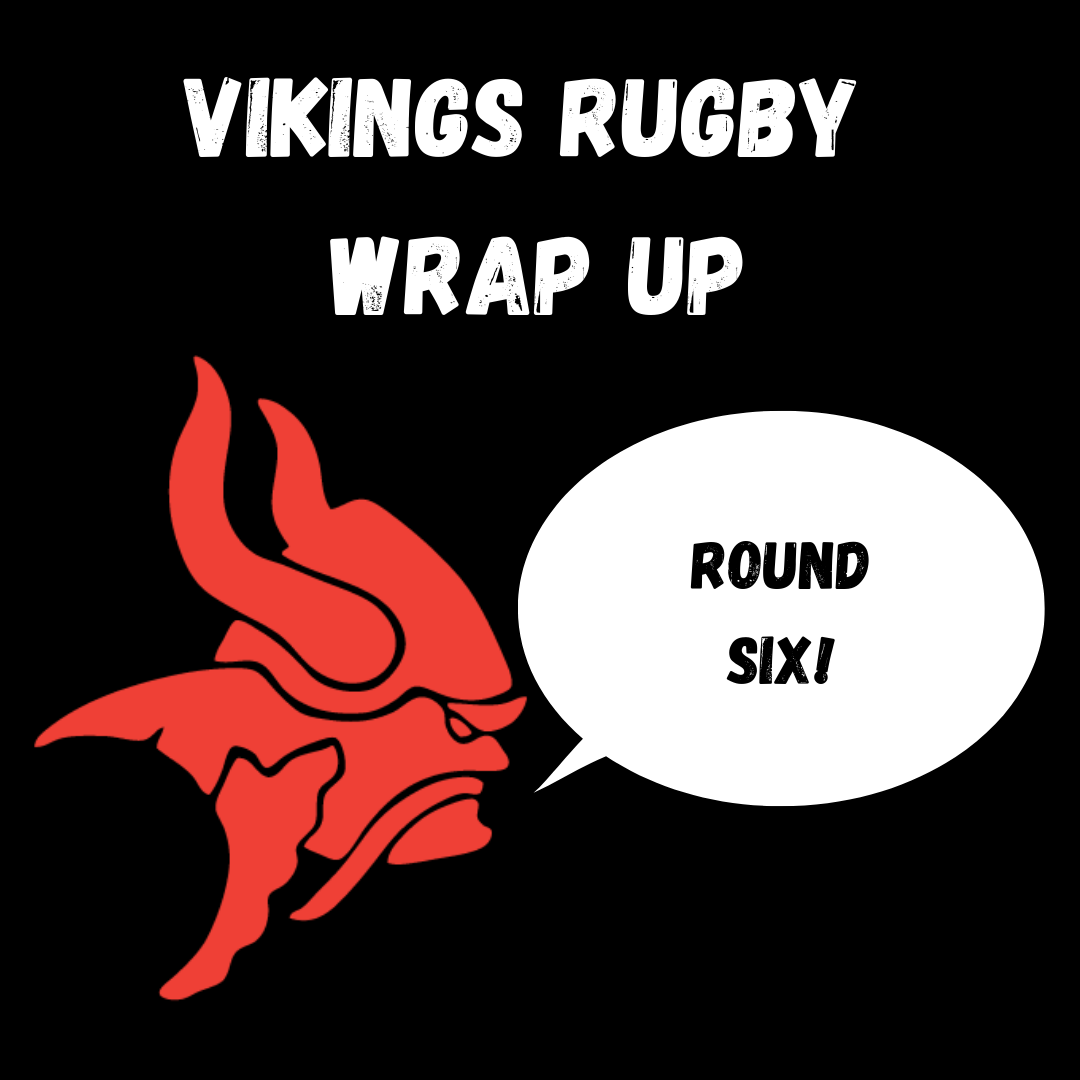 Posted at 14:46h in Uncategorized by Vikings Rugby
Share

The Vikings were back at home on Saturday, every Grade taking on the Queanbeyan Whites. The Club celebrated it’s annual Sponsor’s Day, which was another great day. Thanks to all the Sponsors who joined us, and to all those who continue to support our Club, you are the lifeblood of Vikings Rugby. The Club also hosted a traditional Indigenous Smoke Ceremony, in recognition of Reconciliation Week. Thank you to local Ngambri man, Paul House, who conducted the ceremony. The Vikings were 3 from 6 on the day – take a look at the match report for each Grade below.

A good weekend overall for our Gen Red teams, who won 3 of 5 games. Find out more about our Gen Red Program.

Lets talk discipline. For the second week in a row, the Vikings 4th Grade side finished the game with 13 players on the field, in a close encounter with a tough Queanbeyan side. A converted try was all that separated the two teams. Club cult hero Kaleb Dalla Costa motivated the side after earning a starting spot, while Gen Red graduate Kaydan Morrison put on some bone rattling defence to keep the Whites team at bay. Flanker Dan Uilelea had his second brace of tries in two weeks, while Amani Lalofau was accurate with the boot. Carlos Marr had another astute game from Flyhalf, the talented back steering the ship for 4th Grade. Despite their discipline, this was a good result for 4’s, who played out a gutsy game to remain undefeated in 2021. Vikings 33 – 26 Whites.

The Thirsty Thirds were decimated by injuries and illnesses on Saturday, but that didn’t stop them from putting in a valiant effort against a full strength Queanbeyan side. The Whites opened the scoring with a try out wide. They then scored several more off the back of some costly mistakes from the Vikings. The Red Men hit back soon after with a great try to Jack Mann, after some solid backline running and quick ruck ball. Though the Vikings fought hard to remain in the match, a few late tries to the Whites saw the Vikings go into the halftime break trailing 33-5. In the second half the Vikings came out with renewed vigour, and were starting to gain some good momentum. However, a missed pass bounced badly and Queanbeyan were able to convert this into a try. The Red Men were able to pull things together and regain some momentum, however one of the Queanbeyan players was injured badly, and the remainder of the match was called off. Billy Phimphravichith was a welcome return to the Vikings, playing a solid game from Flyhalf, while the front row of TJ Ikitau, Steve Solofa (who refereeing half a game of 4th Grade before taking the field) and Robbie McNeill were tough up front. 3rd Grade will now regroup before they take on Wests. Vikings 5 – 40 Whites.

In a similar fashion to the previous week’s game against Gungahlin, the Colts were again let down with lacklustre efforts and poor execution. There are so many good players in this Colts outfit, but they need to learn to play as a champion team before they see more positive results come their way. During their Colts camp at Jindabyne at the start of the year, the group spoke about believing in each other and playing for the team, but it seems that they are playing as individuals and not for the same common goal. With some hard work at training, they will see some better results in the coming weeks.

The backs showed glimpses of some great backline movements, only to have the play breakdown with the last pass. There was many times that quick hands with a simple draw and pass would have beaten the opposition, but a cut out ball was thrown to an unsuspecting receiver and the play again became stifled. Jonty Godfrey showed his signature lightening pace with a try in the first half. Willy Penitani pulled off some big jarring tackles and led with a lot of aggression, as we have come to expect from him. Big Kalvin Hemara pushed all game and was rewarded with a try after a series of phases close to the line, his first for the Club. Once this Colts team begins to click and they play to their potential, their season will become much more enjoyable. Vikings 14 – 29 Whites.

The Dirty Twos enjoyed another cracking Saturday afternoon back at Viking Park, wining their 5th game of the season against a valiant Queanbeyan side. After blowing out to a comfortable score, the Vikings switched off and let the Whites claw back to within 2-points at game’s end. It helped that Queanbeyan missed a crucial penalty goal which would have seen them steal victory. Try scorers were Tom Carney, Captain Reece Chin with another trademark show-and-go snipe, debutant Stephen Sanday and Mr Reliable Tupou Lolohea. JD Lealiifano kicked the conversions. Nick Wald failed to cross the chalk for the first time in as many weeks, and perhaps will be punished by being relegated to Lock. A special mention to Ethan Makaua-Farani, who stepped up from Colts to play in the centres. A close although rewarding win for 2nd Grade. Vikings 24 – 22 Whites.

In a game defined by team spirit, the ViQueens rallied in some difficult circumstances to hold a vastly improved Queanbeyan side to a draw. The ViQueens started and finished the game with 14 players, several of the girls battling through injury to stay on the field and support their team mates. Tries to Lily Hawthorn, Nirada Phonsaya and a conversion to Milika Tuinakauvadra put the ViQueens on the board, the girls digging deep in the second half to keep the Whites at bay. Rita Palm was huge in attack, taking just about every second carry and giving the ViQueens some good go forward ball. Backrowers Lauren Freeman and Sharon Waihape combined for a clinical game, both players keeping the Whites honest at the ruck. Given the circumstances, the ViQueens were happy to come away with a draw. They should be extremely proud of their effort over the past few weeks in difficult circumstances. The girls now have two straight byes to recuperate, as they look to continue playing some solid footy for the remainder of the season. ViQueens 12 – 12 Whites.

With the afternoon bringing a brisk chill to Viking Park, 1st Grade were ready to defend the Bob Hitchcock Shield against the Queanbeyan Whites in front of all their sponsors for Sponsor’s Day. The match was preceded by a traditional Indigenous Smoke Ceremony, conducted by local Ngambri man Paul House, in recognition of Reconciliation Week. We would like to thank Paul for joining us at Viking Park on Saturday.

The Red Men got off to a great start, after a good build up saw club stalwart Sione Taula power over untouched after 4 minutes of play. The Whites soon struck back to tie the scores at 5 all, before some great interplay across the park put run-on debutant Josh Southwell-Nobbs over in the corner. Rod Iona extended the lead with a penalty goal shortly after, the scoreboard starting to tick over in the Vikings favour. After some concerted attack from the Red Men, Pat Maka was able to crash over for another try after a well worked line out play. The Whites grabbed a converted try to take the boys into the sheds with a 20 to 12 lead.

Five minutes into the second half, another controlled rolling maul close to the line put Hooker James Douglas over for his first of two tries, the Vikings skipping out to a handy 27 to 12 lead. Cameron Holt was putting on some crunching hits in the middle of the park, the big Lock making his presence felt. Following some great work by Andrew Robinson to break the defence, skipper Seamus Smith was able to toe a loose ball and win the race to score a try close to the posts and extend the lead. The Whites crossed for a converted try with 20 minutes remaining, before James Douglas grabbed try number two from another rolling maul. Kieran Reilly sealed the deal by grabbing a loose pass and outpacing the Whites over 50 metres to score an excellent try.

The Bob Hitchcock Shield stays at Viking Park, and 1st Grade nab some good momentum heading into a redemption match at Jamison Oval against Wests on Saturday. Vikings 48 – 26 Whites.

That’s a wrap for Round 6. The Vikings now prepare for the Wests Lions out at Jamison Oval, a team that has bested 1st Grade the past 3 years at their home ground. Stay tuned to our social media for game times! 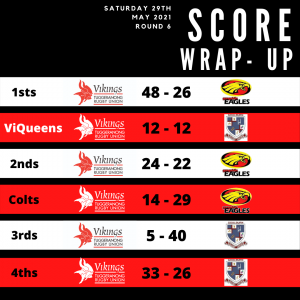