Posted at 10:24h in Uncategorized by Vikings Rugby
Share

The Vikings played across two locations on Saturday, the Premier Men’s facing the Gungahlin Eagles at Nicholls Oval, while our Premier Women’s and First Division boys went up the Hume to play the Goulburn Dirty Reds. The Club went 3 from 6 on the day, notching some key victories. Take a look at the match report for each Grade below.

Our Gen Red teams had a terrific weekend, winning 4 games and drawing 1. Find out more about our Gen Red program.

A beautiful warm day greeted the tight and bright 4th Grade boys at Simon Poidevin Oval, Goulburn. We would like to acknowledge the game day referee, who turned up to do the U18s Vikings v Goulburn 1st XV game, but ended up doing all 4 games in Goulburn due to no shows.

George Uilelea was first on the board for the Vikings with a try, but this was quickly followed by the Dirty Reds notching one of their own. Dan Uilelea & Winiata Tioene scored the next two tries for the Vikings, putting a strangle hold on the game as the Red Men went into the break up 17-5. The second half however was a dour affair, as the Vikings went into defensive mode down a man. A second try to Dan Uilelea (playing out of position at Fullback) sealed victory though. A solid effort, though plenty to work on as the Vikings were their own worst enemy. Vikings 22 – 12 Goulburn.

The Thirsty Thirds were prepped and ready to take on the Division leaders at their home ground, with a good bus trip up and some positive energy providing a good feeling amongst the boys.

The Vikings kicked off and put pressure on Goulburn straight away with some great defence. The Dirty Reds had to kick their way out of trouble, but a bad bounce nearly cost an early try against the Red Men had it not been for some good scramble defence and a Goulburn knock on. After winning the initial scrum battle and some good phase play, Vikings No. 8 Vince Pappas succumbed to a knee injury and was out for the game, forcing Winnie Tioene to play two full games for the Vikings. At times the Vikings had the wood on their counterparts, but were let down by simple errors which were compounded by missed defensive reads. This resulted in Goulburn scoring three unanswered tries to take a commanding first half lead. The Vikings kept pushing, dominating the final 10 minutes of the first half. Spurred on from a great run by Winnie Tioene, the Red Men were able to roll over for a try to Rob Amosa heading into the halftime break. The Vikings had their tails up, and were keen to return to action in the second term. The first 20 minutes were tough, a close arm wrestle between both teams. The Vikings had the Dirty Reds under all sorts of pressure, and it wasn’t until a host of injuries that left the Vikings playing with 14 men did Goulburn take the edge and run in a flurry of late tries. Although they came home with a wet sail, the Vikings can be proud of their effort. Vikings 7 – 54 Goulburn.

The ViQueens had a tough day at the office, only fielding 14 players for the entire match. They showed a lot of heart to keep the game within one score, and played to the best of their ability despite the odds. Stef Stewart-Jones picked up the Coaches 3 points, proving that strong leadership was key in the match, and Molly Carr continues to impress after collecting the Coaches 1 point and Player’s Player. New ViQueen Roxy Horne made her presence felt, with a great game at Scrumhalf. The ViQueens now shift their focus to this coming Saturday, when they will play Queanbeyan at home. ViQueens 7 – 14 Goulburn.

The Colties were let down with poor execution in the set piece, and unforced errors across the park. The Vikings went in with a game plan to quicken the tempo and play a more expansive game, to run the big Gungahlin pack around. Unfortunately, this did not happen and a lack of match awareness proved costly. There were some good individual defensive efforts from the likes of Willy Penitani and Jonty Godfrey, but the Vikings will need to lift their intensity and urgency if they are to beat other teams in a close Colts competition.

The boys struggled with their line out, so word went out in the second half to take quick taps and try and get the ball out wide to the quick finishers, who would surely outpace their opposition. Some poor options with ball in hand and kicking slowed the game down, however. The Vikings did well to come back within 7 points of the Eagles, and even had some attacking opportunities in the last minutes close to the try line to even up the score, but it was not to be. Whilst the coaches were pleased with the improvements in the team’s defensive effort, the Colties will welcome this week’s preparation as they look to atone for their loss against a tough Queanbeyan Whites outfit. Vikings 12 – 19 Eagles.

On a rare cracking day out at Nicholls, 2nd Grade defeated last year’s Premiers in a 7 try bonanza to bounce back from a disappointing loss to Royals in Round 4.

Tommy Carney scored the first try, crashing over in the first two minutes after some quick thinking from JD Lealiifano. Josh Southwell-Nobbs scored the first of his brace with a good intercept, followed by Tupou Lolohea who is no stranger to the try line. The Vikings efforts stung the Eagles into action, and Gungahlin actually went into oranges leading 19-17. This didn’t last long, as very early in the second half Reece Chin popped a beautiful ball to JD Lealiifano off the back of a dominant scrum, for the nifty Flyhalf to stroll over in the corner untouched. The Vikings retained the lead for the rest of the match, with tries to Josh Southwell-Nobbs, Trai ‘Daddy Bump’ Henderson and Dirty Two’s debutant Maleli Gadai. Of special note was the fact that both Daddy Bump and Travis Pula both got through their first full game in a while, after some troubling injury issues. The 2nd Grade boys are looking forward to a home game against the Whites next weekend. Vikings 41 – 34 Eagles.

The bright, sunny day continued at Nicholls Oval, with 1st Grade ready to take on the Eagles after a bye the previous weekend.

The Vikings were keen to play running Rugby on the fast, dry track, and after some enterprising backline play Rod Iona was able to dive over in the corner on the 10 minute mark. With the Red Men dominating the scrum contest, Flyhalf Jack Evenden was able to force his way over for the Vikings to take a handy 12 – 0 lead. The Eagles hit back with a try of their own to narrow the lead, but after some charging runs from Cooper Taekata and some sneaky efforts from Captain Seamus Smith, Max Ravouvou was able to scoot over out wide. Gungahlin struck back with two converted tries to take the lead 21-17 just before half time, but were reduced to 14 men after a send off. The Vikings continued to attack, with Max Ravouvou striking again out wide and grabbing try number two for the Red Men, to take a 24-21 lead heading into the break. With the Vikings continuing to dominant the scrum and field position, Patty Maka was able to crash over and extend the lead 10 minutes into the second half. Concerted pressure from the Red Men saw talisman Seamus Smith snipe over for a try to take the score to 38-21, before the flying Fijian Max Ravouvou completed a hat trick of tries for the afternoon. Some more great forward play saw Brendon Le Galludec crash over to complete the scoring for the Vikings, and have them run out convincing winners after keeping the Eagles scoreless in the second stanza. A great performance from the boys, who cement their position at the top of the table. Vikings 50 – 21 Eagles.

That’s a wrap for Round 5. The entire Club returns to Viking Park to play the Queanbeyan Whites this Saturday the 29th of May. We will also be celebrating our annual Sponsor’s Day, and 1st Grade will play to defend the Bob Hitchcock Shield. Stay tuned to our social media for game times! 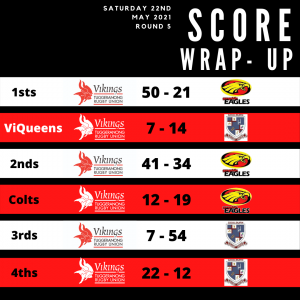