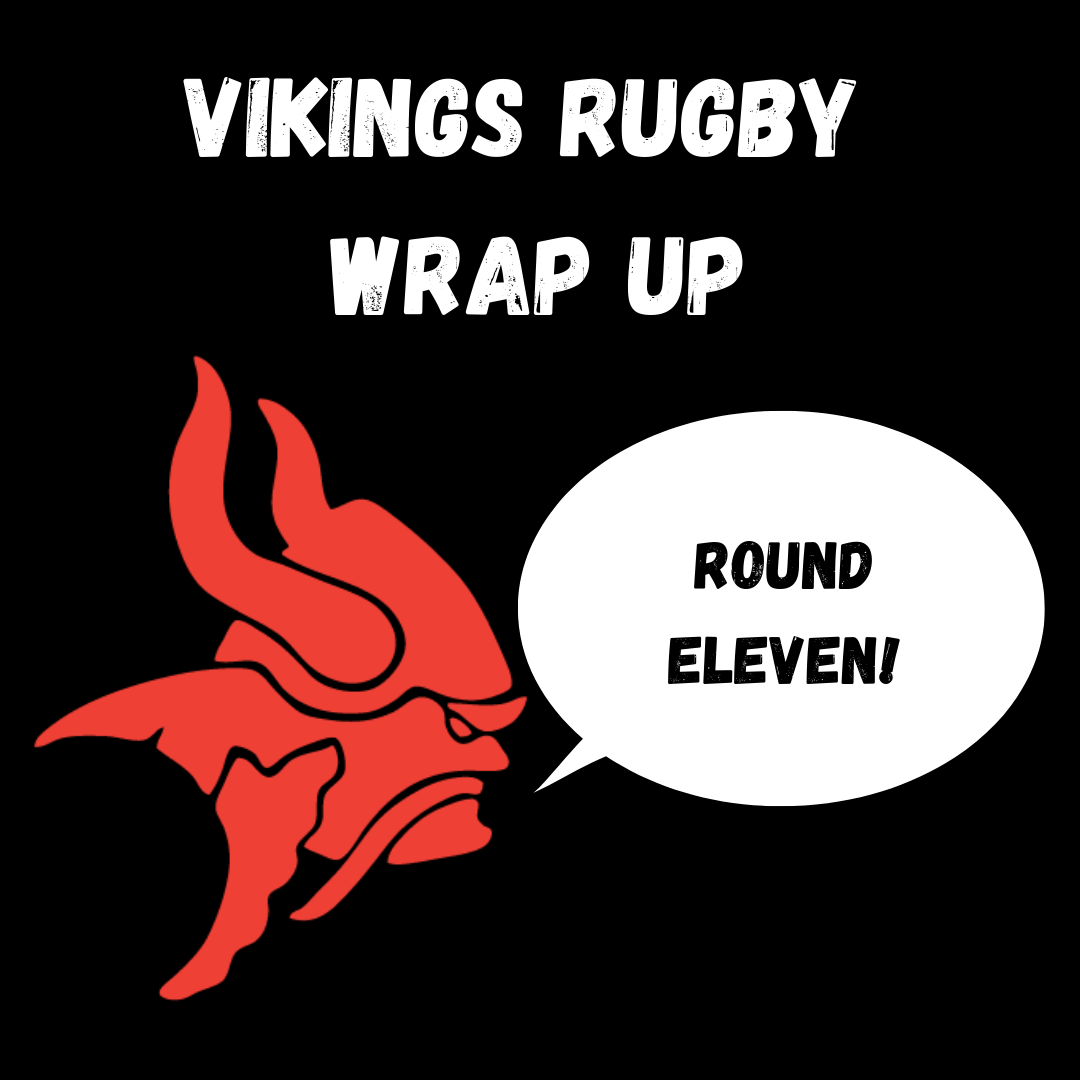 Posted at 11:21h in Uncategorized by Vikings Rugby
Share

A quiet day for the Club out at North Oval, as we went 1 from 5 across the Grades. It was a crucial win in 1st Grade, however, who locked up the Minor Premiership with their huge victory over the Uni-North Owls.

The Gen Red teams had their Grand Finals over the weekend, and we were able to come away with two awesome victories. Congratulations to the U16 Boys and the U16 Girls, who both won their respective divisions!

A special thank you to all the support staff of our Gen Red program. In a very testing year, they have thrived in a new venture and have set a successful base for all future Vikings/ViQueens. Special mention must go to Nick Scrivener and Lee Boswell, who both played a major hand in ensuring the successful implementation of Gen Red in 2020. 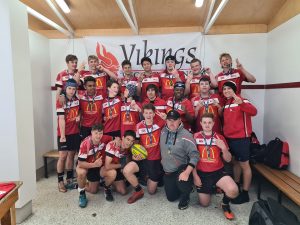 The day came with great excitement for 4th Grade, who were the first cab off the rank for team photo day. After combing their hair and whitening their teeth, the boys kicked off proceedings on North Oval #1. The first half was a grind, but the Vikings ran out to a first half 17 -7. Charlie Jackson was having a great day with the boot, slotting several sideline conversions. Billy Phimphravichith looked dangerous with ball in hand and continued to level people in defence double his size. The Vikings were the first to score in the second half, which was probably their undoing. The cue went in the rack and the Owls mounted a sensational comeback, scoring five tries in the second half to the Vikings one to steal victory. Despite the loss, 4th Grade maintained their position on the ladder and finished 3rd, and will now face Wests in a fortnight in the Semi Finals. Vikings 31 – 38 Owls.

Boosted by the inclusion of several talented Colts players, the Thirsty Thirds played out an exciting match in their final hit out for 2020, having not qualified for finals. The Owls took an early lead after some soft defence from the Vikings, however the Red Men regathered and following some great work in the forwards they answered back with a try of their own. Although forced to defend in their territory for much of the first half, the Vikings did a great job at keeping the Owls at bay, and went into half time trailing by a small margin. Kieran Reilly in his return from injury had a blinder from outside centre, and ‘Jy Time’ Jy Clarke was electric from fullback. The boys started the first half positively, dotting over the line first after some strong running by Kieran Reilly. This was followed up by another try to JD Lealiifano, who showed some individual brilliance with a dummy pass and some flashy footwork to cross over. The Owls were just too physical and well-organised, however, and they managed to run away with the game and break the hearts of this valiant 3rd Grade side. This young, thirsty Third Grade side will take a lot of lessons from 2020 – we’re looking forward to seeing them progress next season. Vikings 19 – 47 Owls.

With the Colts on a Bye weekend, the ViQueens took to Field 1 at North Oval to face the undefeated Uni-North Owls. The ViQueens got off to a quick start, nabbing an early try through Ema Masi. But from here it was all Uni-Norths, as our opponents showed us why they have been undefeated in 2020. The ViQueens were unable to get anything going against a Uni-North attack that had all of the momentum, running in 10 tries to the ViQueens 1. It wasn’t all doom and gloom for the Girls in Red – Gabby Petersen showed why she was voted our Manteena Player of the Month with another solid performance from fullback, while Ema Masi showed her strength with ball in hand and in defence. The ViQueens finish 3rd for the season, and will face Royals in a highly anticipated semi final. ViQueens 7 – 54 Owls.

The Dirty Twos didn’t end the regular season ideally, however, with 2nd spot locked in they will march into the finals with gusto. The Vikings started the game well, and enjoyed the majority of territory for most of the first half. They were unable to convert on several early opportunities, however, but to their defensive credit either could the Owls. Both teams stumbled into half time with a score line of nil all, neither able to break the other. Unfortunately, it was the Owls who awoke from their slumber first, scoring a try and two penalty goals to take a lead that they would eventually hold on to. A combined effort by big dogs Junior Sotogi and Remsy Lemisio gave the Vikings their first points late in the fixture, JD Lealiifano slotting a drop goal conversion to bring the Vikings within one score. The effort was a little too late, and the Vikings were unable to recover. Izaak Weston and Kerry McInerney had solid stints in the back row, while Jack Evenden showed his class at flyhalf. A great showing for their team dinner at the Hanara Korean BBQ displayed this team’s camaraderie, and 2nd Grade will relish the opportunity of finals football in two weeks time. Vikings 7 – 11 Owls.

With the Minor Premiership up for grabs, 1st Grade certainly had a lot to play for. They responded accordingly, in an extremely convincing victory against the Owls. In the process, the Red Men crossed for 7 tries to 2 with returning Brumby Ryan Lonergan converting all 7, all the while playing the unaccustomed position of fullback. The forwards provided a strong platform, Captain Luke Gersekowski leading the go forward. After gaining some good field position, Mikey Oakman-Hunt was able to plant the ball over the line after only 2 minutes of play for a 7 – 0 lead. Following some enterprising backline play by Andrew Robinson, the Vikings were once again on the attack deep in the Owls territory. Isaac Henry sliced his way through to cap off the passage of play with his first try of the afternoon. Some more robust forward play and some slick passing put Ngarima Low over in the corer, the Vikings taking a 21 – 0 lead after only 20 minutes of play. The Owls were able to get one back before the close of the half, but a cut out pass from Tom Hooper set up Isaac Henry’s 2nd try of the game for the Vikings to head to oranges 28 – 7 up. The excitement continued in the second half, Tom Hooper showing some razzle dazzle to set up Mikey Oakman-Hunt for his brace of tries. Brumbies Darcy Swain and Lachlan Lonergan entered the fray at the 50 minute mark, and it didn’t take long for the Vikings to strike again, this time through Seamus Smith who scampered across the line to dot down next to the posts. Andrew Robinson capped off some more brilliant forward play with a try of his own, to extend the lead well out of reach. The Owls managed to grab a late consolation try, but the Minor Premiership belonged to the Vikings. The Vikings will enjoy a well-earned break before heading into the Semi Final against an in-form Gungahlin side. Vikings 49 – 12 Owls.

That’s a wrap for Round 11, and a wrap for our regular season. We are extremely grateful to have even had one game in 2020 let alone a full season, so from all of the Vikings, thanks to everyone that has made Rugby in a COVID-struck year possible. We now head into a Bye weekend before marching on into Finals in 1st Grade, 2nd Grade, Colts, Women’s and 4th Grade. Stay tuned for more information on finals and spectator attendance, and wish our boys and girls luck as they prepare for premiership glory! 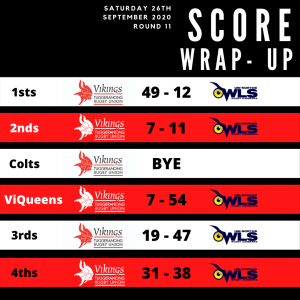