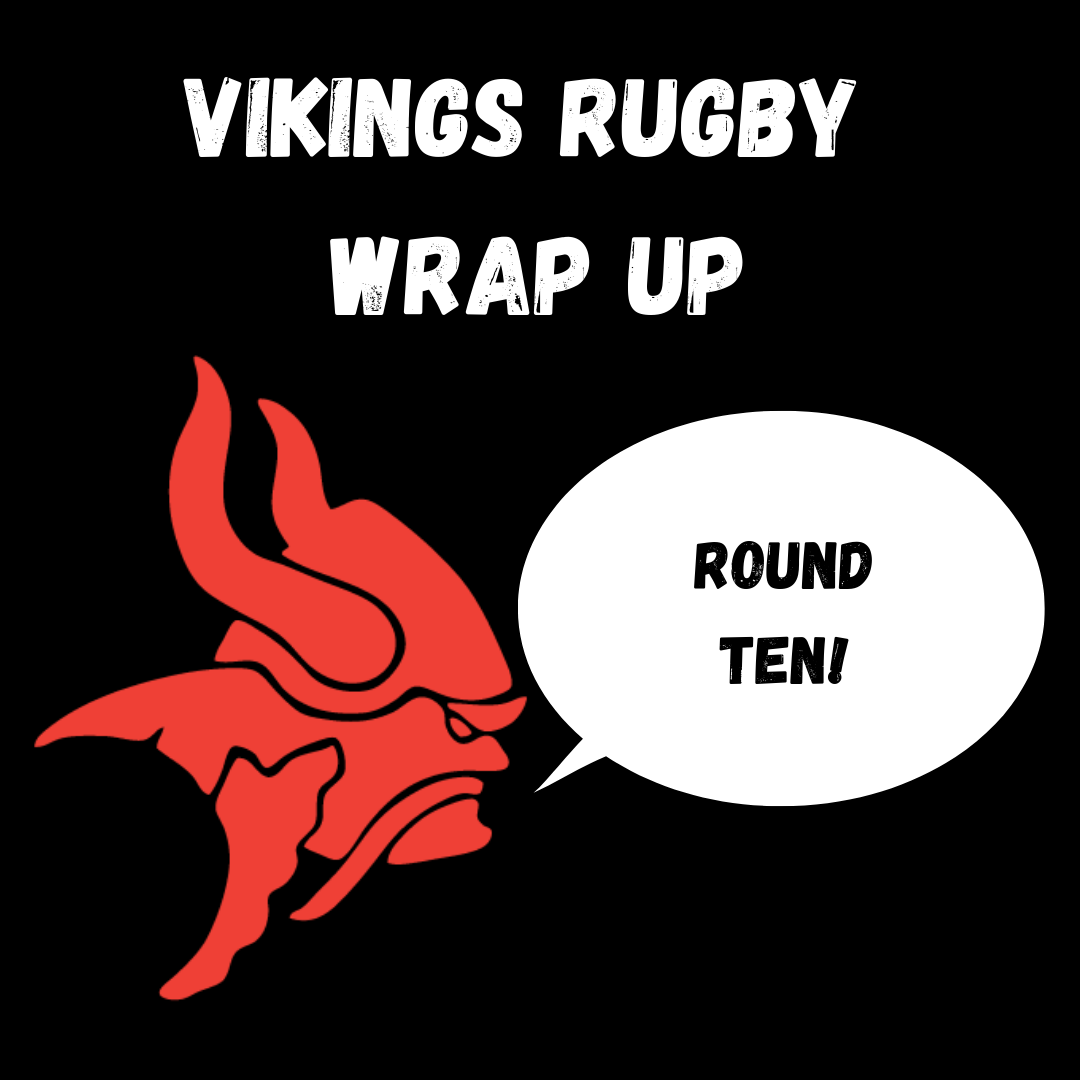 Posted at 14:46h in Uncategorized by Vikings Rugby
Share

It was an absolute pearler of a day at Viking Park, which made our Ladies Day all the more enjoyable. A special thank you to all the women who joined us at Viking Park on the weekend for our Rolfe Classic BMW Ladies Day, everyone that helped with the organisation and execution of the day and all the stall holders for joining us for our inaugural Vikings Marketplace. Another thank you to Ladies Day sponsor Rolfe Classic BMW for all their support. The Rugby on display was fantastic, too, the Vikings going 4 from 6.

Not a bad hit out for our Gen Red teams over the weekend, who played their final game for the season before they head into finals Saturday coming.

4th Grade got the day underway with an excellent win on Field 2. Enjoying this new concept of playing footy in the spring, the Vikings had a strong first half where they scored 4 tries to 1 for a 24-7 lead heading into the sheds. Prince of Vikings Will Callen had a blinder of a game, despite running in the wrong direction to score his first try. Billy Phimphravichith has been an excellent find in the mid-field, displaying some classy footwork and belting blokes in tackles double his size. And everyone’s favourite jolly Englishmen Matt Wafer was at his usual best. The second half was a great defensive display by both teams, with only a try each to the Vikings and Gungahlin to close out the match. The highlight was Duane Petersen channelling his inner quarterback to throw a pass 30m across field, obviously placing little trust in scrumhalf Beau Mokotupu and flyhalf Bryce Taotua to shift the ball to where it needed to be. Vikings 31 – 14 Eagles. Who knew Peni Nifo could kick for goal?

A tough match for the Thirsty Thirds, who took on top of the table Gungahlin. Despite Coach Gordon-Douglas lacing up the boots to boost the Vikings stocks, the Red Men once again started low on numbers. Although starting with possession and playing with some good intent, the Eagles took their first opportunity with both hands and scored within the first 10 minutes. The Vikings were determined to stay in the game, with Captain Courageous Matt Jolley once again having a fantastic game. Prince of Vikings Will Callen also got amongst the action, coming off the bench for 3rd Grade and making his presence felt. ‘Jy-Time’ Jy Clarke made a welcome return to the Vikings pack at fullback and had a busy game. Despite what the score line read at fulltime, the Thirsty Thirds didn’t give up, and still managed to finish the game in good spirits. Vikings 0 – 101 Eagles.

The Colties took the field in honour of a player whose grandmother passed, the Vikings wearing black armbands in support of their mate. The Vikings started the game strong with some solid phase play. Wingers Miguel Fernandez and Tupou Lolohea were the beneficiaries of the Vikings front foot ball, threatening the Gungahlin backline out wide. Gungahlin however would open the scoring against the run of play with a try. But the Vikings responded quickly, Aedan Billiards crossing the line after a sneaky dart from the ruck. Both teams went tit for tat, but it was the Vikings who went into halftime with a narrow lead, 21-17. The Vikings had some good momentum throughout the second half, looking great on attack and managing to maintain the lead with a converted try. Bailey Goymer-Peak played like a man possessed, as did his lock partner Darcy McLeod. JD Lealiifano showed why there are such big wraps on him, having a clinical game at flyhalf. With less than 5 mins to go in the match, Gungahlin got some turnover ball and raced 90m down field to score a try that put them in front by 1 point. The Vikings mounted one last attack, but unfortunately fell short after the hooter. There’s still a lot to like about this Colts team, as we look towards the finals in three weeks time. Vikings 28 – 29 Eagles.

Playing for the first time on Field 2, the Dirty Twos pulled off a magnificent win against the previously unbeaten Eagles. In front of a smaller crowd than they are accustomed to, both teams scored two tries apiece, but it was a penalty goal that decided the outcome. The win came off the back of another huge defensive effort by the Vikings, as well as the motor of the forward pack.

The Vikings stunned the Eagles by scoring first, through yet another cheeky try to Reece Chin. Kerry McInerney did little to enhance his looks after copping a stray boot to the face, right where he had been split two weeks ago. Sione Taula reminded everyone that he is still the most dangerous man at the Club, pulling off several bell ringers over the course of the game. Young prop Remsy Lemisio sealed the game for the Vikings, after picking the ball up from the back of the ruck and powering his way over for an easy conversion to get the W. With second place on the ladder all but sown up, the Vikings will enjoy their match against Uni-North this coming Saturday before racing into the finals. Vikings 17 – 14 Eagles.

To celebrate our Ladies Day, the ViQueens were given a prime time slot on Field 1, in front of close to 100 women who were enjoying the fesitivites at the marquee. The girls were ecstatic that they had the chance to showcase their skills to their loved ones, who were not only present at Viking Park but also had the opportunity to watch the match on the live-stream.

The girls had a tight match against Goulburn, who in their last encounter made them work for the win. The ViQueens started off with an early try to Kathryn Niki, who dotted down in the corner. Although the weather was favourable for spectators, the heat taxed the ViQueens, particularly in the forwards. Despite this, the ViQueens forward pack held strong and put on some big hits, which laid the platform for backline stars Gabby Petersen and Zali-Waihape Andrews to run amuck out wide. The ViQueens went into halftime with the lead, which gave them an opportunity to catch their breath. They started the second half slowly, but as per usual, they eventually settled in and started taking on the line more, their confidence beaming through. The ViQueens secured an excellent win, keeping Goulburn to only one try and scoring some crackers for themselves. Reports from the ViQueens camp are that they felt like royalty playing in prime time on Field 1, and that the field seemed a lot bigger than their usual playing surface. ViQueens 19 – 5 Goulburn.

The Vikings were playing for two pieces of silverware – the Bob Hitchcock Territory Shield, which we have held since the end of last season, as well as the Roman Warcaba Cup, an annual trophy that the Vikings and Eagles play for in memory of a Vikings legend, Roman ‘Wacca’ Warcaba. However, what really capped this special day for the Club was the 1st Grade side having their jersey presented to them pre-match, by an important female figure in their life. The players invited either their partner, mother or sister to present them with their jerseys, which was a really special moment and a great initiative as part of our Ladies Day celebration.

The Vikings did not disappoint in this huge match up, running out convincing winners with a brace of tries to Jed Englert and Max Ravouvou in the first half, to leave their shell-shocked opponents 24 – 0 down heading into oranges.

In an enterprising start to the match, some great forward play put the Vikings into the Eagles red zone. Talisman Isaac Thompson and Jed Englert displayed some slick hands to put Max Ravouvou over for his first, with only 90 seconds gone on the clock. After mounting more pressure through the forwards, Lukey G and Andrew Robinson combined to put the Vikings deep into Eagles territory, Jed Englert converting the hard work with his first 5-pointer of the match. Andrew Robinson was also bashing people in defence, at one stage putting on three bone rattling shots in succession. With the forward pack well and truly in control, the Vikings took advantage of good field position for Jed Englert to nab try number two for the afternoon, following a nice pass from Isaac Thompson. Max Ravouvou sent the Vikings into the sheds 24-0 up off the back of a smart quick tap from Seamus Smith. The bruising encounter continued in the second half, with end to end play and no quarter given from either team. The Vikings scrum continued to provide a great platform from which to attack from, the backline taking every opportunity. The Eagles were able to score a few consolation tries at the back end of the game, but penalty goals to Jack Evenden iced the game for the Vikings on a special day for the Club. The Red Men came away with a huge win on Ladies Day, finished the year as Bob Hitchcock Territory Shield champions and took back the heralded Roman Warcaba Cup. A big thank you to Roman’s son, Liam, who presented the cup to the Vikings at the conclusion of the match and spoke excellently in memory of his father. Vikings 30 – 12 Eagles.

That’s a wrap for Round 10. Only one round remains in our regular season, as we take on the Uni-North Owls at North Oval. A win in 1st Grade will secure the Minor Premiership, and set the Club up nicely heading into Finals on the 10th of October. Stay tuned to our social media for game times and information on spectator attendance! 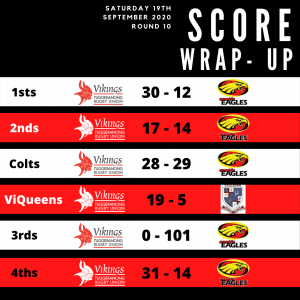