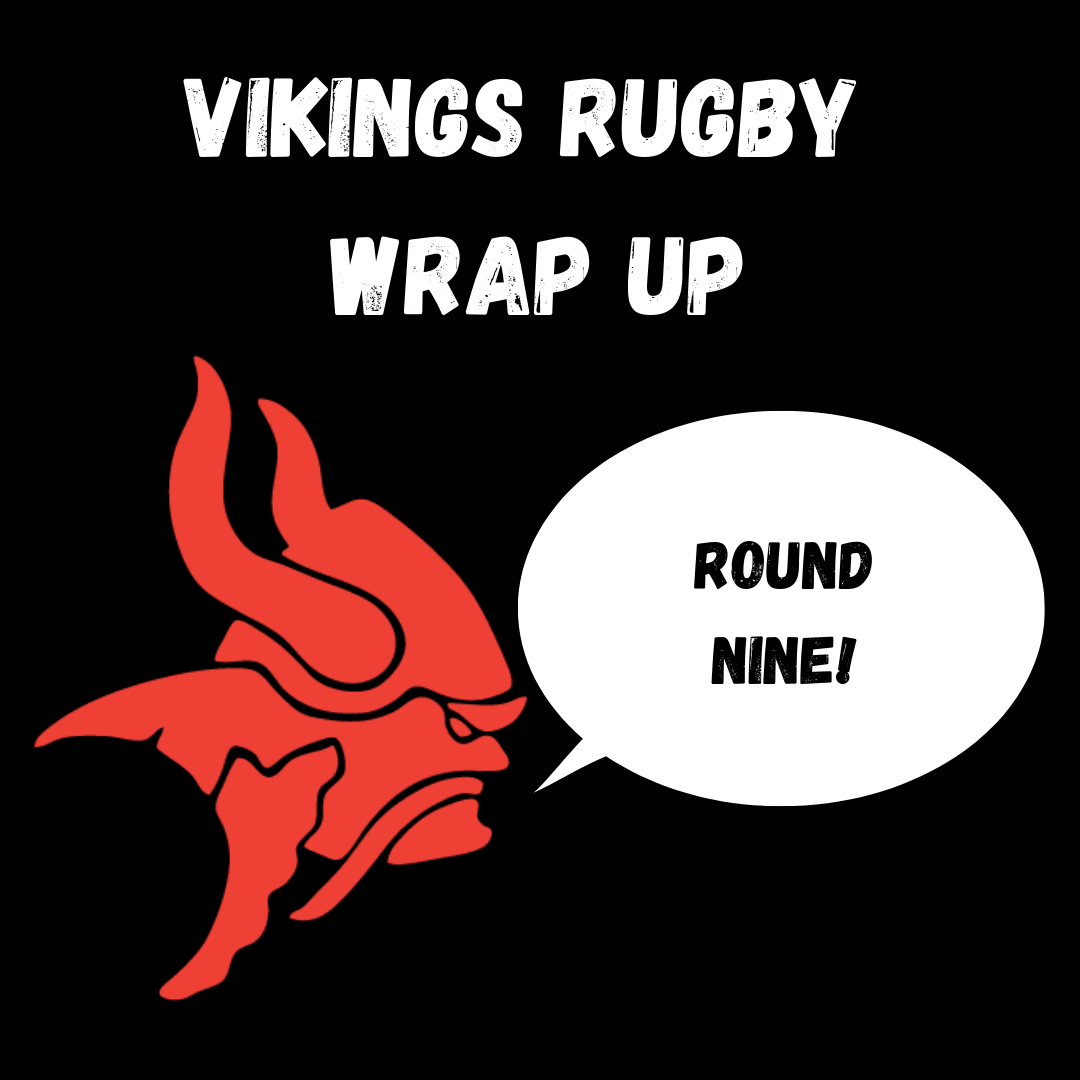 Posted at 13:44h in Uncategorized by Vikings Rugby
Share

A fantastic day to be a Viking. The Club went 5 from 6 in glorious weather, in front of our Old Boys for Hagar’s Day. There are few days on the Vikings Rugby calendar that are more special than Hagar’s Day – we’re thrilled that we were able to honour the Vikings of old with some stellar performances on the paddock.

A largely excellent weekend for our Gen Red teams, who went 3 from 4 on Saturday.

What a difference a couple of weeks and an influx of Vikings old boys makes to a side. In their previous encounter, Wests 4th grade demolished the Vikings 48 – 21. As you will soon find, the scores were very much in the Vikings favour this time around. Matt Wafer ran the Vikings out on to the field for his 100th game, an awesome achievement for a loyal servant of the Club. The Vikings wasted no time, putting Wests to the sword with a blitz of first half tries. In his 100th game, Matt Wafer led from the front at Prop, carrying hard, dominating the scrum and bashing people in defence. He was joined by Peni Nifo and Conan Va’aga, who had equally destructive games from No. 8 and Lock. The Vikings went into half time up 6 tries to 1, but this was hardly the talking point. Much discussion on the sidelines centred around former 1st Grade premiership winger JP Mynhardt, who after clearly giving up any form of running since retiring resembled a baby deer on ice skates with ball in hand. Conversation also surrounded Damien ‘Mike Tyson’ Gubler, who after picking on the biggest player in the Wests backline played the rest of the game on the wing and hastily jumped in his car and left the ground at full time. Ryan Slater, who made a welcomed return at Hooker, told anyone that cared to listen to him about his memorable 200th game in the warm up, and Riley Banks had one of his finest games for the Club at Scrumhalf. The pairing of Cameron Shaw and Andrew Dickson has aged well, and the two men guided 4th Grade to a fantastic victory to kick off Hagar’s Day. Matt Wafer also slotted a conversion to ice his 100th. Vikings 89 – 26 Wests.

Things were already looking ominous for the Thirsty Thirds when Swanny Puteho joined the huddle in the sheds with his jersey on backwards. Unfortunately, the Vikings started the match once more several men down, and Wests were able to capitalise with a quick try off the kick off. It became more and more difficult for the Vikings to cover the extra space out wide, resulting in Wests scoring more points. After managing to maintain some possession, the Vikings displayed some strong running, led by Captain Mullet Matt Jolley, who had a standout performance. Heads were down at half time, but with a consolidated effort and renewed enthusiasm the Vikings hit back with a great try to Backrower Sam Doak, who after seagulling out on the wing scored a controversial try. A great sideline kick from Owen Barker had the linesman confused, one flag going up and one flag staying down, but the referee ruled in favour of the Vikings who picked up the 2 points. The Thirsty Thirds stuck in it for the rest of the game, but being down a man for so long hurt their come back potential. The boys gave their all when the chips were down, and still came off the field with a smile on their face. Vikings 7 – 67 Wests.

Stefanie Stewart-Jones led the ViQueens out for her 100th game celebration for the Club. A huge congratulations to Stef, who became the Club’s first female 100 gamer, an outstanding achievement. The girls had an absolute cracker of a game after having the bye last week, flashing some individual brilliance. Stef Stewart-Jones had a great game, despite coping an elbow to the throat that affected her breathing and took away her voice. Nirada Phonsaya was brilliant on the wing, making several probing runs and holding strong in defence. Gabby Petersen was her usual self, playing a crucial role from Flyhalf and opening up the backline to run a muck. There were some truly impressive team tries that came off the back of quick hands and offloads. This writer witnessed a contender for try of the year, when Gabby Petersen, Zali Waihape-Andrews and Nirada Phonsaya capped off a brilliant line break from deep in the Vikings half with a try near the posts. Of course, it’s important to recognise that the brilliant play in the backs came off the back of dominance in the Forwards, who controlled the set piece and had several key carries. The girls were oozing with confidence, and will take a lot from this game heading into the last two weeks of the season. ViQueens 46 – 7 Wests.

It was a slow start by the Colts, whose first half performance was lacklustre. Wests came out of the gates firing, and stunned the Vikings by scoring the first try. Some strong carries by Pat Maka and the destructive presence of Daryl Bailey got the Vikings back on the front foot, and a scintillating try at the end of the first half to Tupou Lolohea had the boys go into the sheds with a narrow 12-8 lead. A rev up from Coach Allardyce spurred the Colties into action, and they started the second half with renewed vigour, the Vikings scoring 2 tries within 10 minutes. Great kicking from JD Lealiifano and Josh Story kept putting the Vikings in good field position, and off the back of this some brilliant counter attack put Darcy McLeod over for a try to extend the lead. Miguel Fernandez was the next to score, after a great short ball from Zion Going put the speedy winger down the sideline for a try. Tough carrying from Darcy McLeod and Willy Mariner kept the Vikings momentum rolling, and it wasn’t long before JD Lealiifano displayed some razzle dazzle to dance across the try line. Despite an average first half, the Colties were able to make amends and finish with a great win. Their defensive effort in the second half was outstanding, not allowing Wests in for another point. Vikings 43 – 8 Wests.

Another huge defensive effort by the Dirty Twos, who took on a gallant, physically bigger Wests side. Late changes gave Michael ‘Chic’ Henry and Sione Taula their first taste of Premier Rugby in 2020. Chic unfortunately suffered an ankle injury early on in the piece, but Sione, as we’ve come to expect from him, was dangerous in defence – if anyone has seen the ribs for the Wests Fullback, please send us a DM. Prop Junior Sotogi was once again a human wrecking ball, flattening people with ball in hand. Junior picked up the Vikings first try after some sustained pressure in Wests 22. Reece Chin was next to score, another cheeky sniping run getting him over the line. Nic Marshall capped off the Vikings scoring with an electrifying effort. Wests were able to narrow the score late in the piece, which made for some tense moments in the Vikings camp, but of course, the boys were up for the challenge and were able to hold Wests at bay. An excellent win in 2nd Grade, the Vikings getting it done. Vikings 21 – 19 Wests.

The 1st Grade side took the field donning their specially made Heritage jerseys, in front of a rambunctious group of Old Boys at the Red Army. A dominant display led by a hungry and determined forward pack, the Vikings tamed the Lions in a 10 try feast to return to the top of the table with 2 rounds remaining. After an early penalty goal to Isaac Henry, the brothers Smith combined in a smart interchange to see big brother Callum gallop over near the posts for the Vikings to take a 10 – 0 lead after 10 minutes. Wests were able to cross not long after to reduce the margin, but a penalty try to the Vikings further extended the lead. The evergreen Isaac Thompson capped off some enterprising play from deep in the Vikings half with a try, the 8 or 9 offload extravaganza putting the Flyhalf over in the corner. Big Tom Hooper was proving a real handful for the opposition, tearing through the line for Max Ravouvou to finish off with another try in the corner. Not long after, Tom Hooper busted the line again, this time striding over for a score of his own. The score line at oranges sat at 36-10 to the Vikings, but they weren’t about to rest on their laurels. Michael Oakman-Hunt scored one of the best solo tries witnessed by this writer, taking it off the base of the scrum on the half way and beating several defenders to extend the Vikings lead. Wests were able to nab three tries back, but scores to James Douglas, Jed Englert, Cam Holt and Michael Oakman-Hunt nullified any hint of a momentum shift. A superb display of Rugby from the Vikings, who invited the Old Boys on to the field post match to sing the Club song. Vikings 71 – 29 Wests.

That’s a wrap for Round 9. Another special congratulations to our 100 gamers on the day Matt Wafer and Stef Stewart-Jones, as well as to the other 100 Club inductees Callum Smith and Jack Cartwright. Next week, we’re back at home against the Gungahlin Eagles. Saturday will also serve as our Ladies Day, which is shaping to be a ripper of a day. Stay tuned to our social media for more information on game times! 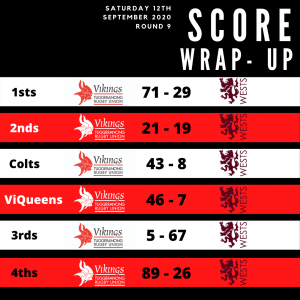