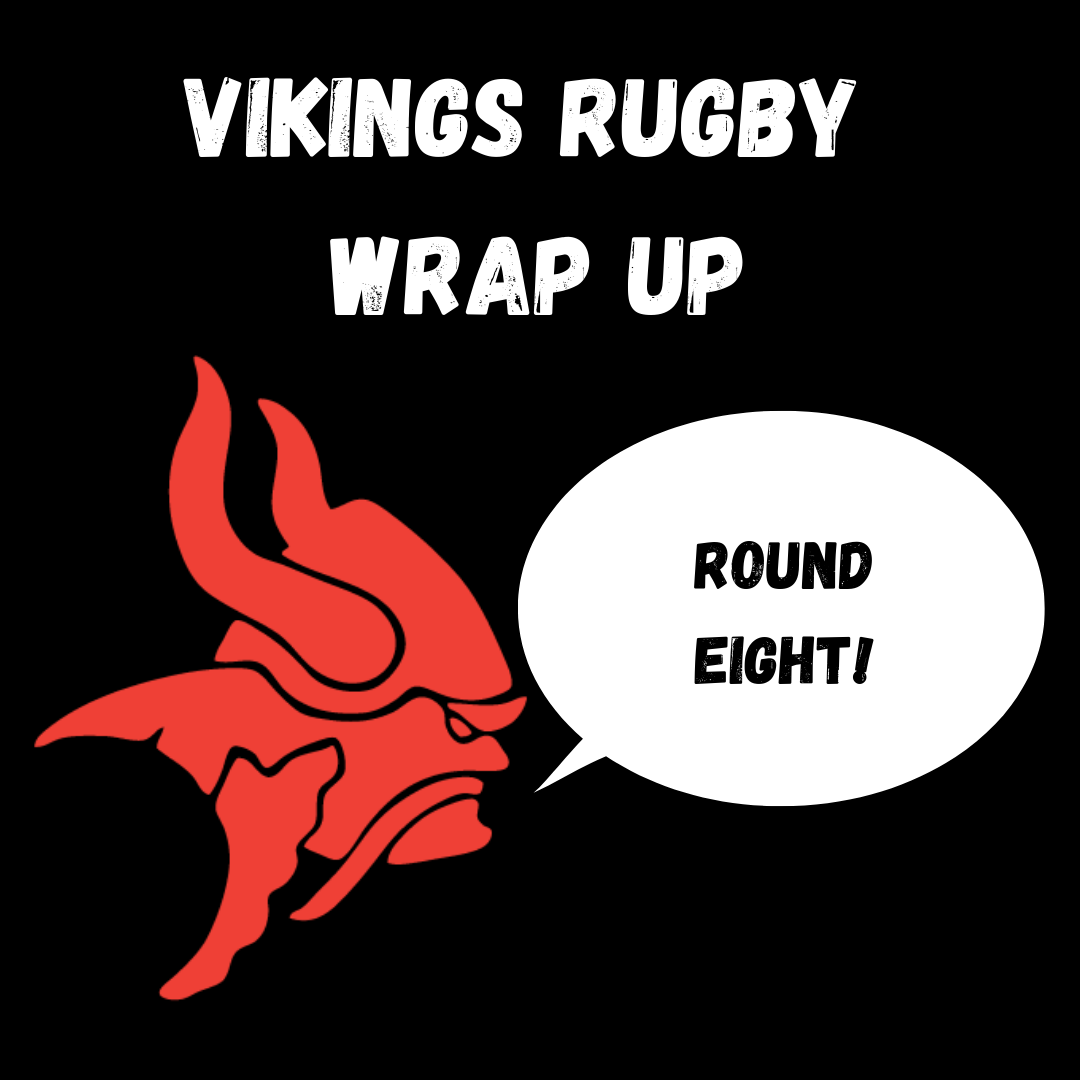 Posted at 14:38h in Uncategorized by Vikings Rugby
Share

Another cracking day on Saturday for Rugby, with the cold, winter weekends slowly becoming a thing of memory, at least for this year. The Vikings played the Queanbeyan Whites out at Campese Oval, going 2 from 5 on the day.

The Gen Red Girls keep the good times rolling, while the boys had some tough results.

4th Grade got proceedings underway at Campese Oval, in a first half that looked pretty evenly matched. Queanbeyan were the first to cross for a try, but the Vikings responded shortly after with a break away try to the Prince of Vikings Will Callen. Although going toe to toe with their opponents, the Red Men missed too many opportunities in the first half, while Queanbeyan stuck to their game plan and took theirs. Half time 5 – 19 Queanbeyan’s way. The second half was all Queanbeyan – they continually had the Vikings on the back foot and took advantage of a tiring forward pack. Despite this, Jordan Van Aalst and Billy Phimphravichith had solid games in the mid-field, while Dan Uilelea made a welcome return to the side following some time off with injury. 4th Grade are due several ring in’s for Hagars Day next weekend, but wins are crucial at this point in the season and they will need to bounce back quickly. Vikings 5 – 55 Queanbeyan.

Another testing day for the Thirsty Thirds, who took on 3rd placed Queanbeyan. The Vikings started the game with only 13 players and the Whites took full advantage of this overmatch, penetrating over and around the dogged 3rd Grade defence. Despite only having a small piece of possession in the first half, when the Vikings had the ball they looked good, moving forward well and just coming up short on several occasions to score. Unfortunately, a deficit of 0 – 40 at half time is a tough one to overcome, and the Vikings were exhausted heading into the sheds. But their spirits wouldn’t be broken. A revived effort in the second half managed to hold Queanbeyan off on several occasions, which is a testament to the Vikings resilience. James Weir had a tough game in the forwards, while little Frank Tameo showed some flair from Scrumhalf. At full time the Vikings had played their hearts out and still had smiles to share. Vikings 0 – 64 Queanbeyan.

The Colties got off to a strong start, leading the way with some great defence all over the park. They were the first on the board through the boot of JD Lealiifano, after converting pressure in Queanbeyan’s 22 into points. The Vikings followed this up with another score, after a 60m break and some great interplay on the sideline put try scoring machine Tupou Lolohea over for this first of the day. Queanbeyan were quick to respond, after a sneaky grubber into the back field was recovered and narrowed the Vikings lead. The game started to get a little messy with handling errors and some indecision amongst the Vikings ranks, but the Red Men were able to find their feet and string together a nice attacking set that put Tupou over for his second try. The end of the first half was all Queanbeyan, who camped down in the Vikings 22 thanks to their strong set piece and after a long period of defence for the Vikings, Queanbeyan were able to crash over and bring the score 17 – 12 the Vikings way at oranges. You’re probably sick of hearing it, but Patty Maka was outstanding once again, giving the Vikings great front foot ball with his carries. Bailey Goymer-Peak had another industrious game, while JD Lealiifano controlled the backline superbly. The second half was a tight battle, the lead changing hands on several occasions as both teams looked to take the upper hand. With no time left on the clock and the Vikings down 20-26, the Red Men played some patient footy, and after spinning the ball wide Ngarima Low crashed over to give the Vikings a shot at winning. To the dismay of this tough Colts side, the try couldn’t be converted. None the less, a solid and entertaining game for the Colts, who remain on top of the ladder. VIkings 25 – 26 Queanbeyan.

Welcoming back several key cogs to their side, the Dirty Twos had an excellent day out at Campese Oval. The Vikings jumped out of the gates to a 26-3 lead after 17 minutes. This was the last time the scoreboard was bothered, however, until late in the second half when Queanbeyan scored a late consolation try. A strong defensive effort, led by lock Cooper Taekata and centre Hunter Davis got the Vikings over the line comfortably.

Kichie Navuso, in his return from injury, was the first to score after a lovely pass from Nic Marshall. A nice breakaway from Hunter Davis and a wise decision not to pass to his supporting winger saw him dot down under the posts to further extend the Vikings lead. Next was TJ Sione, who was the beneficiary of some rampaging runs through the forwards. Captain Reece Chin capped off the Vikings try scoring, slinking his way under the posts after spotting a big hole in the Queanbeyan defence. Further highlights for the day included Kerry McInerney picking up a nasty gash on his forehead, that surprisingly made him look better. Overall, a great game for 2nd Grade who now sit comfortably in 2nd place on the ladder. Vikings 26 – 8 Queanbeyan.

After last weekend’s close loss to Royals, 1st Grade were keen to make amends against Queanbeyan. The match started with immediate impact by Tom Hooper, who managed to grab hold of the ball from the kick off and put the Vikings hot on attack. A penalty allowed the trusty boot of Isaac Henry to put the Vikings on the board with less than 2 minutes on the clock. After some great goal line defence, the forwards, led by Mikey Oakman-Hunt and Luke Gersekowski, took hold of momentum and battled their way back into Queanbeyan’s 22, Isaac Henry converting another penalty. Queanbeyan stunned the Vikings with a converted try of their own, taking the lead after only 15 minutes of play. The Vikings were spurred into action, and Jed Englert finished off a superb backline move to regain the lead. The Vikings rolling maul was once again putting huge pressure on their opposition, and off the back of this the human wrecking ball Sua Tonga crashed over to stretch the lead 20 to 7. Right on half time, some smart play from Seamus Smith allowed him to duck over for a try and head into the sheds with a 25 to 7 lead. A special mention to Callum Smith, who after entering the fray in the second half earnt his 100th cap for the Club. Now running down hill, the Vikings capitalised once more on their rolling maul to put hooker James Douglas over. Some stinging defence from Cameron Holt and Andrew Robinson allowed the Red Men to rumble downfield again, and it was Max Ravouvou who joined the try scorers list with a meat pie of his own. The highlight of the game was watching Ngarima Low make his 1st Grade debut in spectacular fashion. With his first touch of the ball, Ngarima beat several defenders to score in the corner, and following this had several nice touches in attack and defence. A well deserved victory for the Vikings, who will take a lot of momentum heading into Wests this coming weekend. Vikings 40 – 21 Queanbeyan.

Special mentions to Ben Gillespie, who played his 1st Grade run on debut, Ngarima Low, who made his 1st Grade debut, and to Callum Smith, who celebrated his 100th game for the Club.

That’s a wrap for Round 8. This weekend, we’re back at Viking Park against Wests. Saturday is also our annual Hagar’s Day, so make sure you buy your ticket and join in on the best day of the year! Tickets can be purchased by clicking here. 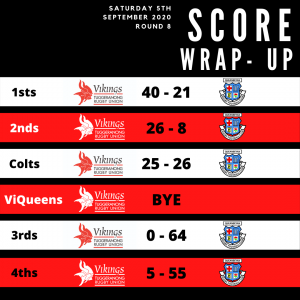