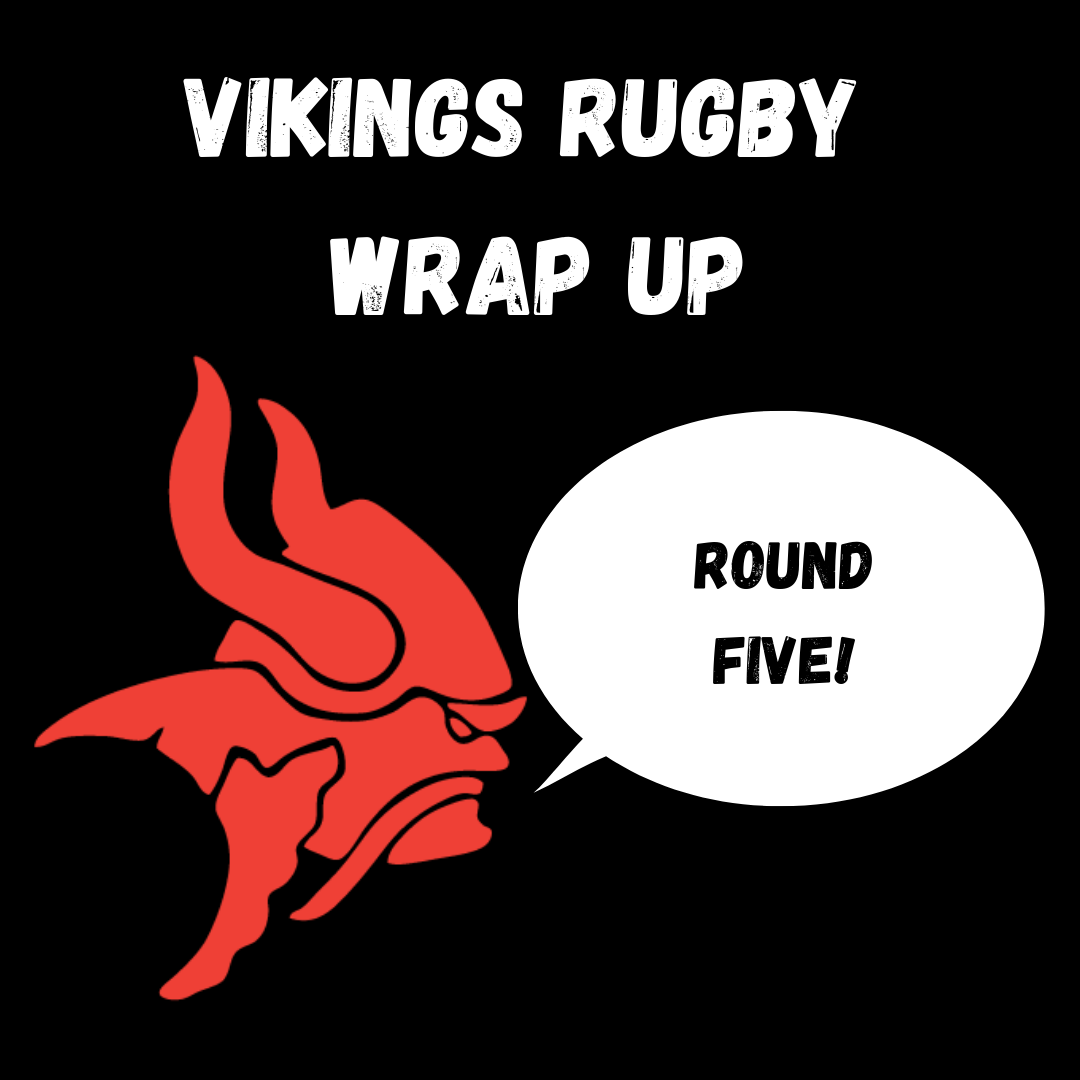 Posted at 15:29h in Uncategorized by Vikings Rugby
Share

Although the weather from Round 4 carried into Round 5, the Vikings played out some very exciting football, winning three, losing one and drawing one. All Grades took on the Uni-North Owls. A special mention to our sponsors and partners that joined us for our annual Sponsor’s Day on Saturday. Despite the weather, it was another great day with good food, good drink and merriment.

An largely positive weekend for our Gen Red teams, who came away with a win in every Grade but the U18 Div 1. It was also a special weekend for our U16 Boys side, who in Colts absence played an entertaining match on Viking Park Field 1.

4th Grade began proceedings on Field 2. After what felt like a disjointed start by both teams, it was the Vikings who got the rub of the green, and raced out to a 21-0 lead off the back of 3 converted tries in the first half. Colts aged players Harper Kemp and Ethan Makaua-Farani were welcome additions for 4th Grade, playing at Flanker and Inside Centre respectively to create some real damage for the Vikings. The second half saw Uni-Norths mount a comeback, spurred on by a notable Wallabies inclusion who’s appearance at warm up was met with great displeasure from a certain Viking (hint: a jolly English prop). Fortunately for this Viking, it was his best mate Grant Lukins that was folded in half by the capped Wallaby. Uni were able to close the gap in scoring following a Viking yellow card, the scores set at 21-19. Vikings scored a barnstorming try to extend their lead, but with two minutes remaining, Uni were able to get one back, locking the scores at 26 all. The Vikings got the ball back, and after stringing some excellent phase play together were able to move the ball into Uni’s half and draw a penalty after the siren, 40m out in front. Josh Story, cool as a cucumber, lined up the kick and threaded it between the posts, to give the Red Men a memorable victory. Vikings 29 – 26 Owls.

The Thirsty Thirds, also bolstered by the Colties who had a bye, started on fire. The weight of possession tolled on the Owls defence, allowing Travis Pula to break through for the first try. Owls struck back with an awkwardly kicked ball that bounced under the posts that they were able to get to first. As the rain came down, the game became messy but the Vikings were able to keep their structure and were the next to score after a Swanny Puteho try. Ill-discipline gave the Owls several penalties and good field position, and as a result that were able to even the score again. Ethan Brazel muscled his way over for a try just before half time, however, to give the Red Men the lead. Colts Nick Wald and Aedan Billiards were showing good flair for the Thirds, as was Captain courageous Dan Uilelea. Shortly into the second half, the Owls scored their third try to level the scores 21 all. The wet weather was taking its toll and the slippery ball cost both teams valuable possession and a chance at victory. The Owls missed a penalty goal to win, while Dan Uilelea’s lack of calf work got the best of him, and a cramp 20 metres out from an unprotected try line saw him cough up the ball and a run away win. Both teams played a tough game and were both deserving of the win, as the final score line would reflect. Vikings 21 – 21 Owls.

The girls were a bundle of nerves as they faced the reigning premiers – whether this was for the match itself or the thought of what they would wear to the after-match dress up is yet to be determined. However, in true ViQueens fashion they never backed down and played with grit and determination. Mikaela Callender was again impressive, putting on big hits and making her presence felt in only her third game with the Club. The Owls are a seasoned football team, and put pressure on the ViQueens all match. The boot of Gabby Petersen was a useful asset, as she got the girls out of trouble on several occasions. Violeta Tupuola and Ema Masi were given the cheese for ill-discipline which put Stef Soupy-Jones in a fit, but overall the ViQueens can be proud of their effort. The score line didn’t reflect the scramble defence, the solid passages of play and the resilience that the ViQueens are known for, and they will take a lot of lessons from this match as they head into the second half of the competition. ViQueens 0 – 29 Owls.

Despite the fact that both the Head Coach and Manager were late for warm up, the Dirty Twos came away with a great victory to make it two on the trot. The match was an arm wrestle, as is typical between these two teams, but a mix of experience and youth gave the Vikings the edge. Pat Maka, who again was outstanding, opened the scoring off the back of a strong carry. This was followed by Tommy Carney, who notched a double on the day to extend his try tally for the year. JD Lealiifano’s radar was on point, converting two tries and knocking over a crucial penalty. It was also great seeing Trai ‘Daddy Bump’ Henderson back in the thick of things, after having struggled with hamstring issues at the start of the season. 2nd Grade have found their mojo again, and will need to retain this strong form heading into the back end of the competition. Vikings 22 – 19 Owls.

The Vikings were looking to atone for last week’s loss, as they faced an unbeaten Uni-Norths side. The match started with plenty of feeling from both teams, as each tried to dominate field position. After trading penalty goals, it was Viking Isaac Henry who crossed the white line first after a rampaging run from Sua Tonga and some brilliant interplay with Winger Max Ravouvou set up the fleet footed Centre. Michael Oakman-Hunt, Tom Hooper and Andrew Robinson were bashing people in defence to keep the Red Men in the lead, but the Owls were able to notch a try of their own and another penalty to lock the scores at 13 all heading into the sheds. Shout out to Remsy Lemisio, who made his 1st Grade debut off the bench just before halftime. Despite the rain continuing to fall, the Vikings kept attacking the Owls in the second half, and after a fabulous snipe by Seamus Smith and some patient ball carrying, Sione Mau crashed over next to the posts to take back the lead for the Red Men. Isaac Henry would extend this lead with 25 minutes to go, but a costly yellow card and some poor decisions from the Vikings allowed the Owls back in the game, and the students took a 25-23 lead with 10 minutes remaining. It set up a grandstand finish to the match, the play going end to end, but it was Isaac Henry who once again, stepped up and made the play. Zaccy somehow nabbed a high ball over his shoulder, and ran back at pace to slice through the Uni defence to give the Vikings excellent field position. The Owls conceded a penalty, and Isaac stepped up and slotted the penalty to give the Vikings the lead once more with time almost up. In a tough, bruising game of football, the Vikings would hold on to this lead and come away with the choccys. Another special mention to TJ Sione, who made his run-on 1st Grade debut on Saturday. Vikings 26 – 25 Owls.

That’s a wrap for Round 5. It’s a competition wide bye so no Vikings teams will be playing this weekend, the boys and girls earning a hard earned break at the halfway point of the season. We resume match play on the 29th of August, when we take on Royals Rugby out at Phillip. 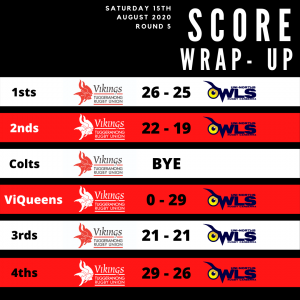