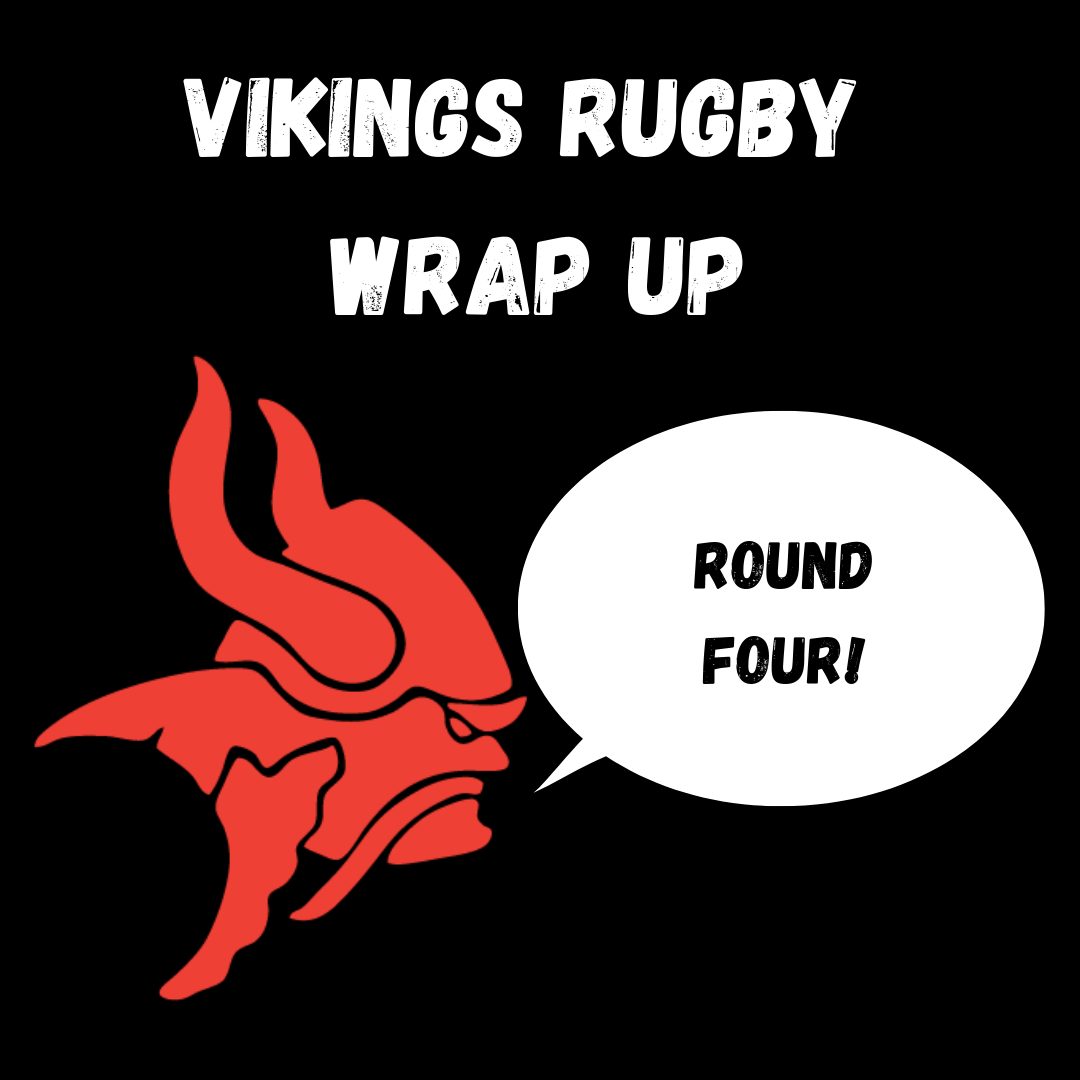 It was weather for ducks on Saturday, but the Rugby went on. The Vikings Men’s teams played at Big Splash, going 2 from 5, while the ViQueens had a nice win out at Weetangera pool. All Grades played the in-form Wests Rugby Club.

A solid weekend for our Gen Red teams, although the results didn’t quite reflect how well the Vikings played.

4th Grade had a disjointed start to the game, with several players showing up after kick off. As a result, Wests got off to a flyer, scoring 26 points in the first 10 minutes of the match. But the Vikings held their nerve, and knuckled down to respond with three tries of their own to head into halftime down 33-21. Michael ‘Chic’ Henry, spurred on by this writer’s assessment of him at Centre in his previous outing in the backs, had a fine game at Flyhalf, albeit for a botched drop punt. Charlie Jackson continued his form, too, having a clinical game at Fullback, while Jack Mac and Kaleb Dalla Costa were tough in the forwards. The second half was all Wests, who ran away with a convincing win in the wet. Still, it was a gutsy performance by 4th Grade who remain in the top 4 on the ladder. Vikings 21 – 48 Wests.

The Thirsty Thirds started under a bit of pressure, as they tried to adapt to the conditions. It didn’t take long for the rain to pick up, but just before it did, Vikings debutant Steve Sanday made a great break through the Wests defence and off-loaded to try scoring machine Tupou Lolohea, who opened the scoring for the Vikings. To their dismay, Wests would strike back with two tries of their own. The Vikings did well to maintain possession as the rain set in and made the game messy. Some sustained pressure in the Wests 22 saw Captain Matt Jolley slink over for the Vikings second try, as the boys went into the sheds down 14-12. The Vikings started well in the second half, but the conditions caused several handling errors that cost the boys some valuable points. Wests were able to capitalise and score several tries of their own, putting the game out of reach. Overall, the Thirsty Thirds put in a valiant effort, with several players having backed up from 4th Grade. Vikings 12 – 33 Wests.

The ViQueens were over at Weetangera for their game against Wests. The match, as you can imagine given it was played in a pool, was at times a debacle, however this didn’t deter the ViQueens from playing their brand of exciting footy. On Saturday it was the new players showing the older players how it’s done, with Chappy Jnr Sophie Chapman leading from the front with some dominant carries and bruising defence. Jeniah Vaana got in on the action with some solid carries herself, and Mikaela Callender continues to impress after only her second game for the ViQueens. Further, the return of Violeta Tupuola was a welcome sight and gave the girls an extra piece of inspiration to rip in. Due to the slippery ball there were plenty of scrums, which the ViQueens usually thrive in, but the weather made the set piece a dogs breakfast. Despite this, the girls played out a great team performance to get the choccys. That said, the cold and wet was too much for some, and the referee at one point stopped the game to console an unidentified ViQueen who was complaining that it was too cold for Rugby. The ViQueens are at Viking Park this Saturday against reigning champs Uni-North Owls. ViQueens 22 – 7 Wests.

This match defined the term “a game of two halves”. The Colties started quickly, scoring within the first 5 minutes to continue their strong form from the previous week. But unfortunately this was where the good play stopped in the first half, with the Vikings making some poor decisions when they had ball in hand. Still, there were signs that the Vikings could better their opposition in the wet. Bailey Goymer-Peak and Pat Maka were enormous in the Forwards, while Miguel Fernandez held his own at Fullback as the game descended into aerial ping pong. Ethan Makaua-Farani did exactly what you would want of him on a wet day, providing plenty of crash ball options from Inside Centre. The second half was a far cry from the first, the Vikings cementing their premiership credentials with a clinical display of football. Tupou Lolohea scored just after half time to get the Vikings rolling, and the points just kept coming. Patty Maka scored an impress individual try, after bulldozing his way into the Wests 22, grubbering for himself and scoring under the posts. Off the back of some excellent turn over ball and clever play, Toups was able to score the next three tries and make it 5 tries to his personal tally for the day. The highlight, however, came when Mr Excuse Danny Taupau was shifted to Scrumhalf for the first time in his short career and made a mess of a quick tap. Off the back of some great attacking options in the second half, the Colties came away with a huge win. Vikings 50 – 0 Wests.

Off the back of their dominant scrum, the Dirty Twos returned to their winning ways on the weekend. Although not a typically exciting game of footy, the Vikings were solid given the conditions, and proved they have what it takes in 2020 with a great team performance. Hall of Fame 2nd Grader Richard Joyes put the Vikings on the front foot, scoring a try after 11 minutes of play. Cooper Taekata was busy all day, although for those that have watched Cooper play this comes as no surprise. Darcy McLeod also had a strong showing, but it took a stray Wests hand to his mouth to get him sparked up. What was most pleasing was the effort put in by the bench players when they took the field. The Vikings colt aged props gave it to their older Wests counterparts at set piece time, and a sterling cameo by Khalil Waiariki-Wilson may entice him to rock up to trainings and challenge for the higher Grades. On a day where the backline was (rightly so) under utilised, the Forwards put in the work and got it done. Vikings 21 – 5 Wests.

You can imagine the state of the field by the time 1st Grade venturing on to it to face an in-form Wests side. The Vikings got off to a good start, with an Isaac Henry penalty goal in the 3rd minute of play. Wests were able to hit back quickly, answering with a try near the posts to give them the lead. Another Isaac Henry penalty goal brought the margin back to one point, but both teams were then unable to break the other, as they tried to assert their on-field dominance through tactical kicking and Forward hit ups on the rain soaked ground. Roughly ten minutes before half time, Wests crossed for a try to extend their lead to 14-6, but Sua Tonga was able to get one back after some tough runs through the Forwards, the Vikings going into the half trailing 14-13. Sua Tonga was huge again for the Vikings, as was his backrow partner Michael Oakman-Hunt. Seamus Smith has come into his own as a dominant 1st Grade player, as he controlled play superbly from Scrumhalf in the trying conditions. The second half started similarly to the first, both teams vying for field position. Wests were able to get the first try in the half, but Club Captain and son of Pat, Joe Langtry somehow found himself amongst the pigs and claimed a well worked, rolling maul try. With 20 minutes remaining, the Vikings were certainly in the thick of things as they continued to pepper the Wests line with Forward and Back hit ups. However, after maintaining possession for several plays Wests were able to crash over near the posts to take a 28 – 20 lead. One last attempt for the Red Men in the fading light to grab a bonus point fell short, with the Lions earning a well deserved victory. A gallant effort by the Vikings, who will regroup for next week’s challenge against an undefeated Uni-North outfit. Vikings 20 – 28 Wests.

Congratulations to Reece Chin, who earned his 1st Grade debut on the weekend.

That’s a wrap for Round 4. This weekend, all Grades bar the Colts are at Viking Park playing the Uni-North Owls. Stay tuned to our social media for game times! 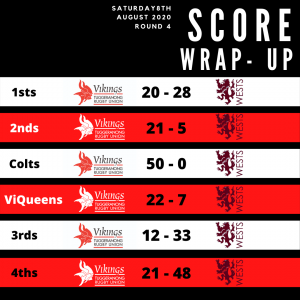