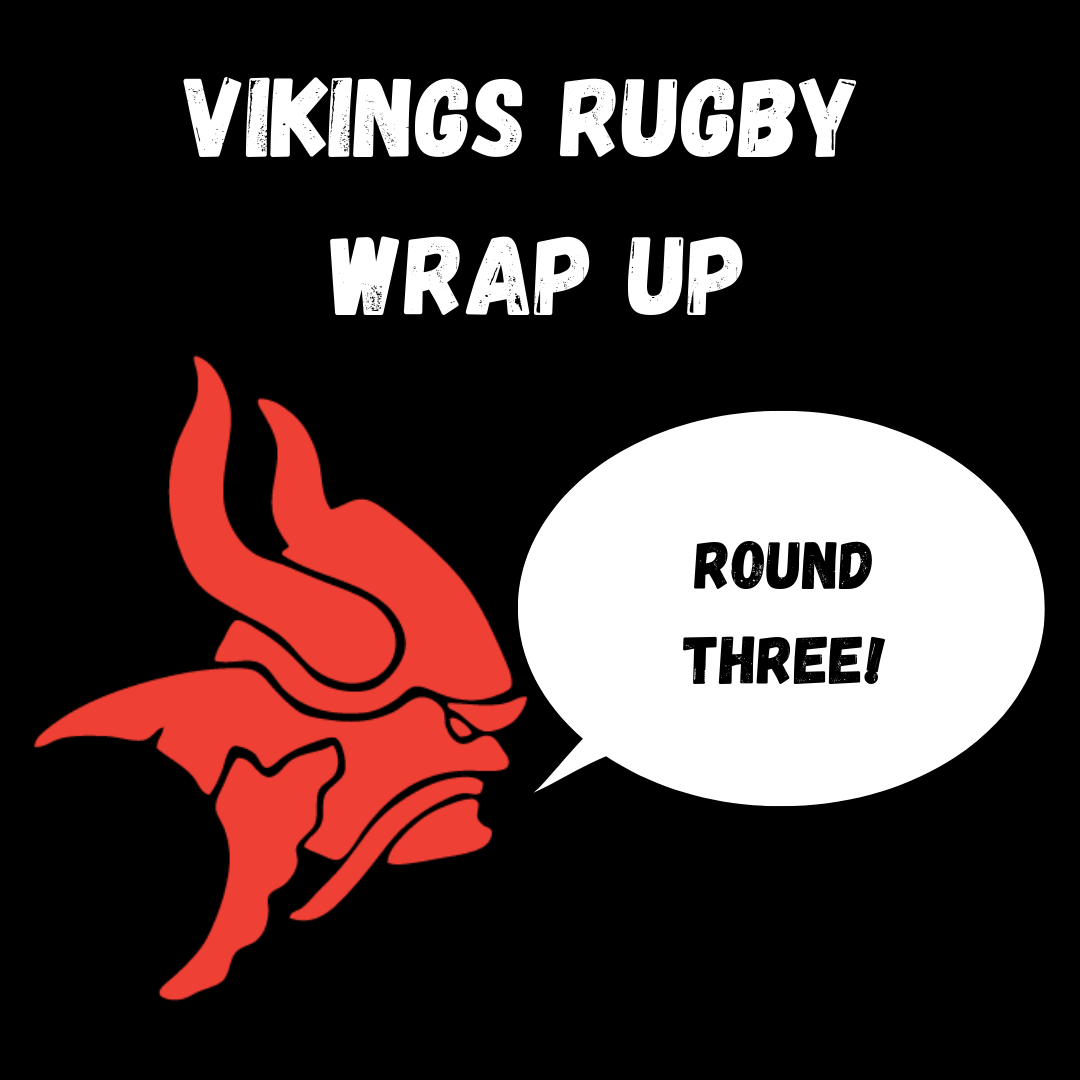 Posted at 13:00h in Uncategorized by Vikings Rugby
Share

Plenty of exciting Rugby from the weekend past, the Vikings going 3 from 6 in another largely positive weekend. The Men’s teams played the Gungahlin Eagles out at Nicholls, while the ViQueens travelled up to Goulburn to take on the Reds.

A mixed bag for the Gen Red teams over the weekend. The U18 Boys sides had a tough day at the office against Marist, while the U16 Boys played a friendly match against Bateman’s Bay, who didn’t have enough players for a full team. The U16 Girls continued their winning ways, the Red side making it 3-0 for the season.

4th Grade kicked off the day with one of their more exciting matches in recent times, going toe to toe with a strong Gungahlin outfit. It was a try fest from the get go, the Vikings and Eagles exchanging the lead constantly throughout the game. Thrown in with a couple of belters in defence, it was evident that this game would be tight. The Vikings went into half time down 15-12 with plenty to play for. Charlie Jackson, who after mounting peer-pressure decided to throw his boots on for another season, had a fantastic game at flyhalf and scored the Vikings first try. He was joined in the mid-field by Colt age Centre Danny Taupau, who was always threatening with ball in hand. With 10 minutes to go in the match, the scores were locked at 22 all. Unfortunately for the Red Men, the Eagles were able to maintain possession of the ball and march their way down field to score a heartbreaker and win the game. A great showing overall by 4th Grade, who are starting to gel together nicely with a mix of young flair and experience. A special welcome back to the 2003 U12 Grand Final Man of the Match and former NRL player Sami Sauiluma, who has returned to play a handful of games for the Vikings in between his Rugby League commitments. Vikings 22 – 29 Eagles.

After a great week at training, the Thirsty Thirds were decimated by work and personal commitments rolling into kick off. The Vikings started the game with 14 players, and not long after lost fearless leader Professor Ben Pratt to a shoulder injury. The growing pressure allowed the Eagles to score first, but the Vikings wouldn’t go down without a fight. After scrambling to get some extra bodies on the field, the Vikings put in a solid effort in the first half, putting the Eagles line out under pressure and nearly coming away with a great maul try. There was a lot of heart in the 3rd Grade performance, as several boys had already put in time in 4th Grade. Half time allowed the Vikings to catch their breath and pick up some positive chat, after having their backs against the wall. Unfortunately, however, the second half started ominously with the Eagles scoring several tries in succession to run away with the game. This wouldn’t break the Vikings resolve, and they were able to find some rhythm to their attack and barge over for a late try. Although the debate continues around who it was that actually scored the try, Khalil Waiariki-Wilson is the one listed – potentially because he was the most vocal. In the end, Gungahlin were much better prepared and the Thirsty Thirds suffered what can only be described as a character building loss. The backrow of Dan Uilelea, Callum Roles and Matt Jolley were great, as was the always reliable Owen Barker at Fullback. Vikings 7 – 78 Eagles.

The ViQueens got on the bus early to head up to Goulburn. Close friend of the team Gavin Sinclair was kind enough to offer his time to drive the girls too and from, sacrificing a couple of beers at the Gordon Hotel as a result. Thanks Gav. After a tough loss to Royals the week prior, the ViQueens didn’t waste any time righting their wrongs, putting on a clinical display of Rugby. Zali Waihape-Andrews continued her strong form with the Club, bagging another meat pie to continue her streak. Stef Stewart-Jones also had a cracker, smoking people in defence and cherry picking two tries. The ViQueens played out a superb game of footy, and off the back of some great defensive pressure were able to take away a crucial road win. Shout outs to Mikaela Callender and Kathryn Niki, who made their debuts for the ViQueens on the weekend, Mikaela also scoring a try. ViQueens 24 – 10 Goulburn.

What a week and a rev up from Trendy can do for a team. The Colties were outstanding on the weekend, putting a red hot Gungahlin pack to the sword. The Vikings set the tone quickly, with Ngarima Low scoring a double after some great continuity in attack. The Eagles were able to respond with a try after the Vikings were caught napping in defence, but this was their only sign of weakness in the match, and after a sustained period of threats from the Eagles in the Vikings 22, the Red Men were able to turn over possession and go into the half leading 12-7. The start of the second half was battled out between the 22m lines, neither team able to go through the other. After another great period of phase play, Patty Maka crossed for a try to break the deadlock and the Vikings never looked back. Patty Maka, for his part, was outstanding, using his massive frame to eat up metres and keep the Vikings on the front foot. Remsy Lemisio also found his feet in senior Rugby, having a great game at set piece and around the park. In the backs, Tupou Lolohea’s shift to the wing was a master stroke – he was dangerous with every touch of the ball. The attacking Rugby was magnificent to watch and the defence bone-rattling. The Colts put in one for the highlight reel, a fantastic game that proved that there’s a lot of talent getting around. Vikings 32 – 7 Eagles.

A game 2nd Grade would rather forget, and one they will have to move on from quickly in the shortened season. In their Grand Final rematch, the Dirty Twos were stunned after a quick start from the Eagles, who took a 21-0 lead after 15 minutes of play. Showing a lot of heart, however, the Vikings rallied and scored a try shortly after off the back of their rolling maul, which is quickly becoming a strong feature of their game. Jeremy Mututu and Nick Marshall also combined for a contender for Try of the Year. After a lovely short ball put him through a hole on the Vikings 22, Marshy galloped up field as three defenders closed in on him. Recognising some space in the back field, Marshy put a grubber through that was collected by the retreating Gunghalin Fullback. The Fullback shaped to clear the ball, but a rampaging Jeremy Mututu was able to get there in time to charge down the kick, which bounced wildly in the Gungahlin in-goal. Marshy, having regathered himself, beat out the pursuing Eagles players to touch the ball down just short of the dead ball line and close the gap, taking the boys into the sheds at 21-14. Unfortunately, not a lot else went well for the Dirty Twos following this passage of play. The Vikings just looked a little flat. No alarm bells for the boys, though – with plenty of talent in their midst, they just need to find some continuity to get them back on track. Vikings 22 – 36 Eagles.

What a game, what a finish. A lot of hype had been building from the Vikings camp for this game, after not bettering the Eagles at all in 2019. The niggle between players was fantastic, showing the fierce rivalry both teams have developed over the past few seasons. Both teams exchanged penalty goals to start the match, neither able to break the others defence. It was the Vikings who would cross for the try first, after some quick hands off set piece put point scoring machine Jed Englert over. The Vikings would be next to cross the white line, after some great attack down the left edge bamboozled the Gungahlin Fullback to put Lukey G over. The Eagles responded with a try of their own under the posts, to bring the score to 15-13 the Vikings way at half time. Michael Oakman-Hunt put in a mountain of work in the first half, as did Sua Tonga and Callum Smith who continually stuck their hands up for carries. Gungahlin took their opportunity in the second half to strike, wrestling back the momentum and scoring off a maul to take the lead 20-15. The Eagles continued to threaten the Vikings in attack, but the Red Men held their ground and were able to come away with possession on several occasions. To their frustration, the Vikings were unable to convert on several attacking opportunities as the Eagles made some crucial turnovers as the clock wound down. But cometh the hour, cometh the man. James Douglas, who has only been with the Club for 2 weeks, came on to the field and made a huge impact for the Vikings. JD forced a turn over to keep the Vikings on attack and threw superbly at line out time. With no time left on the clock, JD received the ball 5m out. He shaped to run, but at the last second threw a tip ball to a rampaging Jake Simeon who bashed through the Eagles defence to level the scores 20-20. Jack Evenden, ice running through his veins, slotted the conversion and the Vikings came away with a memorable victory. Some great heart shown by the Vikings sees them extend their record to 3 and 0 for the season, and they will look to continue this streak when they take on an in-form Wests Rugby Club this weekend. Vikings 22 – 20 Eagles.

That’s a wrap for Round 3. This weekend all Grades play Wests Rugby Club at Jamison Oval. Stay tuned to our Facebook page for announcements on crowd attendance and game times.