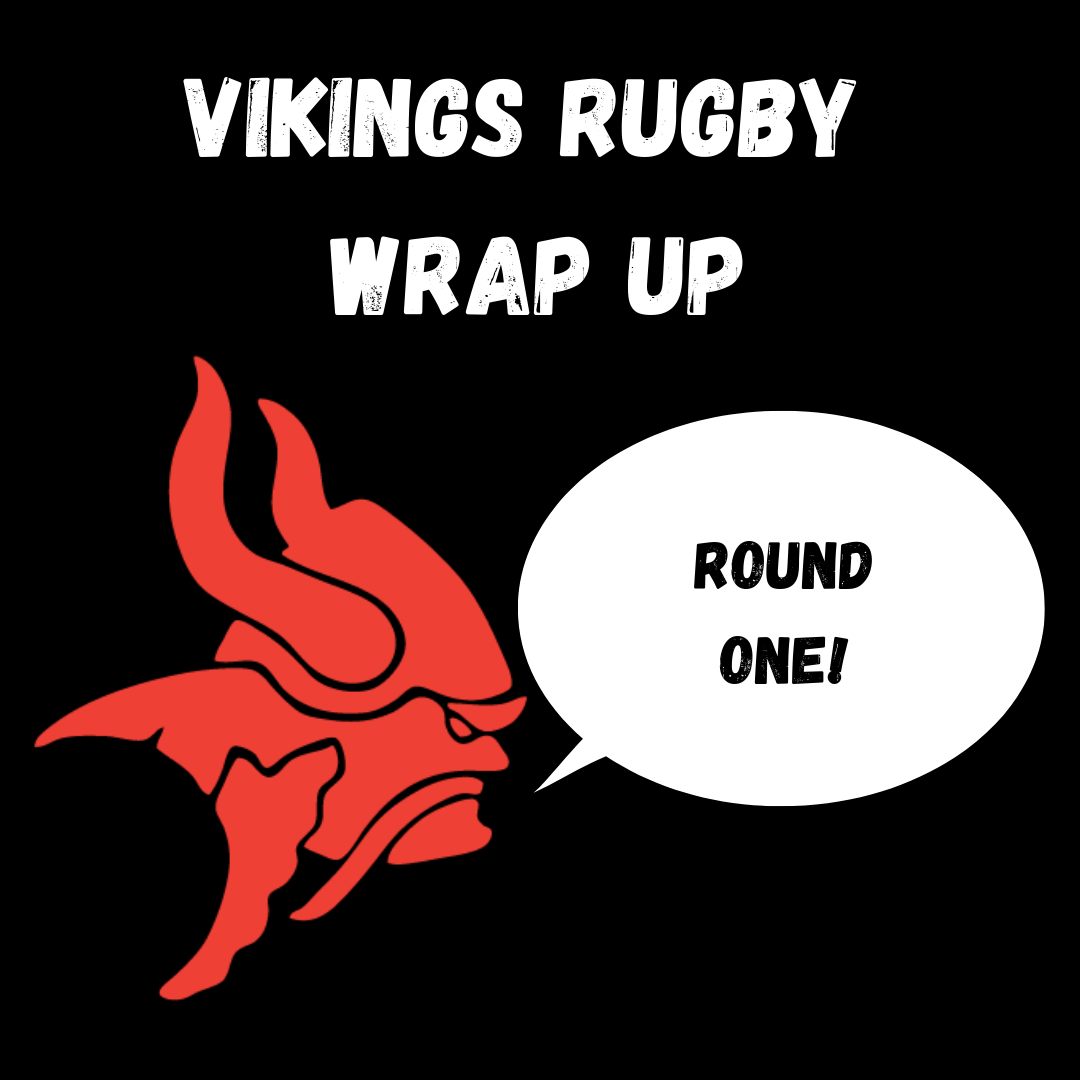 Posted at 13:32h in Uncategorized by Vikings Rugby
Share

Rugby’s finally back! The Vikings returned to structured competition play on Saturday at Viking Park. Although no crowds were admitted into the grounds, the Vikings were well supported from the surrounding car parks as they took on Queanbeyan. Overall, it was a largely positive day for the Red Men, who won 2, lost 2 and drew 1.

The Vikings new ‘Generation Red’ program, run in partnership with the Vikings Junior Club, caters for U16-U18 boys and girls. Our Gen Red players had their first matches over the weekend, too, with the following results:

4th Grade kicked off match play for 2020 on Field 2, strongly supported by several spectators who dotted the fence line. Queanbeyan got off to a flying start, their traditionally tough pack bullying the young Vikings side to go into halftime 17-0. In the second half, the Vikings fought to keep themselves in the contest, but Queanbeyan wouldn’t give up their momentum, shutting out the Vikings attack and scoring several more tries to steal victory. Michael ‘Chick’ Henry fulfilled a lifelong dream of being selected in the backline, although he still wasn’t given the prized no. 10 jersey. Newcomer Billy Phimphravichith had a blinder in his first game for the Club, the young fullback playing well above his weight, while Callum Roles enjoyed his first taste of senior Rugby with a solid outing in the back row. A tough game for 4th Grade first up, but keep an eye on this team as they get some more experience under their belts, plus some much needed match fitness. A special shout out to Nick Townsend, a die hard Whites supporter who is also a Vikings MRP player, who debuted for the Whites and kicked the final conversion of the match. Great job Nick! Vikings 0 – 40 Whites.

Although Coach Drew Gordon-Douglas was sweating on team selections throughout the week, the Thirsty Thirds debuted quite an impressive pack for their first game of 2020. The game started with some heavy defence from both teams, the Vikings looking to match the physicality of their counterparts. But it was the Whites who drew first blood, converting turn over ball into points. There was a good tussle in the first half, with both teams pressuring each other, however the Whites would score again after a line break. Although their heads were down, the Vikings were able to rally and through retained possession and great execution, proud recent father Peni Nifo scored the Vikings first points. The change in the Vikings morale was evident. But it was the Whites who would score next, after capitalising on some costly Vikings errors. Khalil Waiariki-Wilson, who had a fantastic game in his first game back with the Club in 2 years, scored just before the half to keep the Vikings within reach. The second half was an arm wrestle, not helped by the Vikings becoming their own worst enemy by bombing two tries. The Whites would score again late in the second half to seal the game, but overall, there was some “bloody good footy played” (Gordon-Douglas 2020). Cam Holt’s arch-nemesis Matt Jolley had a strong game from Flanker, as did Scotland’s answer to Rocky Will Lerche. Vikings 12 – 24 Whites.

The ViQueens drew the short straw, being allocated the Bye on the first round of competition. Michaela Leonard starred in the ViQueens bye-weekend, as she was the only player (to this writer’s knowledge) that put in extras in the Vikings gym during her time off. Several other ViQueens made the trek to Viking Park for some ‘extras’, too, however given this was for the after-match function at the Red Army you can bet that it was in no way productive to their performance on the field. The ViQueens will play their first bit of footy this coming weekend against Royals, at Viking Park.

The Colts were treated to a special jersey presentation pre-match. Christian Lealiifano, who is currently in Australia while the Japanese professional comp is on hiatus, ducked into the Colts sheds and said a few words before presenting the run-on Colts team with their jerseys. Inspired by Christian’s presence, the Vikings got off to a flying start, dominating field position and the set piece to keep the Whites at bay. Zion Going had some great little snipes around the base of the ruck, keeping the Vikings attack flowing. After building some great pressure, the Vikings crossed for the first try through Tupou Lolohea, who debuted what appears to be a signature try celebration. After a great start to the game, the Vikings lost some momentum heading into half time, allowing Queanbeyan to level the scores 7-7. The Vikings then had a scrappy start to the second half, the young side lacking some direction that will come naturally as the season progresses. Queanbeyan held the majority of field position in the second half, but the Vikings reamined strong in defence. With the score levelled at 14-14 and next to no time left on the clock, the Vikings were able to steal possession from the Whites and launch one last effort to win the game. But, in what was a good reflection of both team’s efforts, the scores remained deadlocked at the final whistle. Cooper Sullivan was a man possessed as he constantly disrupted the Whites ruck, while rugba leeg convert Ngarima Low had some nice touches on the Wing. Vikings 14 – 14 Whites.

The Dirty Twos team featured several 1st Grade calibre players, reflecting the depth of the Club in 2020 despite the current environment. The Vikings built a consistent lead after two quick scores from 2nd Grade immortal Richard Joyes and Turi Hides. Tom Hooper, who has spent the preseason training with the Brumbies extended squad had a dominant game, obviously taking his experience with both hands. This writer’s favourite current player, Reece Chin, was electric from scrumhalf, delivering quick ball for his pack and bullying the Whites defence around the ruck. The Vikings fell into a bit of complacency towards the end of the first half and the start of the second, but found their groove after Jeremy Mututu threw a contender for offload of the year to set up Tupou Lolohea, who again performed his signature try celebration. The champagne Rugby continued, the Vikings oozing confidence with their slick skills and barnstorming runs. Unfortunately the game was called off 5 minutes, after Turi Hides suffered a severe concussion that required him to be stretchered off. Turi is currently recovering from his injury and is doing fine. Although a sour way to end the match, it was a good result for 2nd Grade, who look like going a long way in 2020. Vikings 22 – 0 Whites.

Although there were no spectators present, you could feel the energy building as 1st Grade ran on the field. The Club’s mantra in 2020 is to be tough, not act tough, and that is exactly what made 1st Grade so dominant in this match. The Vikings were quick to start, scoring 12 points in 10 minutes to set the tone for the day. As you would expect from a Queanbeyan 1st Grade side, they refused to roll over and let the Vikings run away with the game, and were able to defend their line against the Vikings onslaught for a large portion of the first half. The pressure from the Vikings attack was too much, however, after Bo Abra charged over to extend the lead before halftime. The second half was more of an arm wrestle, but the Vikings were up to the challenge, gritting their teeth at the set piece to continue to pile on points. To top it off, the Vikings defence was outstanding. After a period of sustained pressure from the Queanbeyan attack in the Viking’s 22, the Red Men were able to force the turn over, pass it through the hands, grubber the ball down field and set Jed Englert up for his first try as a 1st Grader. Seamus Smith had an outstanding day from scrumhalf and epitomised the Vikings toughness. New recruits Jake Simeon (Tighthead Prop) and Isaac Henry (Inside Centre) had great debuts for the Club, as well as another rugby leeg recruit but familiar face, Andrew Robinson. An excellent start for the Vikings to John I Dent 2020. Vikings 45 – 7 Queanbeyan.

That’s a wrap for Round 1. How good is it having Rugby back! Thanks to all of our support staff for their efforts over the weekend – it was an interesting but successful day with all of the new COVID-19 compliance protocols. Stay tuned to our social media throughout the week for game times and team lists, and for further information on spectator attendance. 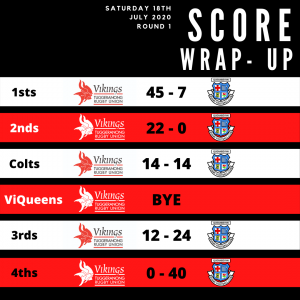