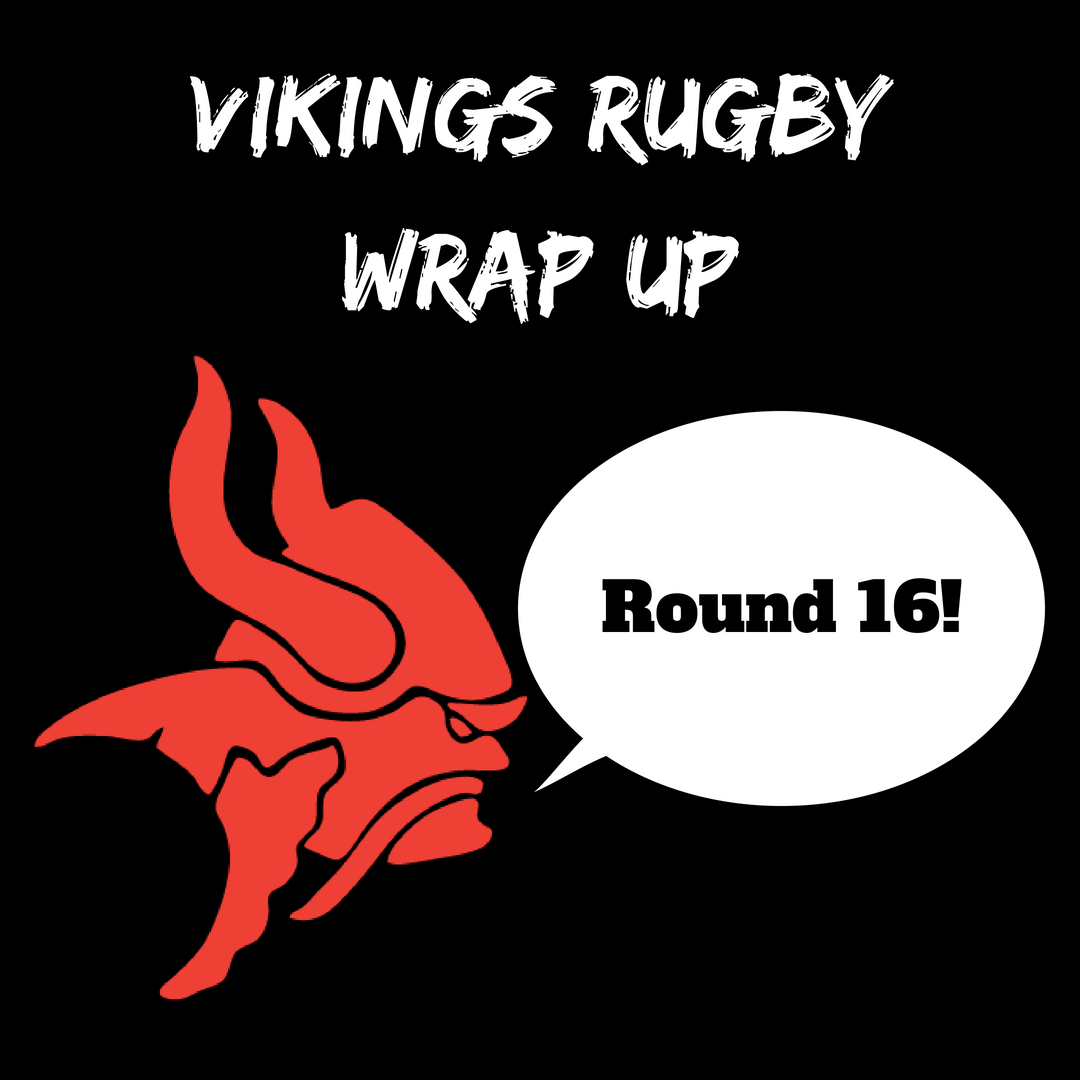 22 Jul Vikings Rugby Round 16 Wrap Up

Posted at 14:43h in Uncategorized by Vikings Rugby
Share

All Grade were back at Viking Park over the past weekend, with the Premier Grades and 1st Division facing Wests while the ViQueens took on Royals. It was also the Club’s annual Hagar’s Day, a special day for the Club that recognises all of our Old Boys and their achievements in the Red and White. For the 1st Division sides and the ViQueens, this was their last round game, as they play an extra week of finals this coming weekend. This was also the first weekend in 2019 the Club won all Grades – better late than never!

With a chance to alter their position in the finals race, 4th Grade started the match strong. As was expected from the Wests pack they came out firing, meaning that the Vikings spent most of the opening stanza weathering the storm. The Vikings would take firm control of the first half, however, scoring 4 tries for a half time lead of 24-0. Unbeknownst to Andrew Dickson, he had scored his 2500th point in the first half, an incredible achievement for a man who is showing no signs of slowing down. To give some perspective on how large Chewy’s tally is, the next closest point scorer in the Club’s history is Daisy Austin, one of the Vikings’ best who retired some years ago. Daisy’s tally sits at 1229. The second half was a little slower for 4s, many player’s realizing they would again need to back up for 3rd Grade and conserved energy. Chewy broke the deadlock at the 65th minute by kicking a penalty goal, followed by a late try to Matt French to seal the game for the Vikings. A solid performance from 4th Grade in a shut-out win. They will face the Uni-North Owls in their elimination final next weekend. Vikings 34 – 0 Wests

Unfortunately for 3rd Grade, this was to be their final game of the season, having not made the Top 6 with a shot at another Grand Final berth. None the less, the match was one of their best of the season thanks to some handy reinforcements. Michael ‘Chic’ Henry enjoyed his first ever game in 3rd Grade by appointing himself Captain and giving himself the number 12 jersey, a sensational move from his usual position of Hooker. The match was a tight tussle in the first half, both teams remaining within a score of one and other and not giving each other an inch in attack. Justice Henderson keeps going from strength to strength, having another great game at Openside Flanker. Joely Boy Morris also had a cracker, showing no signs of fatigue after having played a large portion of 4th Grade’s match. Sam Allen opened his tool box and nominated to kick the team’s conversions – going 3 from 3 and kicking a nice goal from the sideline. The second half started how the first had finished, both teams going hell for leather in what was their final game for the year. But it was the Vikings who came out on top, too strong for their counterparts. Well done to the Thirsty Thirds on grinding out a tough season. Vikings 36 – 26 Wests.

The ViQueens rounded out match play on Field 2, against old foe Royals. Spurred on by an early try to Nora ‘the Bull’ Lal, the ViQueens played fiercely and reminded the rest of the competition that they aren’t to be overlooked come finals. As is typical of a Vikings Royals encounter, the match was physically tough. The ViQueens momentum was halted to some degree after having a try by Peta Leddy disallowed, but I’m sure you knew this because there’s no doubt she has already tried to convince you that she scored. Numerous penalties and some simple ball handling errors further gave Royals the edge, capitalizing on the Vikings mistakes with a try to level the match. It was Remi Wilton who would swing the match in the ViQueens favour – having permanently labelling herself a Flanker Remi ran rings around the Royals big forward pack to dot down for a meat pie. The final points went to Ema Masi who unfortunately came off second best to a nasty head knock – hopefully it’s a speedy recovery for Ema. The ViQueens will play the Uni-North Owls in their elimination final next weekend. Vikings 17 – 7 Royals.

After a tough few weeks, the Colties returned to Viking Park looking to put a string of performances behind them and put their finals campaign back on track. The Vikings didn’t disappoint – the Colts were well composed and showed good maturity to put a solid game together. After allowing Wests in for first points of the game (this would be the only points Wests would score) the Vikings kicked into gear and put in one of their best first half performances for the year. Jack Wright had a screamer, the big Lock bringing his recent 1st Grade experience back to Colts to make a huge difference across the paddock and at set-piece. Bailey Peak, who found himself at Prop rather than his preferred Lock, also had a solid game, his work rate often undervalued for this side. Come the second half and up by several scores, the Vikings were a little rattled by the abrasive style of play on and off the ball Wests adopted. They were able to pull things back together and finish a belter of a game, giving them some momentum as they head into a redemption match against Royals next weekend. Vikings 54 – 7 Wests.

This was an up and down performance for the Dirty Twos, who had some good patches and some not so good patches. None the less, they came away with a win as they push their case for a strong run at the finals. Both teams went tit for tat in the first half, not so much from a scoring perspective, but regarding possession and field position. Spurred on by the Old Boys who had started to arrive in droves for Hagar’s Day, the Vikings went into half time with a good lead and an opportunity to improve in the second half. Richard Joyes played agelessly, earning Man of the Match plaudits and carrying the ball with a lot of energy. Seamus Smith was again the spark for the Vikings, sniping around the base of the ruck and putting his forwards over the advantage line from Scrumhalf. The second half was hard for the Vikings, as they conceded several scores to Wests to put them right back in the game. But their resolve would hold, and they were able to come away with several tries of their own to put Wests out of reach and take victory. 2nd Grade secure a Top 2 finish. Vikings 46 – 21 Wests.

This was a well polished match by the Vikings, who put Wests to the sword. From the get go the Vikings set piece was excellent, a lot of work going into their maul in recent weeks and the scrum continuing to be one of the best in the comp. The score was levelled at 7 all after 10 minutes, but the Vikings responded quickly and began to stack on the points. The Forwards were the champions of the day, making great metres off some strong ball carrying and surprisingly making some clever decisions when shifting the ball or tipping on to their support runners. A great interplay between Len Ikitau, Noah Lolesio and Andrew Robinson for a superb try helped take the Vikings into the sheds up 42 – 7, the Old Boys up at the Red Army already singing the sides praises. However, Wests were first to strike at the commencement of the second half, bringing back memories of the Vikings v Wests game earlier in the year that had been a 47 all draw. This would be Wests last score, though, the Vikings holding all the momentum and putting in a great shift. Luke Gersekowski was outstanding – unbelievably, the Chainsaw just seems to get better each week with another Man of the Match performance. The Vikings continued to pressure Wests in their 22, coming away with tries through the Forwards and showing some great composure. The Vikings now with an unbeaten streak of eight. Vikings 63 – 14 Wests.

And that’s a wrap for Round 16, the Vikings 6 from 6 on Saturday. Thanks to all the Old Boys that joined us for Hagar’s Day – we greatly appreciate your support and for all the things you have done for the Club! Stay tuned to our website and social media for game times and team lists for this Saturday’s matches. 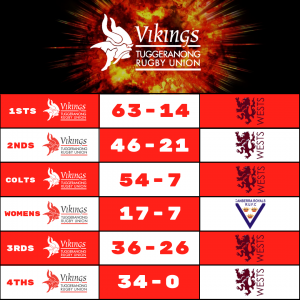