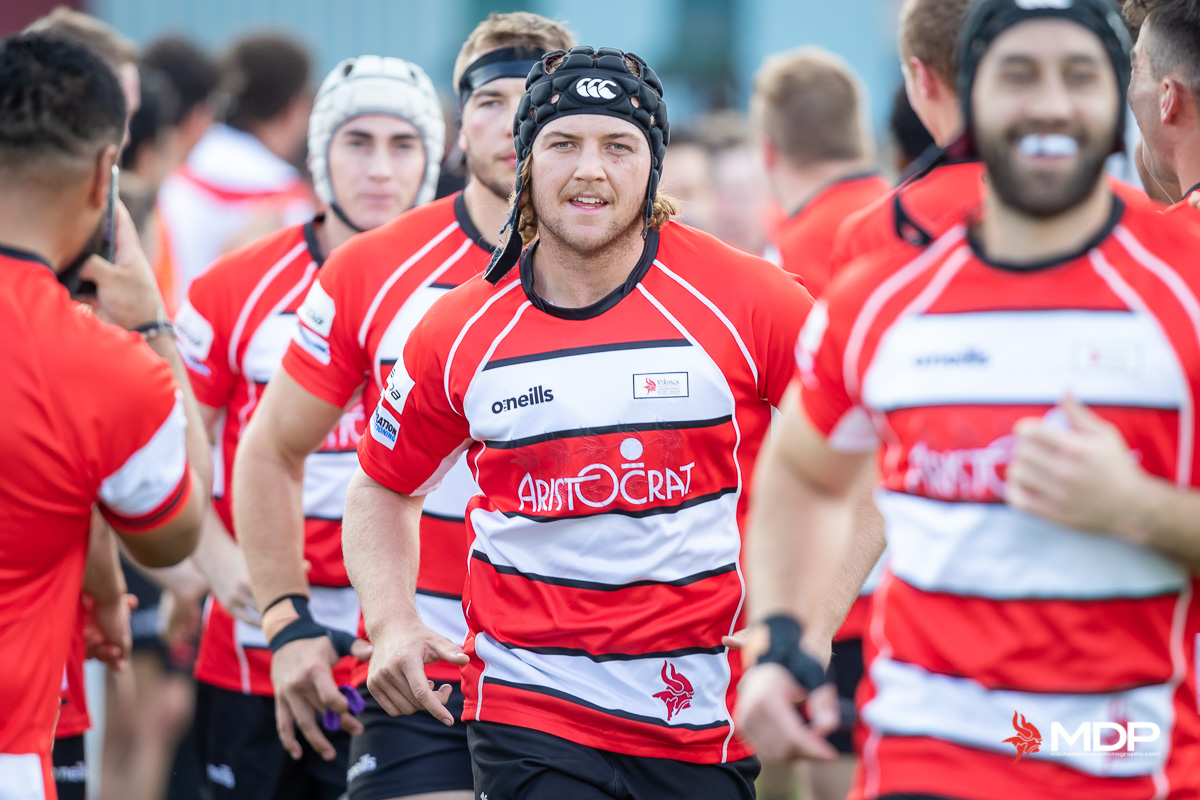 Posted at 16:35h in Uncategorized by Vikings Rugby
Share

We’ve finally reached the end of our Anniversary Series of posts! Be sure to review them all before Hagar’s Day on the 20th of July by clicking here. As a special bonus post for our Anniversary Series, John McGrath has kindly put together some words on how some of the ‘basics’ of our Club came to be – Why are we Vikings? Why Red and White? Why the Tuggeranong Valley? Take a look at the article below to find out the essentials of our Club’s history…

WHY RED & WHITE? WHY THE TUGGERANONG VALLEY?

In 1972 the idea of forming a Rugby Club came about as a result of the Northern Suburbs Rugby Club (now ANU-Norths) changing their training venue from Northbourne Oval (now the Raiders Centre of Excellence in Civic) to EPIC as it had better lighting.

Norths players Dick Heher, Stan O’Donnell, Paul Curran and myself were building houses in the just released area of Weston Creek.  Both precincts were at opposite ends of the extremities of Canberra.  We were all on the downward slide in terms of team selections with each passing year 1st Grade selection demanding more than a casual commitment.

Royals, at the time, were more or less Woden based and there were rumours that they were coveting the new are of Weston Creek.  The fierce rivalry existed between Royals and Norths and the four of us felt that long time friendships would be broken if we played for Royals.  The solution was for us to form our own social rugby club in the Creek and play in the Canberra Subbies competition. our mates at Norths would we would be neither of us felt it would be right playing for them.

The ACTRU had just separated as an affiliate of NSW Country.  The ACT encouraged us form under  an appropriate constitution, apply for approval of a playing strip and they will include us in a newly formed hybrid Canberra-ACT regional – Southern Tablelands Rugby.

Except for myself, the three others came from Newcastle.  Stan and Paul had played for Newcastle Uni whose strip was Red & White stripes (Blood and Bandages).  They were keen to adopt the same strip as it wouldn’t clash with an existing Canberra club.  I had played a few games with St George in Sydney who also played in Blood and Bandages.  And so Red and White were registered as Woden-Weston’s colours.

It’s salient to point out that the wives and partners had a very firm opinion on the colour of the shorts to be used; black is easier to wash than white.  We felt very generous and inclusive in allowing them to have some influence in the decision.  Still the registered colours for the Club remains Red & White.

THE MOVE TO THE TUGGERANONG VALLEY

1976 a number of issues caused us to consider moving over the hill to Tuggeranong, none the least being the Union itself insisting some rugby development be undertaken out there.  There was good support from the Rugby community for us to make the move.  Within the Club some thought the move was worthwhile if only to stop Royals extending their area to the three geographic areas of influence.

So, in 1977 decision was taken to move to Tuggeranong.  Obviously, there would be confusion if we retained the name Woden Weston.  A decision needed to be made on a name in a new Premiership competition and a new constitution.  Surprisingly, a shit fight started not just within our own Club on what to call ourselves but, also within the Union considered compelling us to call ourselves Souths, or Southern Districts.  Some even wanted to force on us the colours Red & Green or Black & White after Brisbane Souths Magpies.

It has to be said the wisdom and afore thought of Dick Heher and a couple of other hard heads insisted that we had to identify with the community we wished to play in.  Having won that battle, we almost became Kambah or Kambah-Wanniassa Rugby Club.  Thank goodness, based in the knowledge that expansion would eventually cross Erindale Drive, Tuggeranong Valley Rugby Club ended up the agreed new name.

The outcome was in early 1978 a new constitution under the name Tuggeranong Valley Rugby Union Football Club Inc was put to the members of the Woden-Weston Club and others interested in the new entity.

The new Club was formed and the Woden-Weston Club was legally wound up with all goods and chattels transferred to the new Club.

Subject to us playing in the ACT Premiership Competition the new Club was accepted by the ACTRU under our new constitution with the same Red & White playing strip as the old Woden Weston Club.

The new Club went on to make its own history with our first game in April 1978 in the ACT senior competition.

WHY ARE WE VIKINGS?

When the Tuggeranong Rugby Club was formed in 1978 there was no consideration as to what logo they would play under and indeed in the first year in the ACT Premiership competition we played without logo on the playing strip.

At the end of the season some players suggested a logo change and put forward a range of ideas, some  notable suggestions were Tuggeranong Tarantulas, Tuggeranong Wanders; even the Tuggeranong Terribles perhaps reflecting our first seasons performance.

Around this time a number of us used to regularly drink at the now defunct Woden Businessmens Club in Curtin.  That club, acknowledging the Viking association with the name Woden, installed a very large painting of a Viking ship with a ballooning vertical red and white sail.  The Club captain at the time Graham Fredericks came up with the idea of Tuggeranong Vikings or Valley Vikings using a depiction of a Viking boat under sail as the Club logo.

By coincidence, some of the older Woden Weston players living in Fisher/Waramanga would sometimes go on early morning runs around the back of Fisher and along Chapman Ridge.  Usually breathless we’d occasionally stop and look down into the Tuggeranong Valley.  Blanketed in fog with the hills standing out on either side, we’d occasionally observe how it looked like a fiord.  Never realising at that time the association with the feature would be made when the Vikings name was adopted a couple of years later.

Around November 1979 a former Woden Weston player, Graham Stuart returned to Canberra from Wollongong.  He had played with Wollongong Vikings whose logo was similar to the Raiders logo.  He produced a beautifully embodied purple and gold Viking logo (see the Wikipedia site for good examples of image) suggesting we adopt the Viking logo which happened to be that of NFL team, Minnesota Vikings.  The decision to do so was more or less unanimous.  Fleeting thought was even given to adopting the purple and gold colours.

That being decided, I was given the task of putting up a submission before the Licensed Club asking them to adopt the same logo as the Rugby Club.  Agreement was reached in December 1979.

A couple of postscripts to the story in some way have some relevance with Raiders Rugby League.

Some Raiders fans believe we copied the name Vikings after the Raiders came with their Viking logo.  Tuggeranong adopted it in 1979, the Raiders did not form until 1982.

Anecdotally, the story goes that when the Raiders originally formed they were going to adopt the American NFL logo of the LA Raiders which depicts a Pirate face.  The NFL had a copyright on the logo and so the Canberra Raiders opted for the current Viking logo.  This prompted in later years Duncan McMillan, the then Licensed Club CFO, to register our Viking head logo in Australia.  After some legal correspondence between the Licensed Club and the NFL I believe the outcome was that if the Club travel or play in the USA, as Vikings we are not allowed to use our Vikings logo.