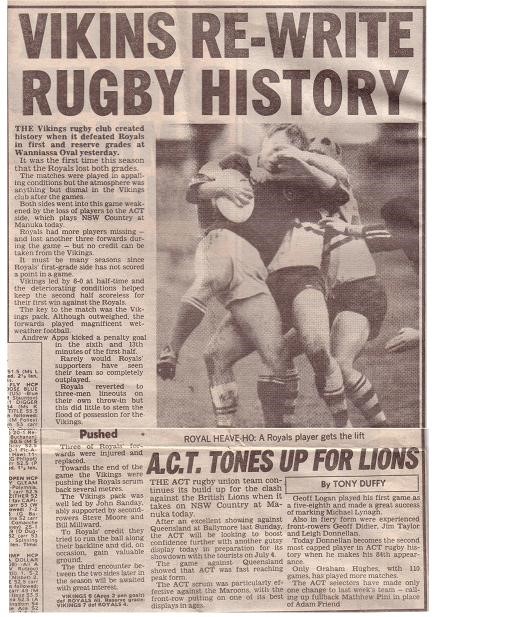 Posted at 14:28h in Uncategorized by Vikings Rugby
Share

This week, we look back to 1989, when the Club notched it’s first ever senior victories over old-foe Royals. The story here is retold by Steve Moore…

1987 and 1988 saw Royals dominate the local club scene clean sweeping all premierships in the major grades. Vikings were improving every year and had brushed the tag of “cellar dwellers” achieving a place in the 1st grade preliminary final in 1988.

It was Sunday 18 June 1989, the headlines in the Sunday Telegraph read “Vikins Re-write Rugby History” (spelling error and all).

It was a cold and bleak Saturday at Wanniassa Oval.  The old oval, without the length of the field grandstand and perfectly manicured turf.  It was raining and a southerly wind coming straight off the snow peaked mountains.  These were days when a lock had to jump to win a ball, no lifting, rucking an opponent was common, and a one on one fisty-cuffs was part of the game.

Going into the day Royals were on top of the ladder in all 4 grades yet to suffer a defeat in any grade after 8 rounds.  The Vikings, we weren’t doing too bad, 3rd in first grade, 5th in second’s, 3rd in thirds and 5th in fourth’s.  Vikings had a bit of turmoil in the camp in the lead up to the game with our experienced ACT representative lock, Gary Bush, somewhat of an on-field enforcer, being suspended during the week.  Coach Duncan Hall promoted Bill Millward (Snr) into Bushy’s spot and also decided to give young rookie, Nick Scrivener, a shot in the centres in what became a most memorable 1st grade debut.

The day started optimistically when in front of some dedicated wives and club stalwarts 4th grade went out at 11 o’clock to do their best.  Barry Murphy’s men, including players like Daniel Robey, Kenny Leggoe, Nic Stinziani and Steve Wardle, were unlucky to be beaten 11-0.  As the weather deteriorated the scoreboard didn’t improve with 3rd’s being thumped 26-0.  A young team of Daryll Adam, Dean Browne and Steven Briggs, together with the experience of Terry Crane and Peter Mewitt couldn’t match it with the Royals team.

The oval was now practically bare of grass as the 2nd’s ran out.  Old heads in the team were few and far in between apart from Dick Cordy and Graham Stripp in the front row, where else!  In a torrid affair Vikings ground it out to win a gutsy and sometimes fiery 7 points to 4.  John Matthews controlled a young back line made up of Ray Chapman, Brian Rosiak and Mick Waller while the lineout skills of Sean “Plugger” Blackmore were invaluable.  Tuggeranong’s first senior win over Royals……ever.  Coach of the team, Reg Apps, wrote in his season report for the annual report: “who remembers the second person to climb Mt Everest”, a comment still used to this day by the players in that team.

In 1st’s after losing to Royals in round 1 then winning four of our next seven we thought we might be a chance, even without Gary Bush (suspended).  Duncan Hall, at his first year with the club, had us primed and ready to go.  Oblivious of the jubilation that had happened just minutes before, the 1st’s ran out onto the rain soaked and churned up field behind skipper Geoff Apps.

The white jerseys of the forwards didn’t take long to become brown as the Wanniassa Oval turned into an absolute mud bath.  Just 6 minutes into the game the sharp boot of Andrew Apps slotted over a penalty goal.  Minutes later it was repeated and the Viking’s led 6 points to nil after only 13 minutes.  From then on the Tuggeranong back line saw little ball but tackled their hearts out as the stylish Clark, Quinn and Maguire of Royals came at them at every opportunity, but to no avail.

At half time, with rain coming down in bucket loads, Duncan grouped us closely together, giving us the call about making history, about knocking off the team we loved to hate.  A few more expletives were used and we got the message.  He then took the skipper and George Whatman, halfback, aside and had a few quite words.  What he said would become evident by the end of the day.

The second half saw the rain continue and the wind change direction, as so often the case at the old Wanniassa Oval.  We were running to the Erindale end, into the wind.  Royals restarted play with an attempted deep kick, but the dour conditions saw it travel only 20 metres, straight to George.  ‘Kick’ the ball dribbles over the touchline our side of halfway about 10 metres out.  Lineout to Royals.  While out weighed by the Royals pack the Vikings had the tall timber of John Sanday, Steve Moore, Bill Millward and Dave Paull.  Royals had no hope of winning the line out.  The ball thrown in, Vikings get possession, and Whatman, ‘kick’ the ball dribbles out another 10 metres up the paddock.

The scene continued as we made our way up the field.  As Royals won, or Tuggies lost, the occasional lineout the Royals back line would throw it wide and regain the lost ground.  As soon as there was a turnover, ‘kick’, lineout, Tuggies win possession.  “Royals reverted to three-man lineouts on their own throw-in but this did little to stem the flood of possession for the Vikings” (Sunday Telegraph).

With our heads up the Vikings forwards dominated with youthful flakers of Tony Kelly and Dave Paull showing the old heads of Royals, Graham Reed and Michael Roche, how to play the breakdown.  The backs saw no ball that half with either Whatman or Geoff Apps kicking for touch, sometimes for a one-metre gain.  “The key to the match was the Vikings pack.  Although outweighed, the forwards played magnificent wet-weather football” (Sunday Telegraph).

A win against the then mighty Royals in 1st’s and 2nd’s.  The start of something big.

The write up in the Rugby News (the weekend program) the following week, usually ½ a page in length for each club, read:

Question:  What is the definition of ‘Cheerful’?