Vikings Rugby Round 12 Wrap Up 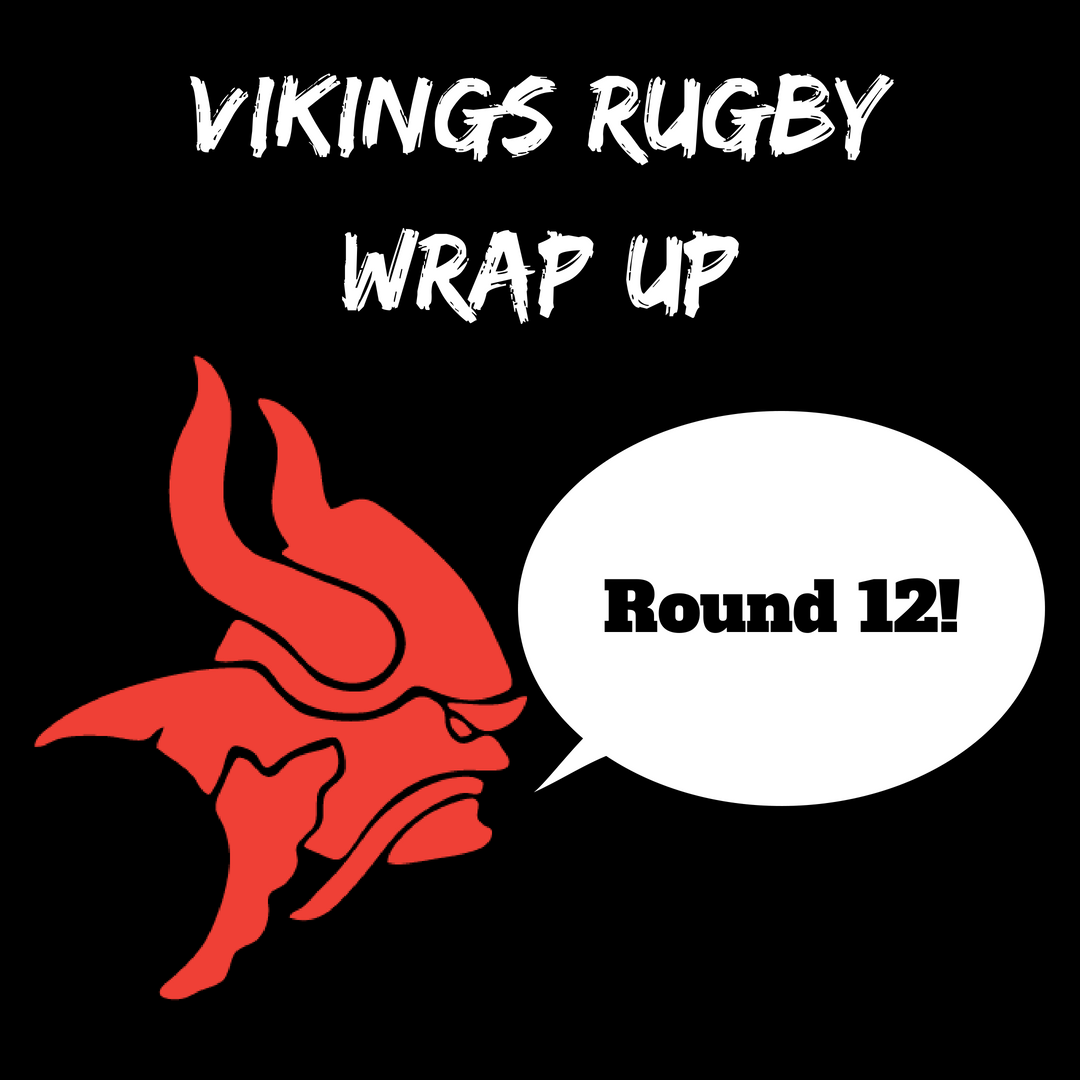 24 Jun Vikings Rugby Round 12 Wrap Up

Posted at 13:54h in Uncategorized by Vikings Rugby
Share

A mixed bag for the Vikings over the weekend, going 3 from 5 out at Campese Oval against Queanbeyan. There was some good footy played by both sides, both teams in need of wins in all Grades as the finals draw closer.

The MRP is now in its second last week, almost drawing to a close the Vikings’ inaugural season. It was a frosty start at Viking Park but the Rugby played was red-hot – Hayden was the stand out in the first half of the match, dotting down for a hat-trick of tries after some impressive footwork. Big Nick Townsend had a couple of lengthy line breaks to set up some cracking tries, and to the delight of Coach Pratt kept his kicking to a minimum. Lillie was again at her best, showing an unexpected turn of pace to bag several tries of her own but the performer of the day was Little Nick, who after spitting the dummy early in the match returned for a frightening display of Rugby, proving composure is the key to success. The MRP returns next week for their last match of the season. Be sure to head down to Viking Park from 9:00am to cheer the kids on!

4th Grade kicked of proceeding at Campese Oval, running out to face a formidable Queanbeyan pack. The match was high-scoring punctuated by some huge momentum swings. The Whites had the wood on the Vikings early, scoring two quick tries before the Vikings struck back and took the lead midway through the first half. The lead wouldn’t last long, however, the Vikings going into the break behind 31-12. The Vikings wouldn’t die wondering, hitting back early in the second half through fleet footed Italian Freddie Pitasi, who ghosted seven or eight Queanbeyan defenders to go over untouched. The momentum continued to change all through the second half, due mainly to the fact that defence was optional for both teams. The Vikings would score and convert through the boot of Chewy to bring the score to 40-45 with less than a minute to go, but they would fall agonizingly short of victory after a knock on that ended the game. A strong game by 4th Grade, led by the ever impressive Justice Henderson, as well as some influential moments by dynamic duo Chew and Shaw. A special mention to Singapore Tour hero Shane Dewar for his cameo in the match – we hope another cap with the Vikings covers that bill at the Cricket Club from last year. Vikings 40 – 45 Whites.

For as many weeks in a row, 3rd Grade were once again supplemented by several dedicated 4th Graders who doubled up. A massive thanks to the players that stick around and play both matches, your support doesn’t go unnoticed and we greatly appreciate your dedication to the Club and to your coaches. It was a solid game for 3rd Grade, who continued their form from the week previous with another great display of Rugby. Bryce Taotua had another impressive game at Flyhalf, displaying some sharp skills with ball in hand. Andrew Talaina ran strongly and led with purpose, while Goon Bag Ben Gillespie continues to prove himself as one of the most underrated players at the Club. The scores were locked at 14 all mid way through the second half, both teams unable to capitalize in the other’s 22. But it was the Vikings who would eventually break away, scoring a try that would open the flood gates and have the Vikings close out the match as convincing winners. 3rd Grade on a hot-streak. Vikings 31 – 21 Whites.

This was a game that went begging for the Colts, who were perhaps overawed by the environment of a Queanbeyan Old Boys day. The Vikings started off strong, scoring within minutes of kick off and keeping Queanbeyan on the back foot with some good attacking Rugby. The side flashed some of the brilliance they has made them near unbeatable in 2019, but Saturday was a frustrating day for the Colts, who had a mix of good and bad patches.  With the Vikings leading by a narrow margin after half-time, Queanbeyan were able to close the gap and slowly edge ahead. The Whites were able to hold on to momentum and finish the match victorious. Reece Chin, although suffering a nasty ankle injury, had a great game at halfback. John Madjaga was whacking blokes all over the field, and Alex Punou was again solid at Hooker. Unfortunately, it wasn’t enough for the Vikings. A big match this coming week against Gungahlin. Vikings 19 – 27 Whites.

The Dirty Twos went into the match having not won at Campese for quite some time. The Vikings wasted no time trying to correct this stat, peppering the Queanbeyan defence with some brilliant attacking Rugby. Max Ravouvou was the beneficiary, scoring three tries in the first half.  The forwards were clinical around the park, bashing their opponents to work the pack up field. Tom Watego had a barnstorming game from Flanker, while Michael Henry was at his silky best, throwing several show-and-go’s and leading the forward pack from the front. Man of the Match Blake Henman was outstanding – finding himself at Fullback, Blake had a stellar game with a number of try assists, brilliant counter attacking and a meat pie of his own. The Vikings went into the sheds up by 20 odd, relishing the opportunity to win at Campese. But Queanbeyan wouldn’t let the Vikings take it easily. The Whites came out firing, holding on to possession and taking away points. The Vikings slumped a little in the second half, giving further advantage to the Whites, who were able draw the match back and eventually take the lead. But a sneaky try to Henman (who had since moved to Scrumhalf) bumped the score to 29-26 with less than 5 to go. With time elapsed and a line out in the Vikings 22, Queanbeyan had an opportunity to steal victory and continue the unbeaten streak at home. But thanks to some excellent mauling by Rhys Griffiths, the Vikings turned the ball over and finally got one over their Grand Final opponents of the last 5 years. Vikings 29 – 26 Queanbeyan.

Heading into the match on a 4-game winning streak, the Vikings wasted no time in continuing their hot form, scoring within minutes of kick off after a nice break along the left wing. It was a solid outing for the forwards on Saturday particularly – almost a traditional 1 to 10 match that, as you can imagine, was a very bruising encounter. Props Sione Taula and Angus Wagner continue to terrorize opposition scrums and pair up well across the field – Sione axing people in defence and Wags a constant threat at the breakdown. Backrow partners Luke Gersekowski and Angus Allen were again in fine form, the two boys getting through a mountain of work on both sides of the ball. The Vikings utilized their set piece and maul effectively, drawing in Queanbeyan numbers and then releasing the ball to the likes of Dean Wilson and Len Ikitau to play with. Ryan Lonergan is playing like a Macdougall Medallist – already one of the top point and try scorers in the competition, Loners is firmly pressing his case to be a regular match-day Brumby. The Vikings capped off a successful day at Campese with a win. Now on a 5 game hot streak, they face an in-form Gungahlin pack who will want to keep their advantage over the Vikings in 2019. Vikings 37 – 28 Whites.

That’s a wrap for Round 12 – next weekend, the Premier Grades are out at Nicholls Oval taking on Gungahlin, 1st Division are on the bus to Cooma and the ViQueens head over to Weetangera Oval to play Wests. Stay tuned to our website and social media for game times! 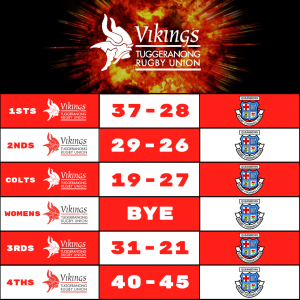