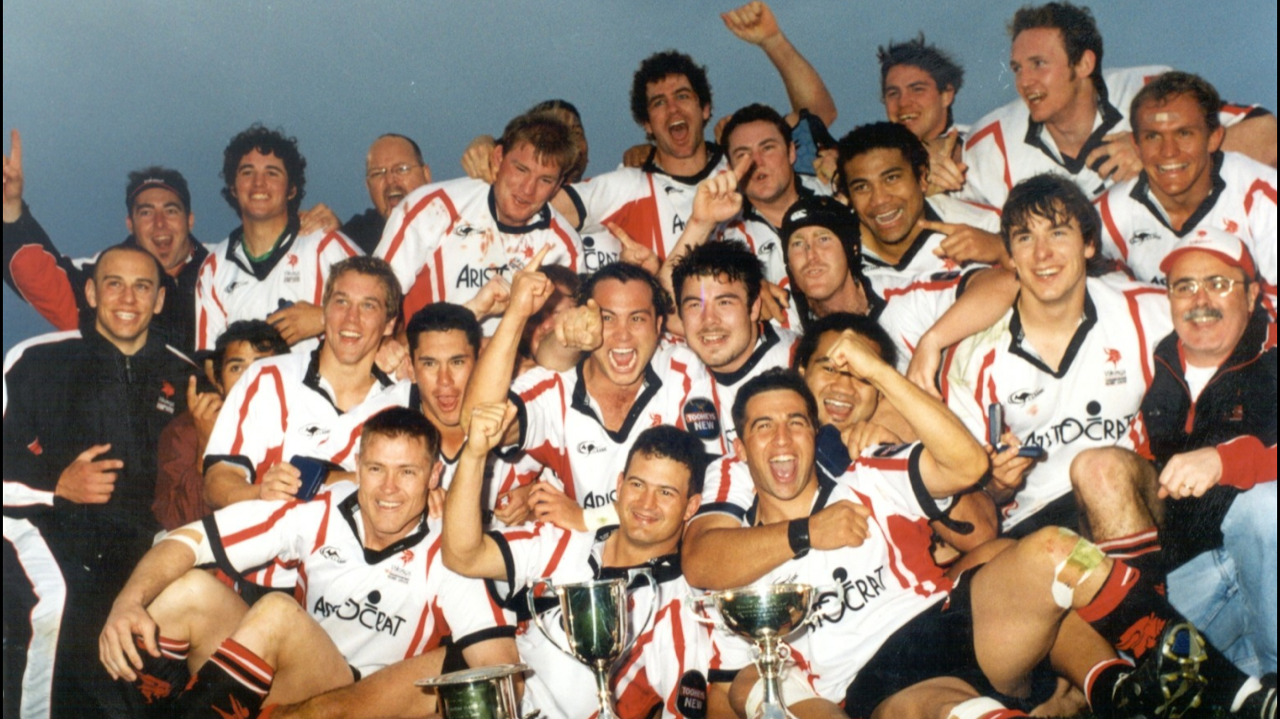 Posted at 02:22h in Uncategorized by Vikings Rugby
Share

Ahead of this weekend’s match against the Gungahlin Eagles, we look back on our 1st Grade Grand Final victory against the same opponent in 2004, as retold by Club President Brendan ‘Trendy’ Allardyce…

The 2004 season promised new hope. Vikings had not won the John I Dent since 1999 and so after 4 seasons of near misses, the 2004 cohort came together with a steely determination to bring back Johnny.

A thorn in that ambition was Mr. Tuggeranong, Baden Stephenson slipping into retirement following the 2003 near miss but the silver lining was the emergence of his great mate Michael Aggy Agius to take over as the team’s stalwart and leader. Some modifications to the coaching structure saw Brendan Trendy Allardyce appointed as the 1st Grade head coach, working closely with Graham Reed, Pat Langtry and Max Crozier.

The first round saw a home defeat to reigning premiers Gungahlin 34-15 and the squad knew then there was plenty of work to do and a mountain to climb. In a marathon 21 round 18 game season, there was the opportunity to build and develop the squad. 11 rounds without a loss placed the team on top of the ladder and after Round 1, other than a 1-point loss to Royals and a draw with Wests, the 1st Grade squad finished the minor rounds with 15 wins, 2 losses and 1 draw to be claimed minor premiers. Significantly our 2nd Grade went through the minor rounds undefeated to provide the depth and support needed for finals.

A tough 25-20 win over a Wallaby Stephen Larkham inspired Wests in the major semi-final, provided a Grand Final place and a crack at breaking the drought. Gungahlin had finished the season 3rd but with great momentum and it was unsurprising that they steamrolled Wests to be our Grand Final opponent.

Against a strong wind, the Redmen kept the ball tight and dominated the close exchanges to edge every metre and see superstar lock Graeme Sangers McIntosh crash over for two first half tries. Season Best & Fairest and team workhorse, Martyn O’Brien had already played 2nd Grade yet manfully entered the fray after only 10 minutes when Player of the Year Jacob Thornton hobbled off with injury. Marty’s leadership and the physicality of the pack, including Brett Naylor (who had returned from spending10 min in the bin for tutoring the Gungahlin fly half in some boxing tips), Paul Spud Kelly, Ben White and Marlon Solofuti was too much for Gungahlin in that first half.

In the second half, the Vikings backs took over, Captain Aggy in his 100th game serviced a backline of playmakers in Bob Smethills trophy winner, fly half Beau Dunley. Mark Armstrong and the human metronome Emile Wessels (kicking 9 from 9), the outstanding back three of Tim Cuzz Curran, Smokin Joe Mathews and Peter Pistol Conroy finished superbly. The bench provided great impact and players like Duane Peterson, Keane Wheeler, Beau Mokotupu and Omar Ramsden helped see out a momentous win.

Final score 33-13 and Johnny was back. Over the season over 40 players had pulled on a first-grade jumper ranging from 10-year veterans, fully professional players and young Colts. By any metric the team was the best of the season and were lauded as the drought breakers.

Highlights of the 2004 season:

Player of the Year – Jacob Thornton

Rookie of the Year – Julian Salvi

Clubman of the Year – Sean Blackmore