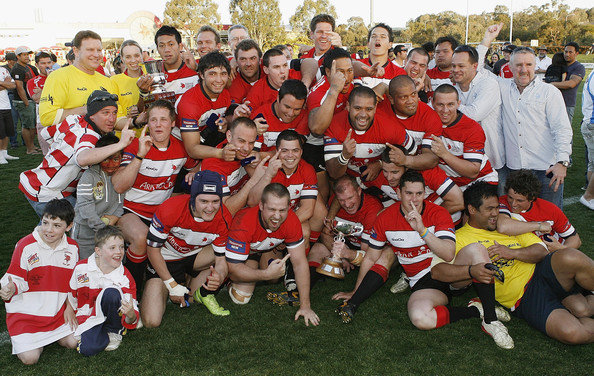 Posted at 12:45h in Uncategorized by Vikings Rugby
Share

Ahead of this weekend’s clash with the Queanbeyan Whites, we look back on the most recent of these milestones, our memorable after the siren victory over the same opponent in the 2009 Grand Final…

View the highlights of the game by clicking here.

The 2009 season saw the club facing a rebuild after failing to make the first grade finals series for the first time since 1993 in 2008. New coach Glen Chistini came across from 2 time premiers Queanbeyan, taking a fairly green touring party on a winning three game pre-season trip to New Zealand to kick-start the season. Despite victory in the pre-season Transact Shield the side endured an up and down regular season, failing to achieve a single victory over eventual major semi-finalists Royals and Queanbeyan.

The side included a number of players who would feature heavily for the club over the following years which saw them appear in every grand final from 2009 until 2016, including stalwart and the year’s Macdougal Medallist Beau Mokotupu and younger talent such as Sione Taula, Jake Knight and Colby Faingaa. The mid-season recruitment of tight head Mike Noble also proved to be a massive coup for the club on and off field, while the return from Brumbies duties of emerging superstar Christian Lealiifano added a serious touch of class with the finals approaching.

A 32-3 romp over Wests in the minor semi-final paved the way for a preliminary final with old foe Royals, who had enjoyed a dominant season with only one loss. Unfortunately for them a Lealiifano masterclass and a complete performance from the red men overwhelmed the bluebaggers 42-21 in what was easily the team’s best display of the season. With Queanbeyan looking for their third consecutive title everything pointed to a classic grand final.

The below match report from Coach Glen Christini confirms that the match was to live up to its billing:

What a day, what a contest.  Nothing better in rugby than a packed out Viking Park on Grand Final day with two groups of passionate fans baying for blood.  This game certainly had all the drama and action you could possibly hope for.

Vikings jumped out to a commanding 10-0 early lead and looked in control of the contest before all hell broke loose, with a gentle push and shove escalating to an all-in brawl in a blink of an eye.  Ed Stubbs and his Queanbeyan dancing partner were both issued yellow cards for their part in starting the affair, and rather than being rewarded for a sharp 40mtr sprint, powerful prop Sione Taula was shown a red card for running so far to join the party. Sione, although disappointed with being sent off, still had the courage to wave in appreciation of the Queanbeyan supporters.  Vikings were now playing with 13 for 10 minutes and 14 for the remainder of the contest.

The numerical advantage clearly brought Queanbeyan back into the contest and frustrated the Red men – with Queanbeyan in control half time rolled around. Even in the comforting surroundings of our changing shed chaos was the flavour of the moment with Tim Curran choosing this moment to test the integrity of the wall lining.  With calming (and brilliant) words from the coach, and some input from captain Marty O’Brien, along with Mikey Noble informing everyone he would hold the right hand side of the scrum up all by himself, the team headed out for the second half.

The game became hectic: heavyweight winger Jake Knight provided a try, and the lead changed several times.  The boot of Christian Lealiifano gave Vikings a narrow lead heading into the final few minutes of the contest.  At this point Beau Mokotupu became a central figure in the match. From a kick off following a field goal from Christian which put Vikings in the lead Beau decided his kicking game should come into the contest, promptly getting charged down and handing possession to Queanbeyan. The Whites attacked with everything they had and scored a converted try to seal the Grand Final win, or so most people thought.

One last hectic minute was about to play out as a Queanbeyan kick provided Vikings with one last possession and 14 very tired men set about trying to make something happen.  Only a converted try would win the game, unconverted would give us extra time, a prospect 14 tired bodies could not entertain.  A couple of penalties helped Vikings keep possession and some strong ball carries took Vikings near the Queanbeyan line at their supporters end (what better place).

With time well and truly up, and a ruck close to the Queanbeyan line Mokotupu, not at all put off by his kicking game providing Queanbeyan with their final try, thought this an excellent moment in time to try a move never before unleashed in a game, which of course involved him kicking the ball.  Beau will claim to this day he knew we had an advantage so would get the ball back anyway, but in what appeared to be very slow motion, he decided to attempt a deft pop kick over the Queanbeyan defensive line.  Now, as if by fate (what else would possibly happen) the kick was charged down (at least partially) by the defensive line.  The ball, rather than dying quietly popped into the air in the in goal area.  The fast chasing Tim Curran, a very athletic individual, rose above the surrounding Queanbeyan players to claim the ball and ground it under all the bodies, it was an amazing moment to see the referee award a try.  From the coaches box I had just experienced the full range of emotions inside 30 seconds.  More chaos ensued as players celebrated the try and the crowd was full of joy.  It seemed like everyone forgot that we still needed a conversion to win the Grand Final.  Luckily Christian, who would be named man of the match for his superb all-round display, was able to calmly slot a handy conversion to give Vikings the win.

A Grand Final for the ages, it had everything from start to finish.  Two very good teams playing with determination for their Clubs.  What it had above all else however, was a very courageous group of men wearing Red.  Truly a game for the Club to be proud of, and definitely a group of men for the Club to be proud of.  They had no right to stay in the contest, let alone win it, with what they had to deal with that day.  The fact that they found a way to do both is something that will live forever in the highest echelon of memories.  THANKYOU