Vikings Rugby Round 2 Wrap Up 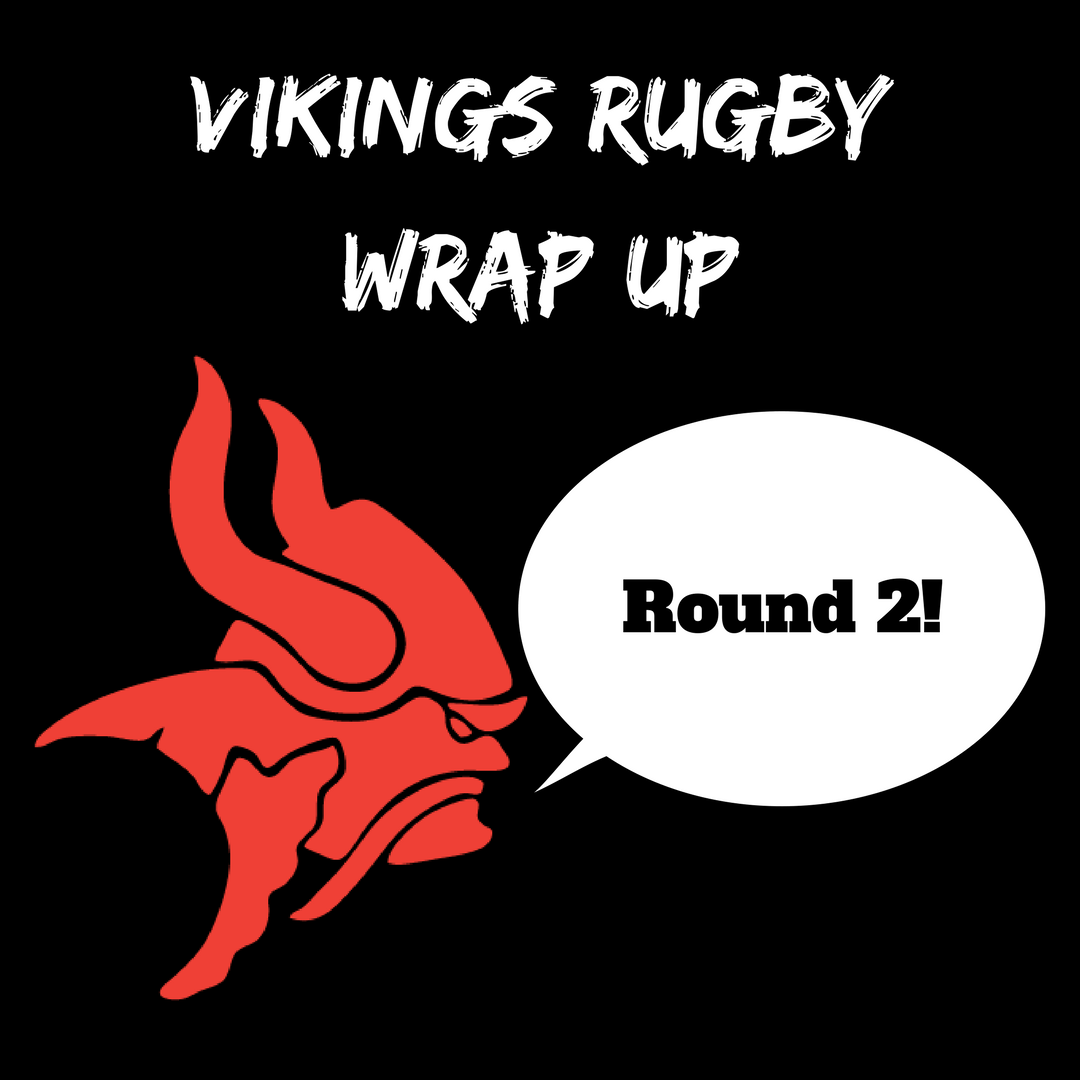 08 Apr Vikings Rugby Round 2 Wrap Up

Another mixed afternoon for the Vikings, who had games in Jamison (Premier Grades) and Goulburn (1st Division). It was an absolutely scorcher of a day and as you will see from our Match Reports, the Rugby was equally as hot, with plenty of points scored and in the case of 1st Grade there were some thrilling results.

4th Grade were on the bus out to Goulburn and opened the account for the 1st Division sides. Despite the bus arriving at the ground at 1:45pm, 15 minutes prior to kick off, 4s started quickly, racing out to a first half lead of 24-0. The backrow of Nui Tivalu, Siaosi Fakalolo and Mase Duggan were outstanding, providing excellent front foot ball for the backline to capitalize on. Niall Jacobson had a Man of the Match performance from Inside Centre – even more impressive due to the fact this is only his second game of Rugby ever. The experienced front row of Geoff Adam and Ryan Slater, who have close to 500 Vikings games between them set the platform at scrum time and, thanks to the boot of Slats, kept the scoreboard ticking over, too. Unfortunately, the heat seemed to burn 4s out of the game, the second half revealing 4s weak underbelly of a lack of fitness and available bench players, with Goulburn running in 33 unanswered points to win the match. As Nic Murray ran out for his 100th game for 1st Grade this weekend, Tom Carney earnt his 100th yellow card, almost receiving a red in the process for back chat. A lot of promise for 4s but a lot to work on, 33-24 to Goulburn.

A disappointing game of Rugby for 3rd Grade, who weren’t able to fire a shot on Saturday. American flyer Fotofili Namoa touched down for his first try for the Club and 3s only meat pie of the match, as Goulburn ran in 59 points against quite a solid 3rd Grade line up. Ben Gillespie continues to prove himself in the Vikings senior ranks, having a Man of the Match performance at Prop. Andrew Talaina also had another industrious game at No. 8 and Stef Stewart-Jones, who if you haven’t heard played for the Brumbies Super W team, was outstanding running water for the boys while the ViQueens had the bye. Unfortunately not a lot more to say for the 3rd Grade game, a disappointing result that this young side will learn from, 59-7. Kaleb Dalla Costa from all reports was voted best on ground on the bus trip home.

A good win for the Colties, although there were a lot of points left on the table. In the first match of the day at Jamison Oval, the Colts found themselves in an arm wrestle early with Wests. Some basic errors while on attack hindered the Colts from posting a bigger score in the first half, but the chat from Coach Kydd at half time was positive, steering his young side back on track to play a much more polished second half. Jed Englert continues to impress since his arrival in Canberra, looking very much at home at Fullback with several probing runs and some solid defence. Billy Carberry was his usual best, scoring 14 points for the day and Harper Kemp, who came to Canberra a prop, had a barnstorming game at Blindside Flanker. As the Colts continue to find their feet in the early stages of the season, we are due to see them knock teams out of the park – the 2019 Colts class have a lot of potential and will be sure to be a competition front runner should they continue on their path. Vikings 24 – 5 Wests.

Much the same as Colts, 2nd Grade had a relatively slow start to the game with a sleepy first half performance. There was a lot of positives to the Dirty 2’s attack, as they put themselves in good field position to take away points, but they just weren’t able to convert. The second half was much improved, the Vikings finally breaking away from their tussle with Wests to start piling up the points and set up victory. The ruck work by the Vikings was outstanding – Dan Uilelea had a field day at the breakdown, with several crucial pilfers while Wests were building momentum. Richard Joyes was again his busy self, the ageless No. 8 carrying with gusto and guiding the forward pack around to get the job done. Jayden Macken once again hit double figures, scoring 13 points and enjoying his time back at Fullback. With the starting pack finding their groove, the substitute players joined in on the fun and helped close out a decent win for 2nd Grade, 33-21.

What an absolute whirlwind of a game for 1st Grade – an instant classic for anyone who was at Jamison Oval on Saturday or watching from home. It started with Nic Murray running out for his 100th game for the Club, a feat few players achieve. Congratulations Nic on an awesome achievement. The first half proved that the Vikings were in for a close encounter, both teams going tit-for-tat for tries. The relatively young Vikings forward pack, which also featured 100 gamers Sione Taula and Michael Henry held their own against an experienced Wests side in the first half, Angus Wagner leading the way after a full preseason with the Brumbies. The first half saw Wests ahead, 21-19. Coach Scrivener encouraged his side to stay in the fight and to minimize their errors, but no one could have predicted that the second half would play out the way it did. Led by Brumbies Tom Wright and Chance Peni, Wests were hot in attack, as they fell into a cycle of retrieving possession, making a line break and scoring a try. The Vikings struggled to gain the advantage line beyond the 50m and their set piece, which had been solid in the first half, began to deteriorate against a big Wests forward pack. You would excuse most people for writing the Vikings off with 10 minutes to go, facing a scoreline of 47-19. Cue one of the most incredible comebacks this writer has ever witnessed. The Vikings finally began to click into gear, scoring some energetic tries from inside their own half to begin narrowing the gap. With the game on the line at 47-38 and needing a conversion to bring the game within one try, Ryan Lonergan quickly nudged a drop kick over to bring the score to 47-40. The Vikings were hot on attack again, working their way down field to score a try just shy of the posts, Lonergan converting to send the game and those watching into madness. After some sustained pressure, Wests were able to holt the Vikings incredible comeback and close the game out a draw, 47-47. Never say never!

That’s a wrap for a wild Round 2 for the Vikings. This weekend, our Premier Grade sides have a Bye while 1st Division take on ADFA/RMC at Viking Park. Stay tuned for game times! 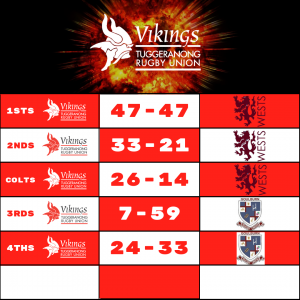