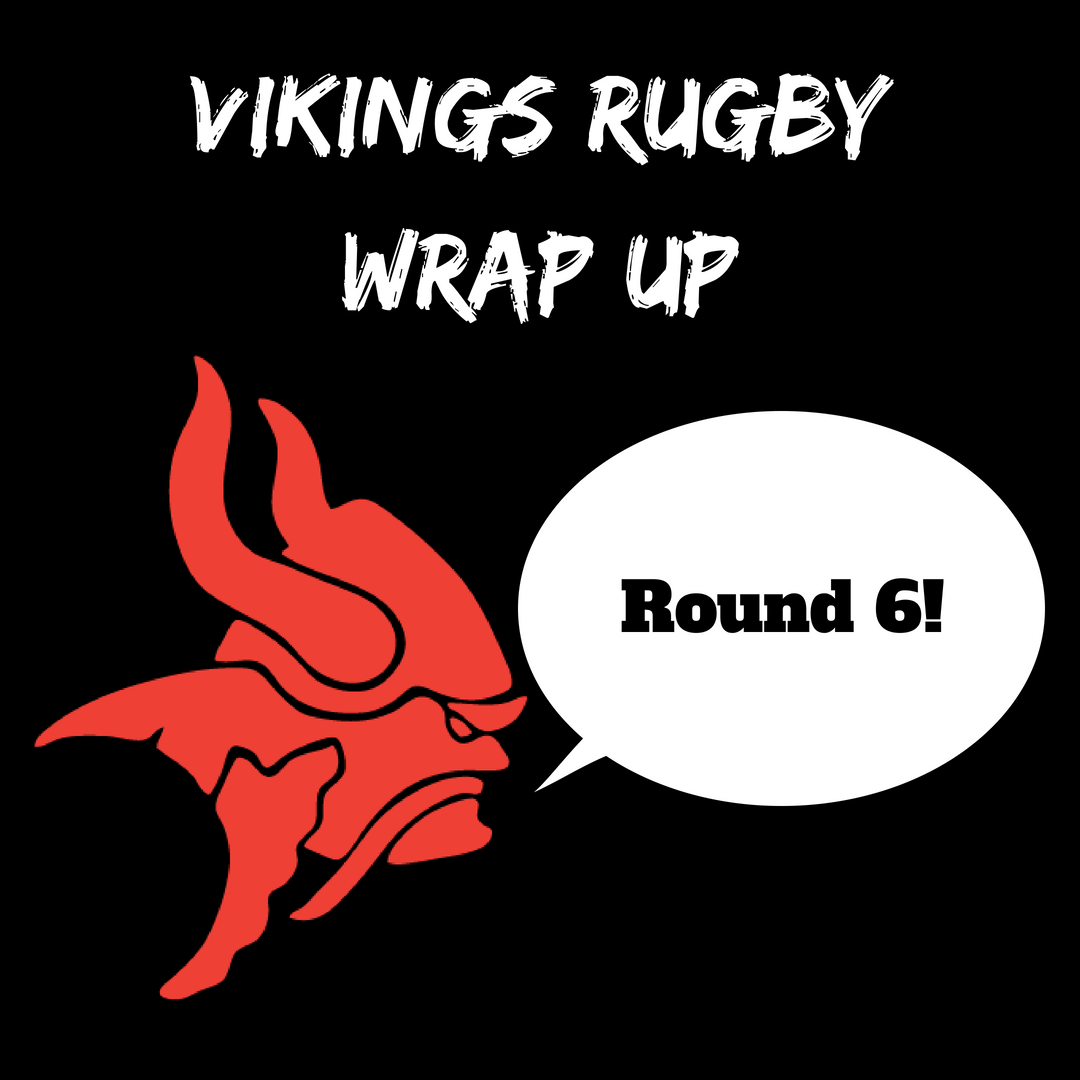 15 May Vikings Rugby Round 6 Wrap Up

Posted at 11:09h in Uncategorized by Vikings Rugby
Share

Despite the weather forecast for the weekend, nothing would dampen the Vikings spirits in a weekend that saw all Grades take home the W. The Premier Grades and 1st Division sides took on Wests out at Jamison, in what was, as anticipated, a physical encounter for all grades. Our ViQueens travelled to Phillip Oval to take on Royals in a Grand Final rematch.

Due to Jamison Oval only having one field, 4th Grade had an icy 9:45am kick off to start the day. Despite the cold, 4th Grade looked red hot, continuing their recent form with some well structured Rugby. Grant Lukins was itching at the opportunity to be crowned the Manteena Player of the Week, touching down for a hat trick and once again, shamelessly awarding himself the 3 points in the 3-2-1’s. As you would expect in wet conditions, the game was dominated by the forwards, who muscled up and dug in. Murphy Meafua made great use of the platform his forwards set him, carrying two or three defenders with him every time he touched the ball at inside centre. Wests staged a late comeback, finding themselves just shy of the Vikings 22m with little time remaining.  Matt Wafer, who returned to the field following a freak foot injury, managed to regather possession for the Vikings and ran 60m up field to set the Vikings up for a try that would secure the victory. A great start to the day, 26-20.

The Thirsty Thirds would continue the theme of the day, dominating their opposition in a game played predominately by those wearing numbers 1-10. The front row of Dan Solofa and Junior Sotogi was outstanding – both boys using their strength to continually punch through the Wests defence. A special mention must go to Siaosi ‘George’ Fakalolo, who played a full game of 4th Grade and almost a full game in 3’s following an injury to Ethan Brazel. George dotted down for a brace of tries. The forwards put in a mammoth stint, much to the disappointment of the backs who saw little to no ball. 3rd Grade were excellent at playing to the conditions, and although not a champagne game of rugby, they punched out an impressive 29-7 victory.

The ViQueens met Royals out at Phillip Oval, in a highly anticipated Grand Final rematch. The ViQueens have been superb in recent weeks and were seeking vengeance after a disappointing end to 2017 at the hands of Royals. The ViQueens didn’t disappoint – the girls were dominate in defence, conceding only two tries and teeing off on their opponents around the paddock. Ema Masi was again the star of the show, leading the forward pack in a damaging display. Remi Wilton and Carly Hill combined well to steer the ship from the halves, opening the game up for their outside backs and directing the forwards into space. The girls are reaping the rewards of some positive work at trainings, giving their 2018 premiership credentials an added boost with an 85-12 victory over the defending champs.

The Colts made a meal of their game against Wests, but continued their strong form with another impressive victory. The first half was very slow for the Vikings Colts – in recent weeks they have made light work of their opponents by spreading the ball to the fringes and playing quick ruck ball. Due to the weather, however, this proved difficult for the Vikings, who didn’t quite adapt as well as their opponents in the first half, heading into the break behind Wests, 12-14. Coach Allardyce gave his pack a necessary rev up and reminded them to play to the conditions. The Colts performed a much improved second half, building off some great phase play and looking a much more mature team. Darcy McLeod continued his impress form since joining the Colts, threatening around the opposition break down and just generally being a bully in defence. Colts took the W, 46-14.

The wet weather didn’t let up for 2nd Grade, who were facing a difficult task before even taking the field, being down a second rower and a winger. A shout out must go to Cooper Taekata and Turi Hides, who after playing a full game of Colts, filled these roles respectively. Turi had a Man of the Match performance, which speaks volumes of his potential. 2nd Grade started similarly to Colts, looking to play a style of Rugby better suited to dry conditions, but were able to adjust to the weather much quicker and play some really dominate footy. They were hindered by uncontested scrums – the 2nd Grade front row mincing opposition packs in recent weeks. 2nd Grade were still able to set a solid platform to play from and a much improved defensive effort ensured a comfortable victory. Sam Thomas continues to play like a winger in a hooker’s body, touching down for a hat trick in the match. 2nd Grade took the chocolates, 42-20.

1st Grade were determined to avenge their loss to Wests last year, who had knocked them out of the finals, ending 8 years of Grand Final appearances. As was expected, the match quickly turned into an arm wrestle, both forward packs bashing one and other at the set piece and the break down. Both teams traded points in the first half, the Vikings though getting the better of Wests and showing some great determination to hold Wests off their line. Towards the backend of the 1st Half, there was a scuffle around the Vikings 22m line, which resulted in second rower Cameron Holt being sent from the field with a Red Card, leaving the Vikings to play the match with only 14 men. The Vikings dug in deep, though, and finished the 1st half leading 19-12. The chat at half time was positive – this would be a great game to win considering the circumstances. And so the Vikings turned it on, dominating possession and territory in the 2nd half. Angus Allen had a fantastic game against his former club, revelling in the physical encounter. The most enjoyable part of the game was the final 10 minutes – with the victory secured for the Vikings, Wests picked up their intensity and put in a last ditch effort. The Vikings defence began teeing off on the Wests attack in bruising fashion – Sion Taula laid out a few players, Jayme Field welcomed a young winger to 1st Grade and the backs proved men amongst boys to close out the match, 35-17.

A very special mention to Michael ‘Chic’ Henry, who played his 100th 1st Grade game. Chic joins a very exclusive list of players in the club’s history, having a Man of the Match performance to cap off his achievement.

Thanks to Wests and Royals for hosting us for another exciting week of rugby. This weekend our Premier Grades and ViQueens have a bye, but our 1st Division sides head out to Rotary Oval to take on Cooma. If you can make the trek, join our 3’s and 4’s for some country footy! 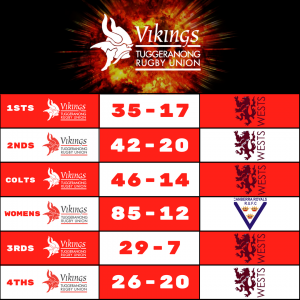