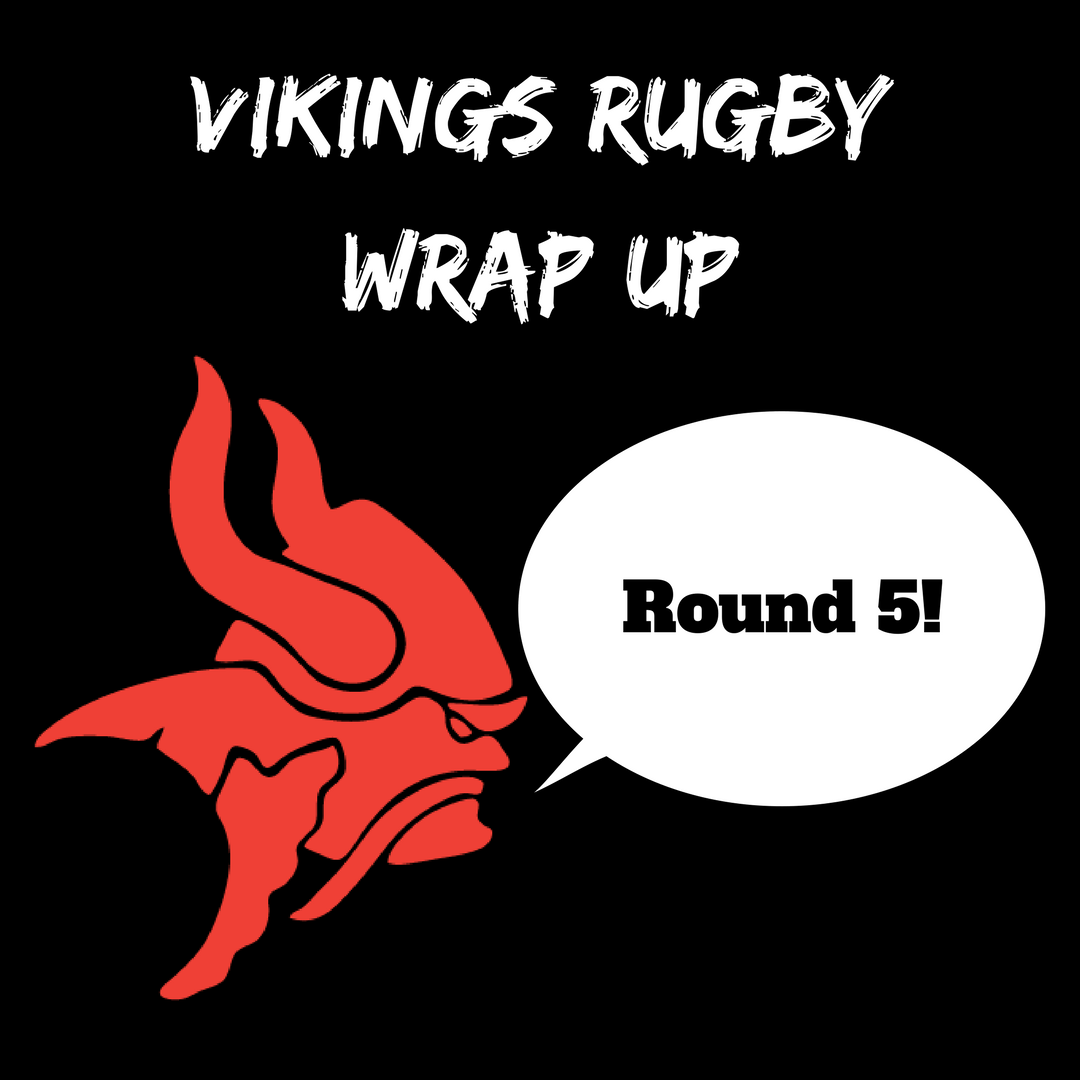 08 May Vikings Rugby Round 5 Wrap Up

It was a great weekend to be a Viking – with some solid results across the Grades and a beautiful day to match, our boys and girls gave those in attendance some exciting Rugby. A special mention to the Ladies of our extended Rugby family, who celebrated our annual Ladies Day over the past weekend. From all reports it was our biggest and best Ladies Day to date. Thanks to all the ladies that turned out on the day and enjoyed the merriment on offer – we hope you know how much we appreciate all of your continued support!

4th Grade played under the lights on Thursday the 3rd of May, to accommodate their opponents from ADFA who would be going ‘out field’ for the next fortnight. As always with a Thursday night fixture, playing numbers for 4th Grade doubled. It was a welcome return, though, for club legends Andrew ‘Chewy’ Dickson, Cameron Shaw and capped Wallaby Huia Edmonds. Thanks to the arrival of their cavalry, plus the other existing 4th Graders who have been on a hot streak, the Fiesty Fours piled the points on. Colt age player Alex Drown was pivotal for 4th Grade, performing well in the set piece and making good use of himself with ball in hand. Andrew ‘Chewy’ Dickson’s return allowed him to unfairly increase his already monumental all-time points record for the club, which currently stands at 2186; 957 points ahead of the next highest point scorer. It was an exciting game of rugby, for one side. Vikings 73-0 ADFA.

3rd Grade kicked off following the 4th Grade match under the lights, looking to continue the dominance of their club mates. But this wouldn’t prove to be an easy match for 3’s – ADFA looking slicker with ball in hand compared to previous encounters. Lua Vailoaloa and Bryce Taotua were fun to watch, displaying all their skills with ball in hand to ignite the 3rd Grade backline. It was the forward pack, however, that were proving most damaging for the Vikings – led by Dan Solofa, the forwards bashed the ADFA defence with strong, direct carries. 3rd Grade trailed at halftime, but only by 2 points. The Vikings came out firing again in the 2nd half, reclaiming the lead by a strong margin leading in to the last 10 minutes of the game. But ADFA weren’t to be beaten, their intense training giving them the edge on endurance. With little to no time left, ADFA scored a try to bring the score to 34-32, the kicker converting to bring the scores level, leaving the final score at 34-34.

The Modified Rugby Program kicked off proceedings at Viking Park on Saturday. The MRP is a program tailored to children with learning and perceptual disabilities, giving them the opportunity to pick up a footy and learn the game of Rugby. Although a small group to begin with, it was a wonderful morning with a lot of smiles. Thanks to Megan and Chyna, who came down from Queensland to run the program, Damien Tyson from the Brumbies who has assisted throughout the process and to our MRP Coach ‘Professor’ Ben Pratt. If you are interested in being involved in this incredible program, please click here for more information.

The ViQueens had the early shift against Uni-Norths, playing at 10:55am on Field 1. The ViQueens looked sharp early, thanks to the pink socks that the other Grades would also wear to celebrate Ladies Day. The game was incredibly physical – both teams facing collisions head on as the game turned into a dog fight. Ema Masi had a mammoth game at Number 8, proving solid in defense and playing brilliantly from just about anywhere she found herself on the park. It was a welcome return for Carly Hill, who was at her finest crafting the back line attack from flyhalf. The ViQueens scored early through the efforts of Captain Peta Cox, running a line off Stef Stewart-Jones to put the ViQueens up 5-0. From then on, neither team notched another point – the ViQueens were camped in their half of the field for the majority of the game, and were unable to convert on several occasions when presented with an opportunity. To the girls credit, they defended the fortress and came away with a crucial win against a determined Owls outfit. Our ViQueens remain undefeated this season.

The Colts, like the ViQueens, are undefeated this season and were looking to continue this streak against a livewire Easts opposition. The Easts pack left their mark early, playing some good footy which featured some strong carries. But it didn’t take long for the Vikings to find their groove, producing some free flowing rugby throughout the match. Angus Burns continues to impress, the aggressive prop leading the charge in a Vikings performance that was dominated by the forwards. And this was how the match played out – the Colts forwards set the platform for the backs to attack from, with the majority of the Vikings points coming from out wide. Reuben Keane played exceptionally well from inside centre, crafting opportunities for his outside backs and playing a role himself in the point scoring, dotting down for two tries. It was a fine day for the Colts who took the W, 57-21.

Similar to the Colts, 2nd Grade would find that many of their points would come out on the sting, producing some scintillating rugby through the back three. The Dirty Twos had a slow start, Easts dominating possession and taking a firm grasp of the game early. Through composure and structure, though, the Vikings clawed out of their rut and began to set the tone of the game just prior to half time. Joey Vejvoda had an absolute blinder, carrying strongly and menacing the opposition break down. The 2nd Half was a much better outing for 2nd Grade, as they shifted the ball to space and made use of the backs. It was a crucial victory after last week’s disappointing loss to Queanbeyan, final score 45-14.

After last week’s performance out at Campese, the 1st Grade side were determined to continue to build momentum. This game would prove to be their biggest test yet, coming up against an undefeated Easts side with the wind in their sails. Backed by a strong crowd at the Red Army thanks to the Ladies Day celebrations, 1st Grade started as they finished last week, threatening the Easts line with some clinical Rugby. The forward pack were immense for the Vikings, gaining the advantage line with most carries and denting Easts at the set piece. The outside backs contributed to 9 of the 13 tries, JP Mynhardt picking up 4 in an eye-catching performance. At the end of the 1st Half and the start of the 2nd, Easts mounted a mini comeback, scoring a brace of tries to keep them in the game. The Vikings however, continued to dominate with ball in hand, making quick, smart decisions from turn over ball to set a comfortable lead. The Vikings took another well earned victory, 71-24.

Thanks to Easts, Uni-Norths and ADFA for joining us for another exciting round of Rugby. We hope everyone can join us this Saturday as we take on Wests at Jamison Oval. 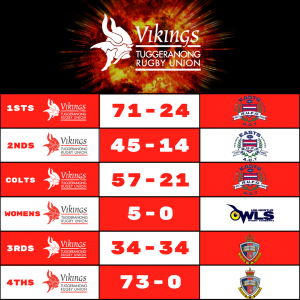