Vikings Rugby Round 4 Wrap Up 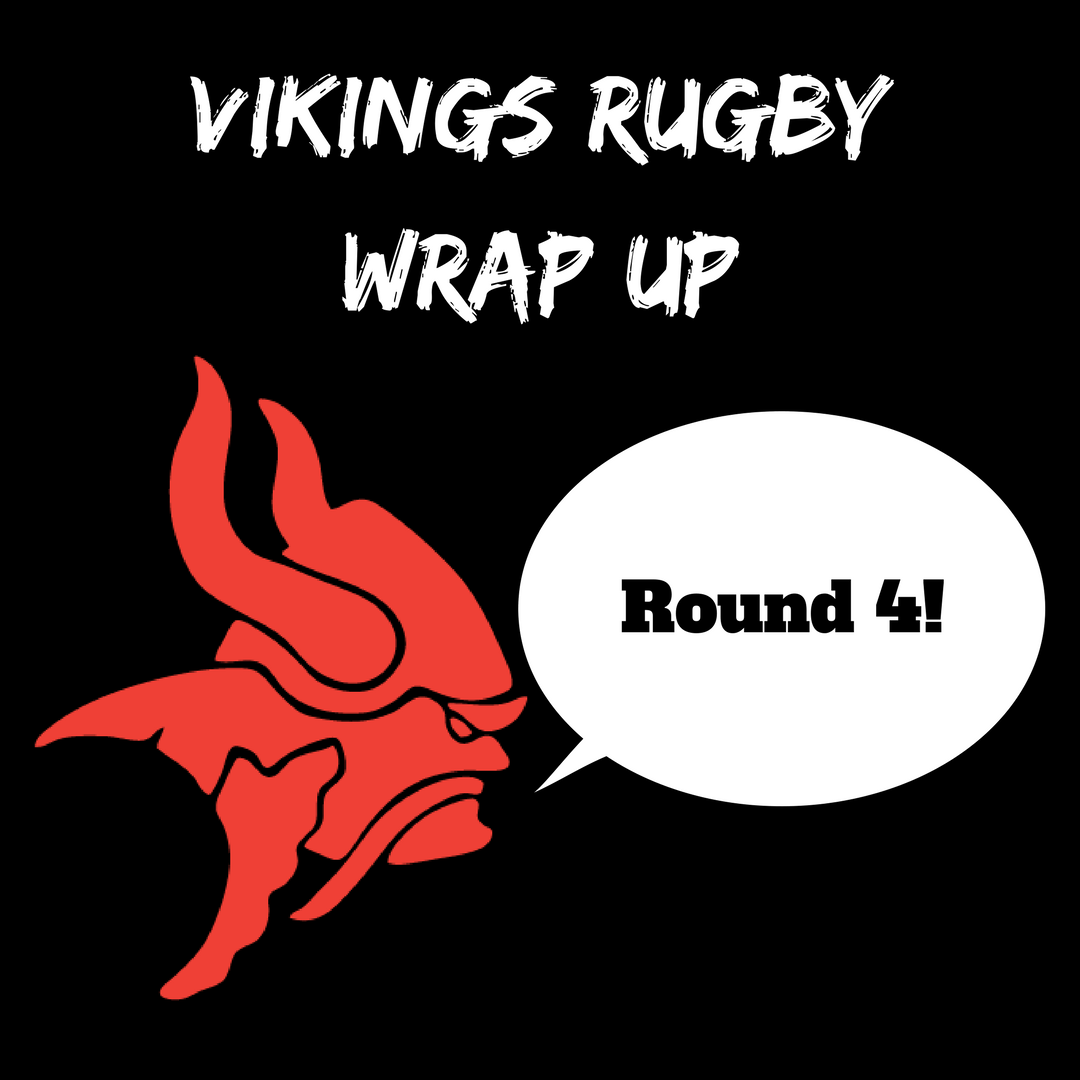 02 May Vikings Rugby Round 4 Wrap Up

Posted at 10:12h in Uncategorized by Vikings Rugby
Share

The Vikings were looking to bounce out of a less than ideal Round 3, which saw some close results across the Grades. Campese Oval was in its best condition in several years, ensuring some free flowing rugby for both teams throughout the day.

4th Grade had the early shift on Field 1, kicking off in ideal conditions. Another interesting mix of players turned up for a run in 4’s, but this didn’t stop those, young or old, from putting on a spectacle. After having notched their first win of the season last week, the boys rallied against a challenging Queanbeyan side to take the first victory of the day, 29-7. Beau Mokotupu scored a hat trick of tries in the match, proving he can still get around with the best of them. It was a welcome return for Fullback Toby O’Brien, too, who had a solid game in the back field. Grant Lukins, who is player-coach of 4th Grade, continues to show no shame by awarded himself 1 point in the 3-2-1’s. The 4th Grade win set the platform for the remainder of the day, the other Grades facing some stiff opposition.

The 3rd Grade match was hands down the match of the day – both teams performing to the final whistle in a thrilling game of rugby. The match started rather slowly for the Thirsty Thirds – they were outdone early by an eager Queanbeyan pack who seemed to score from just about anywhere on the field. Riley Banks was the spark the Vikings needed, having a stellar game from scrumhalf before shifting to the wing late in the piece. He was also unlucky not to score a sneaky try in the corner that would have brought the Vikings closer in the 1st half. The boys went into half time trailing by several tries, but a rev up from coach Gavin Sinclair and a never say never attitude placed the Vikings right back in the hot seat of this match. They say rugby is a game of two halves – 3rd Grades performance in the 2nd half epitomized this. The Vikings looked much more threatening in the 2nd half, doing what Queanbeyan had done and running and scoring from just about anywhere on the field. Dan Solofa was outstanding, making strong inroads with some dominating carries. The comeback appeared over when Queanbeyan scored a try to put them in the lead with just over 10 to go, but it was some quick recycled ball and direct running that put Riley Banks over in the corner to seal the win for 3rd Grade, 31-29.

The Colts were coming out of a narrow victory against the Uni-North Owls, looking to reassert themselves as a dominant force in their competition. It was almost the opposite of the 3rd Grade match, the Colts playing a quick 1st half and a slow 2nd. The Colts bashed and outran their Queanbeyan opponents in the 1st half, playing some mature, smart rugby. It was Billy Carberry once again who put in an eye-catching performance, scoring 18 points in the match. A sneaky box kick from Seamus Smith to Jack Evenden for a try sealed the first half, the Vikings looking very comfortable in what looked to be a promising win. But as is characteristic of their club, Queanbeyan hadn’t heard any fat lady sing – running riot in the 2nd half with the wind at their backs. Queanbeyan played an impressive half of football, but the late stand wasn’t enough to take down the Vikings, who finished 28-22 victors.

The ViQueens have been in red hot form since they began their season 3 weeks ago and were looking to continue their dominance. Unfortunately, our Girls were only able to come up with 13 players on the day – and they were facing an ADFA outfit with a full squad, out at Dowsett Oval, away from their supporter base. A gusty performance in defence and some smart attack, though, ensured our Girls took away another mammoth win. Kylie Jensen was the star of the show, having an excellent game at hooker, spurred on by her daughter, Katelyn, who suited up in the backrow for the ViQueens. The centre pairing of Charlotte Horan and Paris Robinson proved electric for the ViQueens, the two girls combining for 6 tries between them in a game breaking performance. Emily Sogal was her usual best, this week returning to flanker after a stint in the number 10 jersey the week previously. Our ViQueens pulled off a memorable win playing 13 on 15, taking the match 83-0.

The Dirty Twos were perhaps the only team coming out of Round 3 with a convincing victory, having put in a clinical performance against the Owls. Queanbeyan vs Vikings 2nd Grade is the perennial grudge match – both teams have faced each other in the Grand Final for the last 4 or 5 years and have played some spectacular footy. The Vikings started the first half well, playing some smart rugby and coming away with a strong lead going into half time. Isiah Tikitau and 3rd Grade (now 2nd Grade) legend Richard Joyes combined superbly in the backrow, their destructive ball carrying eating up meters for the Vikings and applying plenty of pressure in Queanbeyan’s half. Jack Howard, as always, was reliable with the boot, keeping the points ticking over for the Vikings. The 2nd half was a very different story – Queanbeyan, spurred on by their home crowd, put in a 2nd half thumping to close the point deficit. And from there, the points continued to pile on for Queanbeyan, who now had all the momentum and a thirst for victory. A tough day at the office for 2nd Grade, who recorded their first loss of the season, 38-24.

The Vikings 1st Grade side were determined to continue the dominance laid out by the other grades, who bar 2nd Grade had all come away with the W. This was a game that our 1’s wouldn’t disappoint in. Right from the kick off, the Vikings played some smart, structured and mature footy, building phases and strangling their opposition with an impressive defensive effort. Brendon Taueki and Joe Langtry were sharp when counter attacking, finding space for themselves and those who joined them in support. The Vikings were kicking themselves early in the piece, having given away three opportunities on Queanbeyan’s 5m line to take points. But they continued to mount pressure, heading into half time with a positive 14-3 lead. The chat from Coach Scrivener was to continue applying pressure by playing quickly and retaining possession, and as mentioned, the Vikings didn’t disappoint. 1st Grade would receive a kick off, work their way up field, apply pressure to the Queanbeyan attack in their 22 and then take an easy 3 points thanks to the boot of Brendon Taueki. It was a marvelous display of rugby, all the more special for the Vikings who were playing against a strong Queanbeyan pack renowned for their physicality and aggression when playing out of Campese. The Vikings reestablished themselves as a genuine force in the competition, taking a great victory, 29-10.

A special mention must go to Rhys Griffiths – Rhys made his 1st Grade run-on debut on the weekend, after having three Man of the Match performances in a row for 2’s. Rhys certainly didn’t disappoint, earning 3 points from Coach Scrivener, Player’s Player and the Vodafone Man of the Match award. Red hot, Rhys!

Thanks to Queanbeyan for hosting us and providing another great day of rugby. We hope everyone can join us this Saturday the 5th of May when we take on the in-form Easts at Viking Park. This Saturday will also be our annual Ladies Day, which recognizes the invaluable support that the Women of the Vikings Rugby family provide to everyone involved with our club. 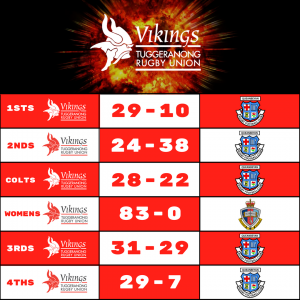