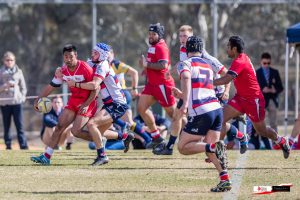 With your regular correspondent still sulking in the wake of first grade’s meek surrender on the weekend we have asked an anonymous freelance author to come in and pen the below preview for this weekend’s grand finals.

As a man of simple tastes he cites the pessimistic match reviewer for our good friends in Queanbeyan as his main artistic inspiration, and looks forward to our clashes with them in 4s and 2s this weekend.

Despite exits from 1st Grade and Colts Grade in last week’s penultimate preliminaries, the Vikings have done well to ensure 4 of our 6 senior grades made the Grand Finals; the three men’s grades and the Viqueens will go into all games as massive underdogs against stacked teams with plenty of momentum.

Fourths will commence the club’s ascent of Everest with a battle against the mythical men in white. Whilst Vikings’ form has been consistent all year, the Whites are romping into the decider on the back of a stirring victory over the heavy artillery of RMC in the preliminary final. Queanbeyan’s side is full of strong ball carriers who will look to drain the energy of the dangerous Vikings backline, with Jack Howard, John Gibson and Andrew Dickson sure to be called on to make plenty of tackles. Let’s just hope they remember how (or learn fast)! The Vikings will also be hoping that the experience of campaigners such as Montgomery, Macarthur and Shaw is enough to counteract the overwhelming energy of a youthful Whites outfit.

Third grade comes up against a Gungahlin side who in the regular season accumulated a points differential of +572 and dropped only one game. They are the unbackable favourites in this game, and it will take a monumental effort for the Red Men to be crowned premiers. That said, crafty coach Vejvoda has his team playing entertaining football at the right time of year and having already won two tough finals, they are match hardened.  Tuggeranong will be relying on strong games from Joyes, Spry and Mr Consistent Andrew Talaina in the forwards while the addition of razor sharp, lightning fast scrumhalf Blake Henman has also seen opposition teams on the back foot in recent weeks. His calm head along with the experience and aggression of Carlos Amar will give the Eagles something to think about in the backs. Dara will be desperate for some silverware as they celebrate their 50th year and 3rds will a need nothing less than a full 80 minute performance to be a chance of pulling off an upset in this one.

The Viqueens face their grand final tormentor’s Royals again in this year’s decider and know that their undefeated regular season counts for nothing on the day. Royals will be confident they have worked out the old school coaching methodology of Geoff Adam, and will no doubt have plenty of tricks up their sleeve come kick-off. The side will also be missing Wallaroo Kate Brown, whose poorly planned holiday to Ireland could not have come at a worse time for her side. The side will look to consistent performers Megan Ayres, Peta Cox, Kim Wilson and Shellie Milward in the forwards along with Major Semi Final hat-trick hero Stef Stewart-Jones as well as Sharon Waihipe, Peta Leddy and Remi Wilton in the backs get them across the line in what is sure to be a close game.

The reserve grade decider will see Tuggeranong take on Queanbeyan for the 5th consecutive season. The Whites, as they do every year, have hit their straps at the right time, playing their best game of the season at the weekend where they comfortably accounted for Royals. Their side, who will enter this match as heavy favourites, is full of seasoned veterans and owes a great debt to Queanbeyan’s most eminent legal minds, whose mastery of the loopholes of the competition’s eligibility laws sees a number of their regular first graders in the mix. Coach Yanuyanutawa, despite last being seen desperately trying to get in touch with his cousin Tevita Kurindrani to confirm that our eastern neighbours were unsuccessful in their bid to spring him from Wallabies duties, will have confidence that his sides’ best will give them a fighting chance. Proven grand final (and beyond) performer Callum Smith will lead from the front, and Vikings fans should expect running mate Joey Vejvoda and young standout Jayme Field to be right behind him. Ryne Bowden, himself looking forward to whatever new height related sledges the White army unveil this weekend, Trai Henderson and Sam Giltrap loom as key men in the red backline.